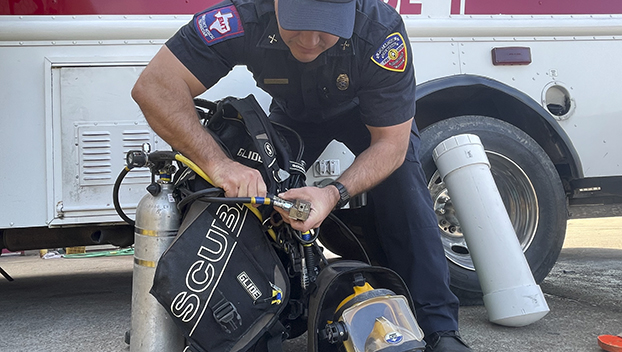 Local firefighters have been in the news a lot of late, from saving lives to recovering submerged vehicles, thus showing just how vast their duties really are.

Earlier this week in Groves three firefighters were recognized for their response to a man experiencing signs of a heart attack.

Groves firefighters Josh Nelson, Daniel Callesto and Curtis Trahan responded to a 9-1-1 call May 12 to property owned by United Board of Missions in Groves. The property is on the market, and Debbie Russell is the Realtor. She was there with her husband James, when he began feeling ill.

The woman was distraught and initially called Debbie Perkins with UBM, who quickly advised her to call 9-1-1.

The firefighters who are also EMT’s arrived within three minutes and began working on James and helping keep him and his wife calm.

The firefighters worked until an ambulance arrived and brought him to a local hospital.

James spent six or seven days in intensive care and had stints placed in his body to help his heart.

FOR THE STORY: Firefighters respond in 3 minutes; save man suffering from heart attack and no path to hospital

The Port Arthur Fire Department has a new life-saving device, the AutoPulse, which has already been used to save a life during a cardiac arrest event.

The automated CPR device performs chest compressions through a vest that wraps around the patient. During the recent emergency, firefighters used the device to fully resuscitate a patient in 15 minutes.

PAFD now has two of the devices and is the only department in immediate area to have them. Beaumont Fire Rescue has a piston-based device.

RELATED: Port Arthur firefighters use new technology to save woman in her 70s in full cardiac arrest

The PAFD also has a team of specially trained divers who take part in rescues, recoveries, and even investigations.

Currently the department has 12 master underwater criminal investigators, one dive master and three entering the dive master program, according to a previously published story.

Our editor, Monique Batson, had the chance to talk with some of the specially trained individuals a few months ago and learned the divers don’t just rescue and recover; they conduct full crime scene investigations far beneath the surface of the water.

By using hand-created containers, divers are able to retrieve weapons and preserve them in a way that, even though they were submerged in water, fingerprints can still be obtained. Grid searches on the bottom of a body of water locate bullet casings, and sometimes, even teeth.

Visibility is low in the local waters, another hurdle for divers to deal with.

And in the past week or so four vehicles have been recovered from local waters, two of which had human remains.