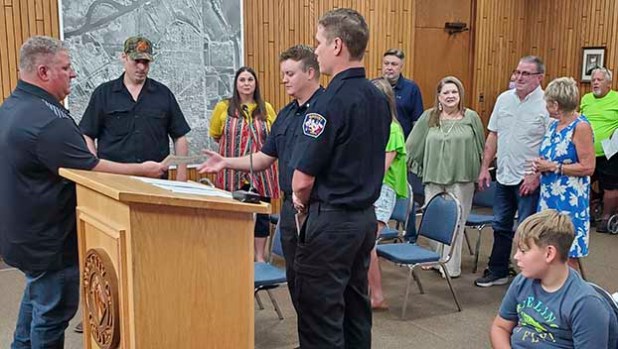 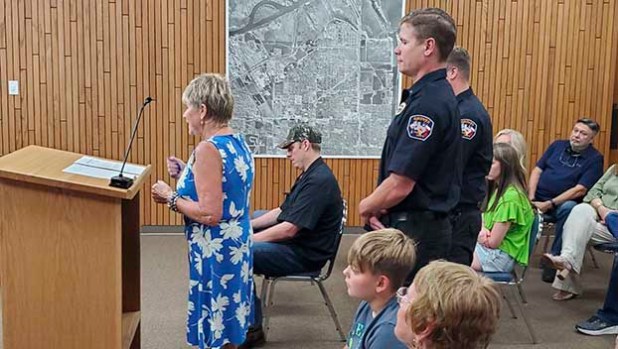 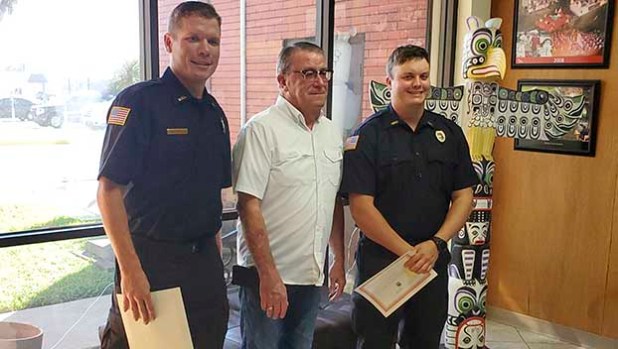 James Russell, center, stands between Groves firefighters Josh Nelson, left, and Daniel Callesto, right, who helped save his life when he was experiencing symptoms of a heart attack recently. Firefighter Curtis Trahan was unable to attend the meeting. (Mary Meaux/The News)

GROVES — James Russell doesn’t remember much of what happened when he began experiencing symptoms of a heart attack.

Russell was remembering the Groves firefighters/EMTs who, on May 12, responded to his wife’s 911 call.

On Monday those firefighters — Josh Nelson, Daniel Callesto and Curtis Trahan — were recognized for their lifesaving work during the Groves City Council meeting. Debbie Perkins, executive director of the United Board of Missions, explained what happened.

James and his wife Debbie Russell were at property owned by UMB at 5235 39th St. in Groves. The property is on the market, and Debbie Russell is the relator, Perkins said.

It was the heat of the day and the Russells were at the property when James began feeling ill.

“They immediately began working on him,” Debbie Russell said. “They were calming me down. I’m very grateful for them to be there.”

The firefighters worked on James until an ambulance arrived and brought him to a local hospital.

James spent a week in intensive care and had stints placed in his body to help his heart.

“I came through with flying colors. It was touch-and-go for a little while,” James said.

Mayor Chris Borne presented the firefighters with certificates of recognition for their work and thanked them for all they do for the city.

Trahan was unable to attend the meeting.

Though the firefighters were pleased to receive the recognition, they said it’s not the reason they do what they do.

“We don’t look for praise. It’s our job and what we train for,” Nelson said. “We’re glad to be there to help and it’s even better with a positive outcome. Everybody works well as a team.”

“We appreciate the praise we get but we definitely don’t look for it,” Callesto said. “None of us got into this for the recognition.”