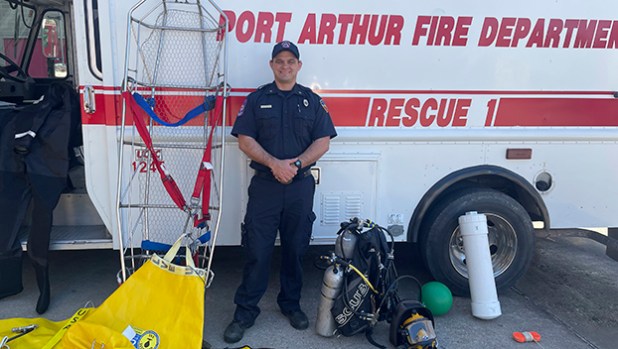 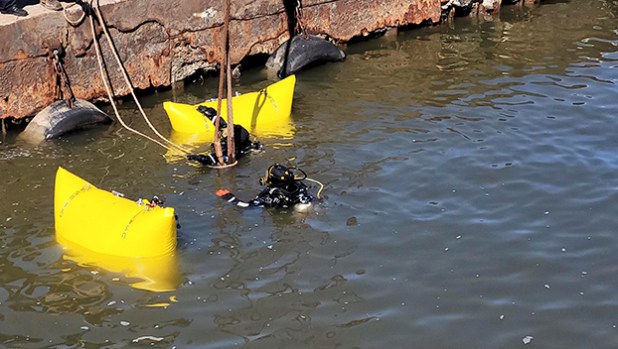 Divers from PAFD recover a vehicle from the Sabine-Neches Waterway in February. (Courtesy photo) 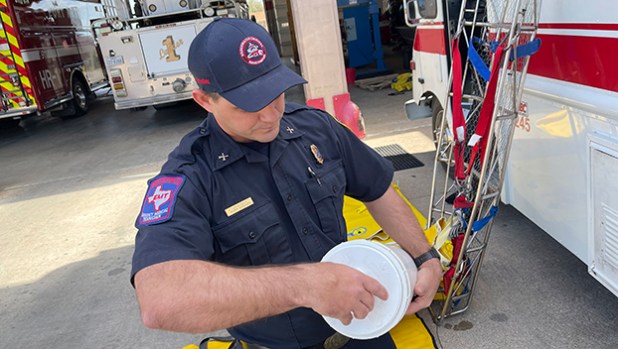 Sealed containers made at PAFD are used to recover weapons tossed in water. By keeping it in water, fingerprints can still be retrieved from the weapon. (Monique Batson/The News) 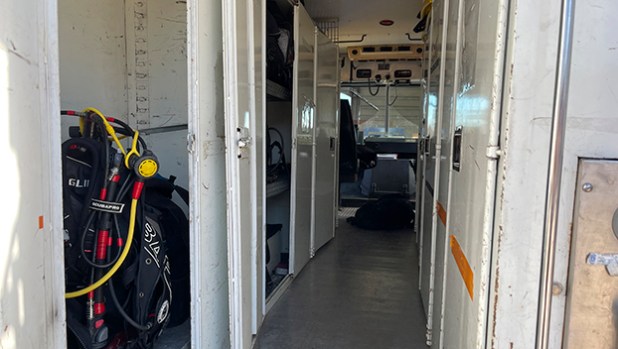 The Port Arthur Fire Department has been approved to buy a new dive/rescue vehicle to replace the current one made in 1996. It has no heat, no seats, inadequate storage, among other issues. (Monique Batson/The News) 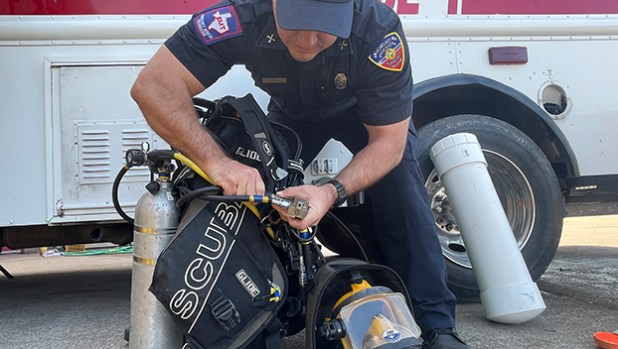 A diver with the Port Arthur Fire Department entered the Sabine-Neches Ship Channel in January in an attempted recovery. But he soon after got entangled in old metal and ended up underneath a concrete pad beneath the surface.

Simultaneously, a military vessel was coming through the ship channel.

But the diver wouldn’t know that; he couldn’t see.

“In the water here, unless you’re very lucky, visibility is six inches or zero,” said Capt. Joshua Reswebber. “All of this is done with our eyes closed wearing extra equipment. That’s why training is so important, to make it safe for the diver and to make you proficient in your skills when you’re in the water.”

Reswebber, who has been with the department since 2005, earned his scuba certification in 2013. It’s one of several certifications divers earn ranging from the ability to dive 60 feet to operating metal detectors underwater.

“The end goal is to become a master underwater criminal investigator,” Reswebber said.

With that comes the ability to conduct criminal investigations, lift weighted bodies and lift vehicles.

About a week after the January recovery attempt, a dive team entered the ship channel to retrieve a vehicle.

“We’ll send divers down and they’ll connect to one side — either the driver or passenger side of the vehicle,” Reswebber said. “They’ll float it, so it’ll be sideways. If you just grab four tires and float it, because of the weight of the engine, the car will always end up upside down. That’s why we bring it up sideways, and then we attach and flip it upright to maintain evidence inside the car.”

“You see four of (the divers) pop up out of the water and the vehicle is right there,” he said.

And, he added, it’s part of an integral underwater operation the general public might not know exists.

The divers don’t just rescue and recover; they conduct full crime scene investigations far beneath the surface of the water. By using hand-created containers, divers are able to retrieve weapons and preserve them in a way that, even though they were submerged in water, fingerprints can still be obtained.

Grid searches on the bottom of a body of water locate bullet casings, and sometimes, even teeth.

Recovering the vehicle in February required a 38-feet dive — the deepest to date.

“Typically, unless you’re in the ship channel, we’re diving between 15 and 20 feet,” Reswebber said. “Anytime we get in that ship channel, it goes as deep as 48 feet. Once you dive deeper, you consume air faster. At about 33 feet, every breath you take is breathing in twice the amount of air out of your bottle. The pressure makes the air more dense.”

Adding in lack of visibility and water temperature only creates more challenges.

At times, the water drops below 48 degrees.

That can be problematic, considering the current dive rescue vehicle doesn’t have a working heater.

The Port Arthur City Council this week approved the purchase of a 2022 Dive Rescue Vehicle to replace the department’s current model, which was manufactured in 1996.

“It’s old and has a lot of issues. It’s not reliable,” Reswebber said. “We’ve had issues with it not starting or having engine problems. When we try to go up any of the bridges, it struggles. And I can’t pull anything behind it. If I try to go up one of the bridges with a boat behind this, we’re probably going to end up going backwards.”

Because there’s no heat, the team typically brings a pickup to warm divers once they’ve resurfaced.

Limited storage space only allows for 70 percent of the necessary equipment. And because there are no seats, divers are putting on equipment while standing in a moving vehicle.

“It’s unsafe, but our guys do what they have to do,” Reswebber said. “This thing, the suspension is really bad on it. I say it’s like driving a clown car. If you’re back here getting dressed… we’re lucky we haven’t had anyone injured yet.”

The new vehicle, which has been designed by Municipal Fire Apparatus Specialists LLC in McAllen, will have inside seats that allow divers to be secured in the van while putting on their gear. Equipment inside can be reached from outside. And a retractable hose allows air tanks to be filled at the diver, not at the truck.

“If you’re down at the water’s edge, this stuff is heavy,” Reswebber said. “I dive — not just counting the weight of the pack — I dive with an additional 22 pounds. So a guy has to lift that pack up and carry it all the way (to the truck) to refill it. Our new dive vehicle will have a hose that will stretch out up to 250 feet so we can fill scuba tanks at the water’s edge.”

The van, which will not arrive until next year, has a projected 15-year lifespan.