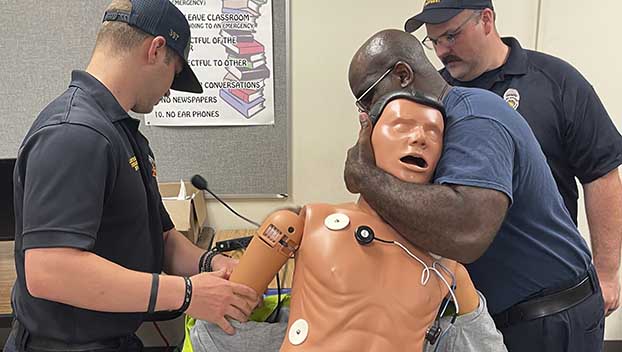 Engineer Layne Miguez, from left, Capt. Ura Lara and Firefighter Aaron Renner strap the AutoPulse to a dummy during a demonstration in July. (Monique Batson/The News)

A new life-saving device secured by the Port Arthur Fire Department successfully resuscitated its first patient, one day before it was scheduled to enter service.

The AutoPulse, an automated CPR device that performs chest compressions through a vest that wraps around the patient, was used Sunday during a cardiac arrest event.

Fire Chief Greg Benson said a call came into Station 8, which is located on 9th Avenue, regarding a woman who was choking.

She ultimately went into cardiac arrest.

Capt. Jeremy Kasko, who was at Station 6 less than two miles away, heard the call on the radio and carried the AutoPulse to the scene.

Station 6, Benson said, is one of two locations with an AutoPulse, the other being Station 1 on Woodworth Boulevard.

On scene Sunday, with use of the machine, firefighters were able to fully resuscitate the patient within 15 minutes.

The two machines were acquired last month following funding from City Council and are the only two automatic CPR devices used by a fire department in South and Mid County. Beaumont Fire Rescue has a piston-based device.

The vest provides more consistent compressions than individuals can when having to rotate to avoid exhaustion, and also reduces the possibility of damaged or broken bones.

That, Benson said, was important Sunday as the patient was in her 70s and at risk for damage to her sternum or ribs.

The AutoPulse did not cause any injuries, authorities reported.