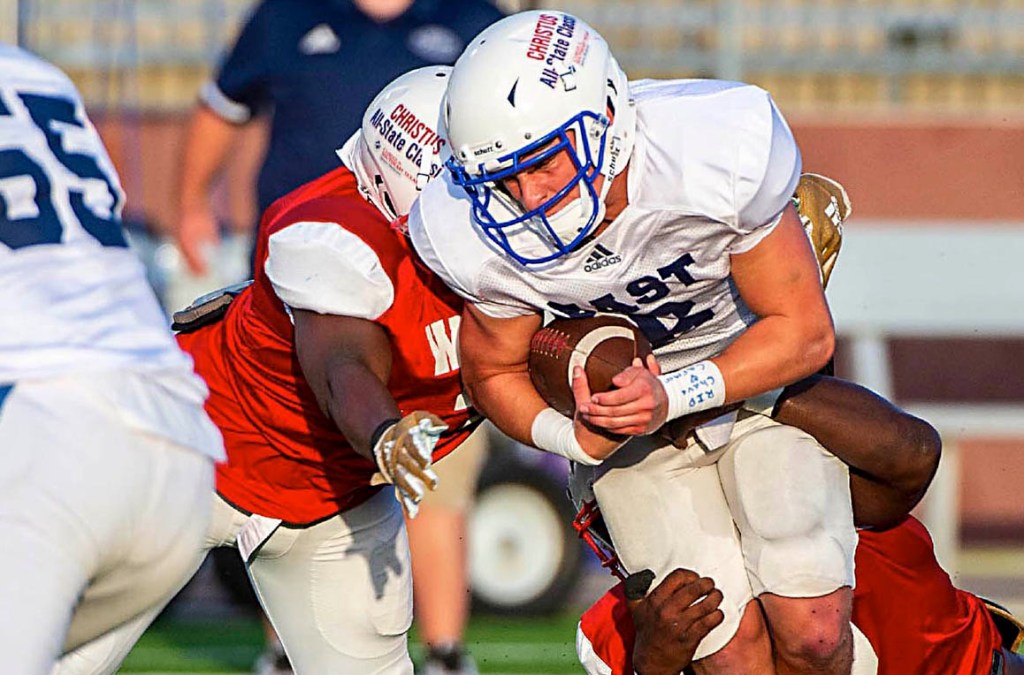 Nederland’s Blaysin Fernandez (6) takes the ball up the middle for the East during Saturday’s Christus All-Star Classic football game in Beaumont. (Brian Vincent/Special to The News) 6-15-19

BEAUMONT — Blaysin Fernandez might be hanging up his football cleats for good, but the recent Nederland graduate never lost the fire.

Blaysin’s blaze was evident in Saturday’s Christus All-Star Classic game at Beaumont ISD Memorial Stadium. Fernandez completed 7 of 10 passes for 167 yards, and two touchdowns, including a 26-yard scoring strike to Port Neches-Groves’ Jose Ceja, while leading the East to a 17-7 victory over the West.

“I loved every minute of it,” Fernandez said. “I knew it was my last, so I had to show out.”

Ceja enjoyed the connection with his longtime rival from the Bum Phillips Bowl, which PNG has won two of the past three seasons.

“It feels great to feel that connection. That PNG-Nederland and all that stuff aside, man, he’s a great quarterback, nonetheless,” Ceja said.

That wasn’t Fernandez’s biggest play of the evening. One play after the West missed a 35-yard field goal attempt, he hooked up with Silsbee’s Jalen Davis for an 82-yard catch-and-run to pad the lead to 17-7 with 7:08 left in the game.

Three athletes from The News’ coverage area have won East team MVP awards in this year’s All-Star games: Caitlin Denison of Bridge City in softball, Landon Hiltz of Nederland in baseball and Kaitlyn Gil of PNG in volleyball. Little Cypress-Mauriceville QB Adam Pope was named East team MVP after rushing twice for 8 yards and completing 1 of 2 passes for no gain, and cornerback DeMarcus Coleman of West Brook (one interception) was named East defensive MVP on his home field.

Fernandez completed six passes for first downs, connecting on his first two attempts to Kelly’s Tyson Nonette for 23 yards. Ceja, who dropped the very next pass from Fernandez, made up for it with three catches for 47 yards (all in the first half), including the TD score on a go-route with 21.8 seconds left before halftime.

“I dropped that first one, and I told myself, I have to go back and get another one,” Ceja said. “That last one happened to be a touchdown. It felt good. It’s nothing better than scoring.”

“As soon as we scored, I said it’s all because of the ‘N’ on your helmet,” Fernandez said.

The East went ahead 3-0, 1 minute into the second quarter, on a 55-yard field goal attempt from Kelly’s Philip Leano.

The East secondary made its best case for combined defensive MVP honors with three of its four interceptions coming before halftime. Teshaun Teel of West Orange-Stark picked off Slack at the East 1, ending a 14-play, 65-yard drive.

West cornerback Vernon Hartfield nearly returned the favor on the following third down. Pope then avoided a safety by throwing to his running back, but Hartfield almost scooped up the drop for a short gallop across the goal line.

That was no problem for the East. Camryn Adams of Jasper caught a wide-open interception from Woodville’s Reese Shaw and returned it 28 yards.

That set up the East’s first touchdown drive, completed in six plays and 2 minutes, 18 seconds.

Slack, the West offensive MVP who completed 9 of 18 passes for 85 yards, was picked off again by Coleman the next play from scrimmage. He threw another pick to Silsbee’s Cameron White in the fourth quarter.

Slack had a stronger second half, turning in a 29-yard run and completing a 15-yard pass to Splendora’s Jessie Paris on fourth-and-10 to the East 15. Two plays later, he fired a 15-yard TD pass to East Chambers’ Kordell David (four catches, 39 yards).

Kavyn Cooper of West Orange-Stark carried 11 times for 21 yards for the East. Paris caught two passes for 15 yards and rushed 11 times for 40 yards, while Slack carried the ball 12 times for 62 yards.

Minter carried the U.S. flag during player introductions, as he often did in the regular season through the Indians’ breakthrough sign. Minter will enroll in LSU’s ROTC program and study nuclear engineering.

The SETCA is the organizing group behind this week’s All-Star games.