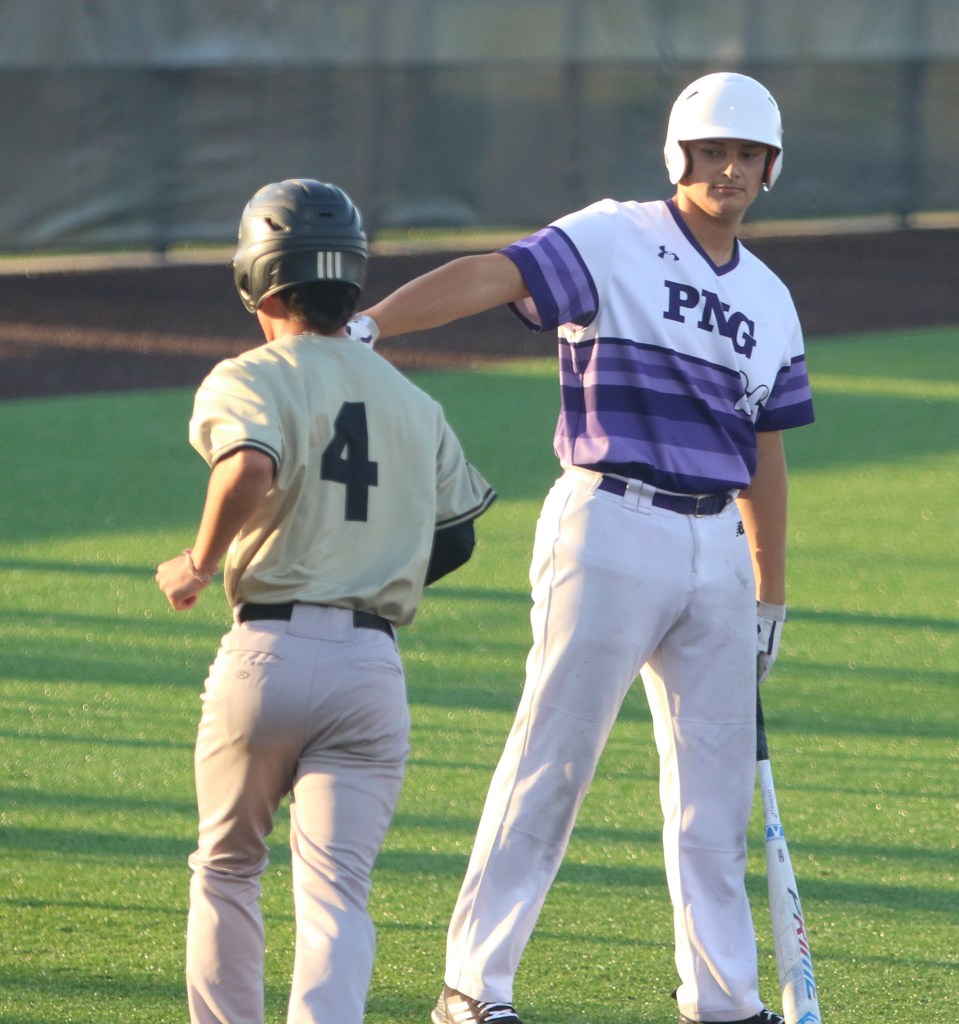 Less than a month after competing against each other in a heated playoff series, PNG's Hunter Hranicky congratulates East All-Star teammate Landon Hiltz on scoring the first run of the Christus All-Star Classic game Thursday. (Michael Sudhalter/Special to The News)

CROSBY — A trio of Nederland teammates enjoyed teaming up one last time in the Christus All-Star Classic on Thursday night at the Ballparks in Crosby.

The quartet represented the East team, which came back from a 3-0 deficit but fell, 4-3.

“It was a fantastic game,” said East head coach Jim Sherman of Buna. “There was a lot of great kids and great attitudes.”

Sherman credited Trahan with keeping the East in the game. She pitched “against the heart of the West’s batting order” in the third and fourth innings, allowing just one run.

Grumbles, who singled for one of the East’s four hits, had a chance to catch Trahan one last time. This fall, they will be separated by 181 miles of Interstate 20 with Trahan playing for Weatherford College and Grumbles, for Kilgore College.

Newby joked that “it wasn’t that bad” playing alongside her former rivals from Nederland. Next season, Newby and Eversole will be teammates at Navarro College in Corsicana.

Nederland’s Landon Hiltz was honored to be the Most Valuable Player of the Christus All-Star Classic baseball game on Thursday night.

Hiltz scored the first run of the East’s 7-4 victory in the first inning. He capped the East’s six run sixth inning when he scored on a sacrifice fly.

The Coastal Bend College commit said he enjoyed playing alongside his Nederland teammates and former rivals from Port Neches Groves.

The East pitchers collectively took a no-hitter into the bottom of the seventh inning. Once the West got its first hit, they put together a significant rally.

The West trailed 7-4 with two outs in the bottom of the seventh when Hardin-Jefferson’s Justin Smith smashed a ball to right field. The West would have cut it to 7-5, but Smith was called out trying to reach second base.

East head coach Scott Carter said it was a fun experience to coach in the game, including the opportunity to lead his PNG Class of 2019 players one last time.

The football game is slated for 7 p.m. Saturday at Beaumont ISD Memorial Stadium.