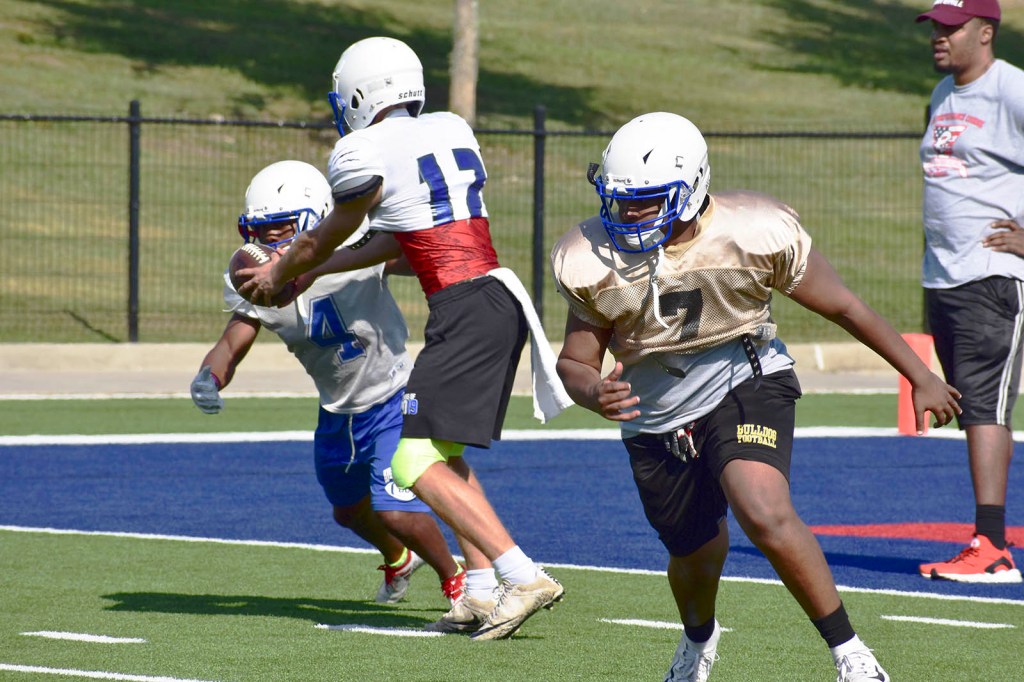 Turns out, the recent Nederland graduate will lace up the cleats one last time just up the road from home.

“After the school year ended, I got called up and they asked me because they needed another fullback,” said Douglas, who’s been splitting his time between fullback and tight end for the East team in preparation for tonight’s Christus All-Star Classic at Beaumont ISD Memorial Stadium.

Douglas has reunited with two of his fellow Bulldogs, quarterback Blaysin Fernandez and defensive lineman Hunter Sonnier, for one final game. But that’s just it — neither of them, nor Port Neches-Groves’ Jose Ceja or David Minter, will go on to play collegiately.

“It feels pretty good to come out and see everybody come together,” Douglas said. “All the seniors, it’s a good moment to be around everybody.”

Randy Smith’s Silsbee staff is coaching the East team against a West club by Russ Sutherland and his East Chambers coaches.

Those from Mid- and South County who will play in college are working out for preseason camp, including early University of Texas enrollee and PNG graduate Roschon Johnson. That left Ceja, a wide receiver going to Lamar in the fall, catching passes from Fernandez.

“Yeah, it’s kind of crazy,” Ceja said. “I’m still adjusting to quarterbacks, not just Blaysin, but all the other quarterbacks here. It’s all different from the way I’m used to being thrown passes to.”

Still, a PNG wideout who caught 12 touchdown passes and 925 yards from a three-time district and three-time The News Super Team MVP is pairing up well with a Nederland quarterback who went 20-5 as a starter and threw for 1,011 yards and nine touchdowns as a senior.

“I’ve always grown up with him, so it’s nice coming out and throwing routes to him,” Fernandez said. “It’s something new.”

Minter is joining forces with Sonnier on the d-line before taking off for LSU’s Reserve Officer Training Corps program to study nuclear engineering. Minter often carried the American flag onto the field from the Indians’ breakthrough sign before kickoff.

“I was looking at the Naval Academy,” Minter said. “A close friend of mine, he was going for the same thing I am, to study nuclear engineering, and he kind of swayed me to go to LSU. The Naval Academy is more of military. It’s straight military with a little bit of college. LSU’s ROTC is more college with a little bit of military. That way, you get to actually have the experience.”
Minter’s family has always been around submarines, which led him to his chosen field.

“In nuclear engineering, you get to run submarines and travel the world,” he said.

Sonnier thought about playing collegiately for a long time. In this, one last game for which he’ll suit up, has been pleased with the defensive line.

“We’re physical,” he said. “We’re more physical than the other team.”

For one last time, a defense will try to help out Fernandez’s offense.

“I feel like it’s an honor to be nominated for this and meet all these new people you’ve always played against,” Fernandez said. “This is the team you’ve been scouting your whole life, your high school years, and finally coming up and competing with them, it’s a good feeling.”