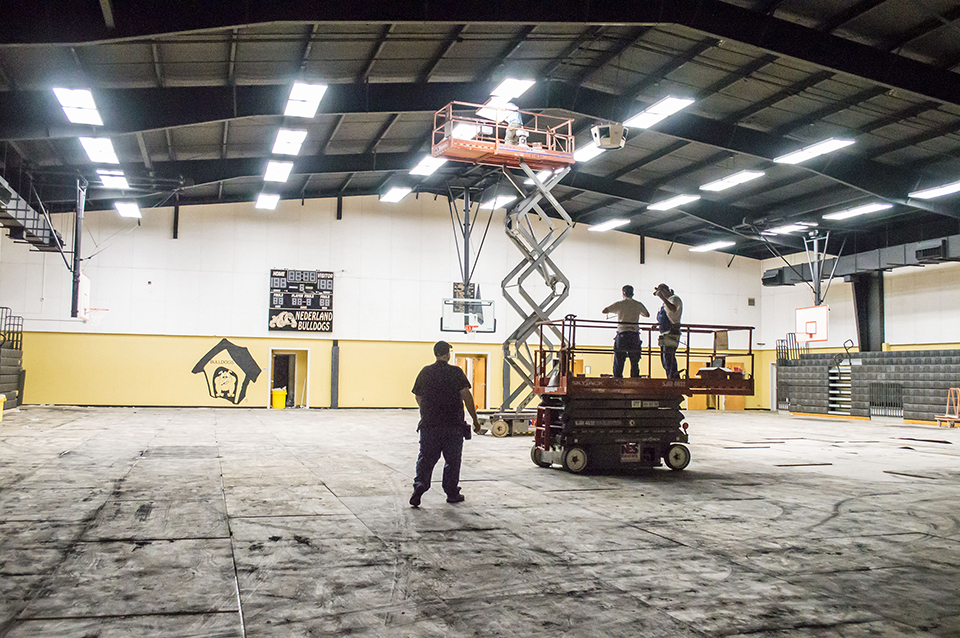 While students try to squeeze in their final hours of summer, Southeast Texas teachers are putting the finishing touches on lesson plans and — if they’re lucky — catching up on rest before school begins Monday.

Educators in the Nederland, Port Arthur and Port Neches-Groves Independent School Districts have spent the last few weeks re-establishing their classroom presence by attending training and in-service sessions, and building themselves up through motivational speakers, “leadership gurus” and group seminars.

Some teachers are entering the school year with mixed emotions, a mass of mechanical energy fueled by months of preparation, anticipation for a fresh start and uncertainty about how to take care of an ever-increasing student population with limited resources.

To offset the increase, each district has dedicated the summer to restructuring campuses to meet the needs of their respective communities — and by extension, charting new courses for the future.

The Nederland Independent School District kicked off its summer by revving up renovations at Nederland High School.

Once the 2015 graduates walked the stage, construction-manager-at-risk H.B. Neild & Sons, Inc. could devote full days to upgrades and additions mapped out in the district’s 2012 school bond — a $28,590,000 total package approved by voters in two separate propositions.

“As soon as school got out, we came in here hard,” Brent Price, H.B. Neild & Sons, Inc. superintendent, said at Nederland High School Friday. “Just about everything in the ceiling and in the mechanical rooms that you don’t see is brand new — lights, HVAC, security cameras in all critical spaces, and we’re putting in the last of the wireless access points now.” 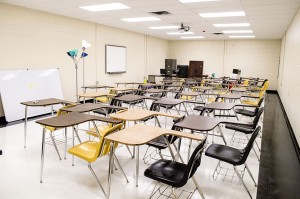 Price said nearly all the renovations scheduled for the campus were geared toward energy and efficiency upgrades, but H.B. Neild & Sons also tackled some restructuring needs to better serve the students and teachers of NHS.

“We’ve restructured several rooms, making them larger and creating classrooms that just make sense,” he said. “We’ve also added two new classrooms, moved two departmental offices back into their departments and created emergency exits in departments that didn’t have them before (a change that eliminated several dead ends in several department wings).

“The basketball dome looks completely different. We’ve already got the Performing Arts Center, so we don’t need this old stage anymore. We’ve pulled all that out to give the school some much-needed storage space and expand the actual gym floor. We painted everything in appropriate school colors, which gave the whole area a fresh feel.”

Price said there are several “punch list items” H.B. Neild & Sons will finish during the school year after hours and on weekends. 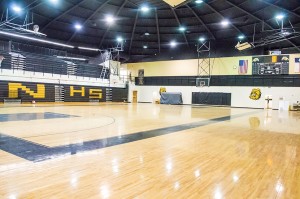 H.B. Neild & Sons gave the Nederland High School Dog Dome a face lift this summer with energy efficiency upgrades and new paint. The company is still renovating the old stage area, extending the gym floor to where the stage used to stand and painting an extensive mural on the new wall.

“All of our teachers are extremely excited and working very hard to make the school presentable and safe,” Steven Beagle, Nederland High School principal, said Friday. “We appreciate all the hard work from H.B. Neild & Sons and all of our custodians for making this campus look so great in a very short amount of time. We’re fortunate to be so far along at the beginning of school, and we’re excited to show all the students what we’ve done this summer.”

Michael Laird, NISD assistant superintendent for personnel and auxiliary services, said every class will meet in the main campus Monday and the portable buildings will be carted away.

Laird said the punch lists for the other NISD schools have all been completed, and he expects the high school renovations to be fully finished by winter break.

The Port Arthur Independent School District staff spent much of the last school year planning for the district’s $195 million bond, which Port Arthur voters passed in November 2014 to give the district some needed growing room.

The bond will finance three new schools and renovations to more than 11 PAISD campuses and facilities — a change PAISD Superintendent Mark Porterie has promised will eliminate the growing “portable cities” throughout the district — as well as district-wide technology infrastructure and security improvements, energy and efficiency upgrades, and new school buses to replace the district’s dying fleet.

Chris Koeper, senior manager at Skanska USA Building, Inc. — the firm selected by the PAISD board of trustees to oversee the entire life of the “full bond,” totaling $135 million in projects that require an architect, engineer or construction manager-at-risk to complete — said the first projects coming down the pipeline will be the three new campuses for William B. Travis Elementary, Sam Houston Elementary and Memorial Ninth Grade, followed by major renovations at the old Woodrow Wilson School in downtown Port Arthur. 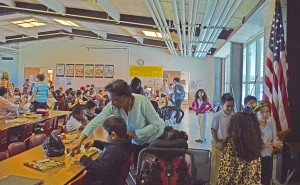 The 700 students at Sam Houston Elementary School adhere to a strict lunch schedule in order to gain a few inches of elbow room inside school’s 50-year-old cafeteria. Sam Houston Elementary is one of three Port Arthur Independent School District campuses that will be rebuilt as part of the district’s 2014 $195 million bond.

Skanska released a PAISD bond website toward the end of the summer to keep the community abreast of all developments, large and small, with the bond package.

Memorial Ninth Grade is still listed in the planning stage with some schematic design already in the works.

In a community conversation on student discipline earlier this month, Porterie told students at William B. Travis Elementary School they would move into portables this school year while their aging campus is torn down to make room for the new facility. 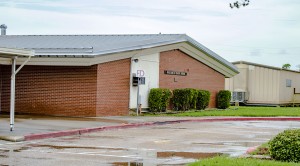 William B. Travis Elementary School is one of three Port Arthur Independent School District campuses that will be rebuilt as part of the district’s $195 million bond.

“Every year is exciting, but we’re really going to have a lot going on this year to get excited about,” Porterie said Saturday. “Of course, we’ve got our school bond projects chugging along. We’ve looked at our data, and we’re looking forward to making some changes this year.

“The teachers have been busy in their classrooms getting ready for Monday, and we’re all excited to welcome our students back from summer break. We’re looking forward to a great school year.”

The Port Neches-Groves Independent School District is kicking off the new school year with a new — and throwback — assigned campus scheme.

Beginning Monday, PN-GISD students enrolled in pre-kindergarten and the preschool programs for children with disabilities will not attend class at their zoned elementary school, but at the West Groves Education Center.

“This is a new, old change for us,” Gonzales said Thursday. “Our youngest students used to all go to school in the West Groves Education Center, but we moved them into their respective elementary schools in 2010. At the time, our enrollment at some of the campuses had gone down, so we decided to move the pre-k and PPCD students in to use those classrooms.

“But in the last five years, our enrollment has gone up and up, and we need the room in those classrooms again. We don’t have a school bond right now, so we’re not getting brand new schools or doing any serious renovations to make our existing campuses larger. The easiest thing we could think of to give us more room in those elementary schools was to move our pre-k and PPCD students back into the West Groves Education Center — where they used to be.” 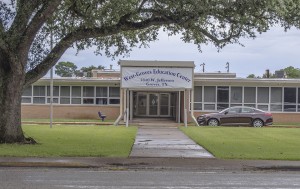 Gonzales said he thinks the transition will be painless for incoming students, because they’re “just starting out.” They haven’t been to school before to know they won’t be in the same classroom as they would have last year.

“That’s the good thing about it. All of these students are very young — like, 4 years old — so we won’t be messing up their schedules or changing much for them,” Gonzales said. “We’re excited to have all our teachers moved in over at West Groves, because we need all the room we can get for our K-3 students at our other elementary schools.”

Gonzales said the district has high expectations set for the 2015-16 school year, but the teachers understand the first few weeks of school are some of the hardest for students.

“The busiest time of the year is always the first few weeks and the last few weeks of school. If we can just get through these first few weeks, we’ll be OK,” he said, laughing. “We have to get back into the school routine, so we can stay focused — we all know it’s not an overnight thing. But once we do that, we’ll be in great shape for the rest of the year.”