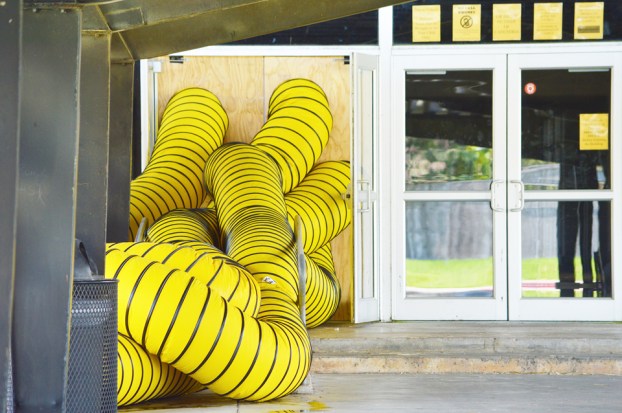 NEDERLAND — Big Ned’s doghouse is about to get a major overhaul.

The Nederland Independent School District has been maneuvering its 2012 bond work on the high school around the school schedule. Now that the 2014-15 school year is over and the seniors have all flipped their tassels and walked away, construction manager-at-risk H.B. Neild & Sons, Inc. is ready to go full throttle.

H.B. Neild & Sons and Ronnie Jones, president of Architectural Alliance, Inc. and the lead architect for the district’s bond projects, have each assured the NISD Board of Trustees the major work can be finished by the end of the summer.

Michael Laird, NISD assistant superintendent for personnel and auxiliary services, said he knows the faculty, staff and students will be ready to see what their school looks like as a finished product. They’ve been playing musical portables all year as work came in phases to strategically update the campus built in the 1970s.

“Nederland High School is actually our ‘newest’ school. Let that sink in,” Laird said, laughing. “None of our campuses were designed with security or efficiency in mind, and the high school is no exception. When the building was originally designed, it was all open concept. None of those classrooms had doors, anyone could just walk into the school past the attendance clerk, and there weren’t any exits in the back.

“All year long, Ronnie Jones and H.B. Neild & Sons have been installing the new efficiency and security upgrades we’ve made to all our other campuses in previous phases of bond construction. But the high school also needed renovations in multiple departments, so they’ve been doing one at a time throughout the year. We’ve completed the math, business and language arts wings already. But there’s still more work to be done.”

The City of Nederland is facing a similar time crunch with a portion of its $1.4 million 2015 Hot Mix Asphalt Street Overlay project, which includes shoulders in front of Nederland High School on 18th Street and the installation of a glass grid beneath the new asphalt to extend the life of the road.

Nederland City Manager Chris Duque said the city has prioritized two asphalt projects — 18th Street from Canal to Spurlock and North 12th Street from Elgin to Helena — in order to finish the work in front of the high school and Langham Elementary School before the new school year starts.

Laird said the district has been coordinating with the city so that the street work does not interfere with the school construction.

The main project for the campus this summer will be renovating the home economics area into a new culinary arts lab — something the district hadn’t considered until the work in the elementary and middle schools repeatedly came in under budget.

“The culinary arts lab wasn’t included in the original scope of work. But we’ve saved so much at the elementary and middle schools we can afford this $589,000 addition and incorporate it into the existing bond,” Laird said. “That takes a team of people to do that, chiefly our construction-manager-at-risk H.B. Neild & Sons and our architect, Ronnie Jones. So many people have problems doing construction projects because when you’re updating older buildings like we are, you’re always going to run into problems you couldn’t have seen ahead of time.

“The high school project is going to be our largest. But,” Laird added, knocking on his desk in the NISD Administration Building, “it’s been going very well so far. We were fortunate when the bond passed, because it was a great economy to sell our bonds. We’ve been able to make this curriculum improvement now. It would have been very expensive, and who knows how long to take us, to do a $589,000 addition on our own.”

Laird said the culinary arts lab will create a new career and technical program at the high school — one that shifts the focus of the old home economics level to a “more commercial level.”

“It’s such an improvement over the program we had before,” he said. “The older focus taught kids skills like home-level sewing and food preparation, things of that nature. This will bring our students to a new level, setting them up to graduate and move onto culinary institutions. It opens up a new career path for our students to explore.” 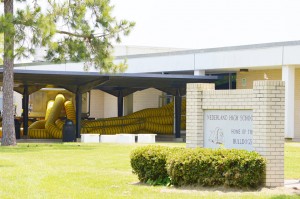 Laird said the trickiest project for the high school this summer will be replacing all the air conditioning equipment throughout the main building.

“To do the main chiller work, we have to completely shut everything off to control the humidity in the campus,” he said. “In enclosed buildings like this, you can create an environment ready to grow mold — and with our wood gym floor is a special concern. The humidity can make those floors buckle, and those are very expensive to replace. But because we’ve gotten so much pre-work done during this school year, it’ll probably only take them two weeks or so to complete that and get everything turned back on.”

Cindy Laird, NISD director of instructional technology, said the summer work at the high school will kick start the final phase of technology upgrades for the entire district. When students return in August, she said, the campus will be equipped with wireless Internet access points “placed for complete classroom coverage,” enabling every teacher to support the district’s “Bring Your Own Device” instruction.

“Most high school students have smartphones and other mobile devices, so we decided it’s where our demand is the highest for these wireless upgrades,” Cindy Laird said. “Right now we have broad campus coverage, but at the end of this project, we’ll have classroom-to-classroom coverage.

“We’re starting at the high school this summer, and then we’ll move onto the middle schools and the elementary schools. It should take a year to a year and a half to get all the schools finished.”

Melissa Wong, NISD business manager, said the summer work at the high school will use nearly all of the remaining funds left in the 2012 bond package — a total of $28,590,000 through two propositions.

“We’ve moved through the Proposition 1 money fairly quickly, because that covered issues we wanted to take care of first,” Wong said. “Proposition 1 money — $7,325,000 — actually came through a federal program, because we qualified for a Qualified School Construction Bond. That money could only be used for certain things, primarily security and efficiency upgrades. Now this money is not a grant — we will have to pay it back — but the QSCB program is such an opportunity because it limits your interest rate between 0 and 2 percent.

“Proposition 2, because it wasn’t federally regulated, did not come with any sort of stipulations. Most of our bond projects are being funded through Prop 2, which our voters approved for $21,265,000. We just sold the last of that bond package, $6,080,000, in May. We’ve been issuing the bonds over time (once a year since 2012) based on what projects we would do next. We have so few projects left to finish at our elementary and middle schools, a majority of this last $6 million will be spent at the high school this summer.”