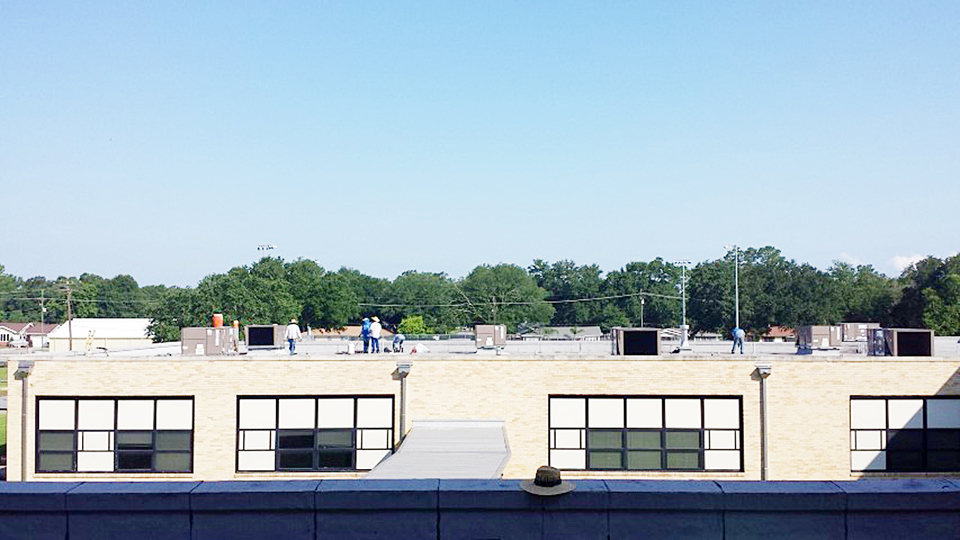 Workers install rooftop air conditioning units as part of the Nederland Independent School District's 2012 bond package at Central Middle School in Nederland during the summer of 2014.

NEDERLAND — With renovations at Nederland High School revving up this summer, the Nederland Independent School District is celebrating the “completed checklist” for its 2012 bond package.

Construction-manager-at-risk H.B. Neild & Sons, Inc. and the bond’s lead architect, Architectural Alliance, Inc. president Ronnie Jones, broke the work listed in the total bond package — $28,590,000 between two propositions — into phases. The Beaumont-based companies started with the elementary schools before moving onto the middle schools and the Alternative Education Campus.

Michael Laird, NISD assistant superintendent for personnel and auxiliary services, said minor projects — like the last leg of technology upgrades — are all that remain for the district’s elementary and middle schools. As soon as the high school renovations “wrap up” in August, he said, the district will go through its final punch list for each campus.

“Most of our campuses were designed in the 1950s and ’60s when everything was open and people could just walk on through,” Laird said. “Security upgrades — classroom locks, new exits and fire alarms, and a visitor access control at each campus — was our first priority.”

Cindy Laird, NISD director of instructional technology, said the 2012 bond allowed the district to install several safety mechanisms that can be controlled remotely and record information for future use, if needed.

“Our new access control is an ID badging system that we can actually customize for each of our employees,” she said. “We can give them access only to the campus they work in, we can control the hours in which the badge will allow them into a certain building — our coaches, for instance, will need extended access for nights and weekends, but we don’t have to give all of our employees that same access — and in the summer, we can disarm badges for employees who won’t be on campus.

“The access control gives us many advantages over our old, basically nonexistent system. It’s much easier to deactivate a lost badge than to re-key an entire school and make new keys for each employee. A new badge is about $5 versus hundreds just to re-key every door. We have remote access, so if there’s a situation at one of the schools, we can immediately lock down all the doors from here — as can the campus attendance clerk can lock down the whole building with a button (under the main desk).”

Laird said the second biggest security upgrade was a major overhaul to what the district had before the bond work began.

Prior to the bond, the district had security cameras in two campuses, she said, and one of those systems was on its last leg. Each campus now has security cameras — including some infrared to record in the dark — “strategically placed in entrances, exits, hallways and in high-traffic areas, like gymnasiums, cafeterias and auditoriums.” 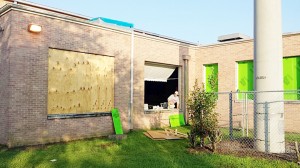 A worker prepares C.O. Wilson Middle School for energy-efficient window replacements, as part of the Nederland Independent School District’s 2012 bond package, during the summer of 2014.

Michael Laird said the next priority for the elementary and middle schools was efficiency — window replacements, new lighting and HVAC (heating, ventilation and air conditioning) upgrades.

“All of the campuses, except the high school, had window air conditioning units — usually two in each classroom — and that’s the most inefficient form of air conditioning there is,” he said, laughing. “With the rooftop units we have now, the air quality is so much better in our schools, with less pollen and less irritants to the kids and the staff.

“We installed energy-efficient lighting in all the campuses, and even though they don’t use as much energy, they produce even more lighting. When you walk into our middle schools and our elementary schools now, you can immediately tell the difference with the lighting and the air quality. It’s such an improvement, and we’ve already seen financial gains from making those changes, (like a rebate check from Entergy, based on the amount of energy the elementary schools were expected to save during the 2014-15 school year).”

Laird said the completed work at the elementary and middle schools, as well as the ongoing work at Nederland High School, will move the district closer to its ultimate goal — “that our schools will be the most modern, with the most up-to-date security, as possible for the amount of money we’ve spent.”

For more information about the completed work at the elementary and middle schools, visit the NISD 2012 Bond website.