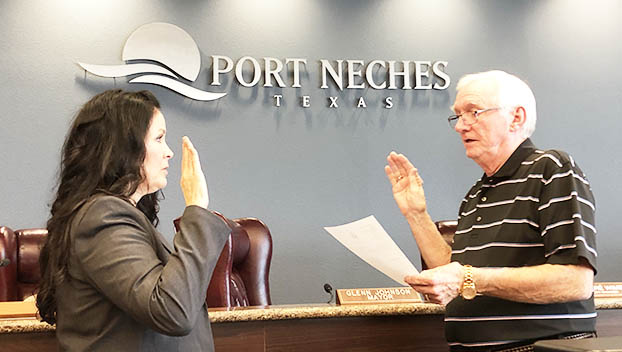 Cheri Griffith, the new police chief for the City of Port Neches, is sworn in by Mayor Glenn Johnson. (Monique Batson/The News)

PORT NECHES — Southeast Texas history was made Thursday afternoon as Cheri Griffith, the new police chief for the City of Port Neches, was sworn in at the monthly city council meeting.

“First of all I have to say how proud I am of Cherie, the first lady police chief in Southeast Texas,” said Mayor Glenn Johnson. “And we’ve got a good one — a very good one. It’s an honor to swear you in.”

Griffith took her oath of office before family, friends and other attendees. Afterward, Johnson gave her the opportunity to speak.

“I’ll say what Chief (Paul) Lemoine has been saying; I’m all speeched out,” she said as the room laughed with her.

But that didn’t stop the appreciation.

Griffith, who joined the department in 2011, was a detective with PNPD when longtime Chief Lemoine announced his plans to retire earlier this year.

Also the city’s first female police officer, Griffith was the lone applicant for the chief’s position.

“This is my purpose,” she recently told Port Arthur Newsmedia. “I spent a lot of time in prayer. I felt God kept opening these doors. I feel like I’m where I’m supposed to be.”