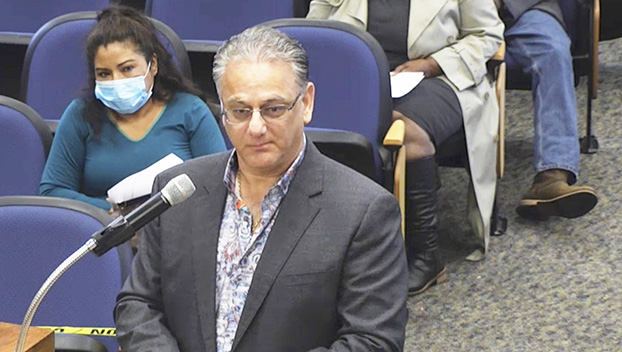 While cans filled with trash sat outside their homes, a majority of the Port Arthur City Council aired their grievances Tuesday morning regarding the lack of trash pickup inside the city.

“In the last 3-4 weeks, the problem has gotten progressively worse,” said Mayor Pro Tem Donald Frank. “Citizens are up in arms, and we’re getting a brunt of this on a daily basis. When I left this morning to come to the meeting — I’m on the Thursday schedule. My garbage can was still out there full of garbage. My neighbor’s garbage cans were overflowing.”

With a growing amount of calls from residents regarding trash pickup being a week or more behind, Councilwoman Ingrid Holmes and Councilman Cal Jones requested an explanation from city staff in Tuesday’s scheduled council meeting.

Dr. Tohme Hani gave a presentation and said two things are driving the problem: the pandemic and a lack of parts.

“Saturday we had five trucks that were running out of the 12,” Hani said.

In his presentation, the city employee said the Public Works Department is working seven days a week to get back on the normal schedule. However, the inability to get parts for trucks that are not in operation, as well as some employees coming down with COVID, impacted the number of trucks that can run each week.

“We do have challenges in certain neighborhoods where garbage was not picked up for two weeks,” Hani told council.

One truck is back in service today, one should return within the next two days, and two are expected by the end of the week, he added.

But even though most councilmembers thanked the department’s employees for working seven days a week without a break, most found the explanation for the lack of service unacceptable.

“I’ve got a wealth of respect for you,” Jones told Hani. “But at the point you started talking, I was about to tell you to save that because I’ve heard enough of that in the past. We’ve had garbage problems since Harvey. We bought more trucks, and we’re still struggling with trash and garbage.”

Jones said he doesn’t blame the city, but instead himself.

Jones and Councilman Thomas Kinlaw suggested the department look at hiring more employees to handle the load, as well as preparing for the future.

The District 3 councilman said the issues reported Tuesday have been the same used in the past, and therefore the city should be preparing for them instead of waiting on them.

“Why aren’t we getting prepared for the bad times?” he asked. “Why don’t we think about the future and surviving? It’s our job to take care of Port Arthur. Why do the trucks keep breaking down? Let’s get ahead of the game and buy the parts.”

Kinlaw said he did not vote in favor of the rate increase last year because he didn’t feel services were operating well enough to validate such a move.

“Every meeting we keep beating a dead horse,” Jones said. “COVID, broken trucks, can’t find trucks — it’s old. All this stuff is old. In my opinion 2022 won’t go like 2021. Everybody can make excuses. And your presentation sounds good. But next week we’ll be back to the same problems. My garbage has been out since last Tuesday.”

Hani said when it comes to COVID, it doesn’t only take one employee out of commission, but anyone that has been around them.

Councilwoman Charlotte Moses sympathized with that, and those employees who have been working without days off to help fill in the gaps.

“I talked to a city employee that had been working 17 straight days driving,” she said. “These are human beings, and I want to say to those employees…that we can see where they are really trying everything they can. These employees have worked hard and not been at home. We have to be mindful that these are human beings driving these trucks, they aren’t machines.”

“Everybody’s sick of COVID, but it is a reality and that’s the thing we have to understand,” she said. “The word COVID makes me sick, but it’s a reality every single day. We’re sitting here with masks on because it is a reality. And if you don’t think it is, take off your mask.”

Mayor Thurman Bartie, who put his trash out last Tuesday and had it picked up this Monday, thanked the council for their words before naming a multitude of departments on city staff.

“In six months, if we have not resolved this…then we’re going to have what I like to call a Come to Jesus. As some point, something has to happen.”

Click here to see staff’s presentation to the council.