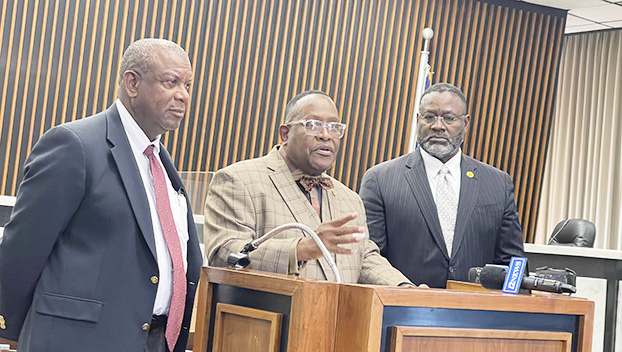 Three Port Arthur city officials stood in accord Tuesday afternoon to assure residents there is a plan to get trash pickup back on schedule and it will not result in an increase of taxes.

Mayor Thurman Bartie, Mayor Pro Tem Donald Frank and City Manager Ron Burton addressed media during a news conference to explain the plan that is expected to fix a lack in trash pickup that has escalated since December.

“We’ve experienced a high, high instance of being totally off of schedule because of the pickup of garbage in our city,” Bartie said. “It wasn’t because these individuals were just running amuck and not being given directives. Mitigating circumstances being as such as inoperable equipment because of our inability to get parts so that the equipment would function properly, also attendance of employees.

“With COVID, which no one really likes to speak on, employees are being infected and some of these are essential employees — the drivers of the trucks.”

The Public Works Department has two employees that operate garbage trucks currently out with COVID. And, Burton said, each truck is staffed with two people. So not only does the infected one have to quarantine for 14 days, but any employee they’ve been near must as well.

In order to help get back to a normal schedule, the city will be moving to a six-day pickup schedule. They are also “aggressively pursing the repairs of our fleet of vehicles that we have for garbage collection,” Bartie said.

City staff has secured a lease for one garbage truck through Premier Rentals and a contract with Republic Services to provide two garbage trucks. The latter, officials hope, will turn into a six-month contract.

And next month, bids will go out to bring in a heavy trash truck as needed with less than 24-hours notice.

Burton said any trucks brought from outside of the city will also come with staff to avoid adding additional work time to current employees, some of which who have worked two or more weeks without a day off.

These implementations will be monitored closely over the coming months.

Burton said they have restructured the equipment services department to help manage the volume of trash in need of collection.

The city manager said when it came to funds needed for parts, overtime, outsourcing, and other requirements to get the garbage pickup back on schedule; the city has access to COVID-related grants that will be utilized to pay for any increase in costs.

“We will continue to make every effort — every effort — to implement the plan to make sure that we utilize the sources that we have,” he said. “It’s not a problem of money. It’s not (that) we’re trying to save on anything. We understand that if the trash collection remains an issue, it’s going to become a health problem. And that we’re doing everything to avoid.”

Frank expressed his confidence in the plan.

“We will be successful,” he said, explaining the only reason other council members were not present was because it involved public meeting rules involving the number of councilmembers that can gather at one time. “But please know every councilmember along with the mayor and the city manager and the entire staff of the City of Port Arthur is dedicated to getting this problem solved.”

The Public Works Department said it would likely take a bit of time before trash pickup resumes its regular schedule. Residents are advised to put their trash bins out on the expected days and to make them accessible until they are emptied. Toaters should be brought away from the street at night as well as once they are emptied.