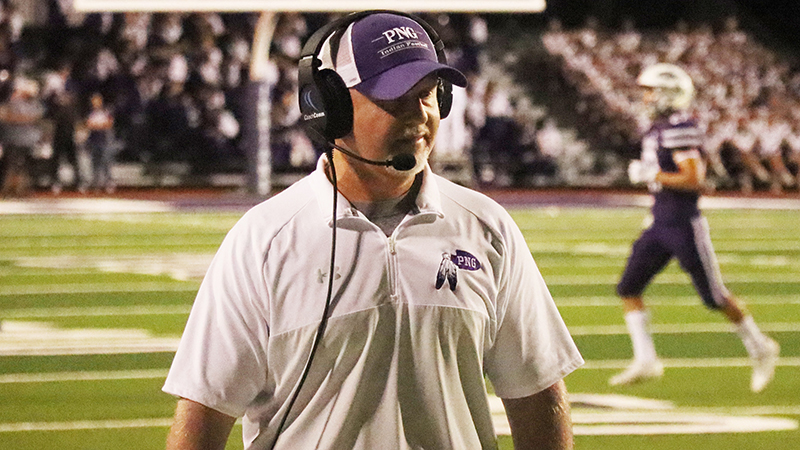 PNG recorded their first district victory of the season with a win over Dayton. (Chris Moore/The News)

DAYTON – The Port Neches-Groves Indians held on for a wild 42-35 win over the host Dayton Broncos in a wildly entertaining game at Bronco Stadium on Friday evening.

The Indians (3-2 overall, 1-1 district) put on an aerial display in the first half before the ground game took control in the second half.

All four PNG touchdowns in the first half were through the air, while both second half TDs were 3-yard runs by Koby Trahan.

The Indians struck first, taking a 7-0 lead on the game’s first possession as Crippen threw a 10-yard scoring pass to Landon Guarnere to cap a drive that ate more than five minutes off the clock.

Dayton appeared to have stopped PNG earlier in the drive as Tate Sandell’s 34-yard field-goal attempt clanged off the left upright, but the Broncos were called for roughing the kicker, giving the Indians a second chance they quickly took advantage of.

The Indians responded just 49 seconds later with some long-ball magic of their own as Crippen hit Cooper Faircloith with a 57-yard scoring aerial to make it 14-7 PNG at the end of one quarter.

Dayton tied it at 14 early in the second quarter on an 8-yad TD pass from Denton to Ashton Garner.

The Indians responded with two more TD passes from Crippen, an 8-yard toss to Chance Prosperie and a 16-yard connection with Guarnere to lead 28-14 with 1:36 remaining to lead 28-14.

The host Broncos didn’t attempt to run out the clock, instead swiftly marching down the field, cutting the PNG lead to 28-21 with just eight seconds remaining in the half when Denton found Garner for a 30-yard TD pass.

Trahan made it 35-21 with his first TD with just 28 seconds left in the third quarter.

Dayton’s Daveon Washington made it 35-28 with a 12-yad scoring scamper with 9:57 remaining in the fourth quarter.

Trahan found the end zone again with 4:45 remaining to make it 42-28, but Dayton needed just 90 seconds to cut the PNG lead back to seven points when Garner caught his third TD pass of the evening from Denton, this one a 39-yard connection to make it 42-35.

PNG couldn’t score on the ensuing possession, giving Dayton one last chance to tie the game.

However, the Broncos couldn’t get anything going, allowing the Indians fans, who greatly outnumbered the host Broncos fans, to celebrate in the stadium and enjoy the trip back home.

PNG quarterback Cole Crippen, who threw for 230 yards and four touchdowns. A second game ball goes to PNG running back Koby Trahan, who finished with 162 rushing yards and two touchdowns.

Play Of The Game Was…

PNG running back Chase Johnson picked up 6 yards on a fake punt on a fourth-and-2 play that kept PNG’s final scoring drive alive.

Another key play was the roughing the kicker penalty assessed against the Broncos after Sandell’s missed FG attempt allowed the Indians to eventually score the game’s first TD.

The Indians return home to entertain the Barbers Hill Eagles at 7:30 p.m. Friday.