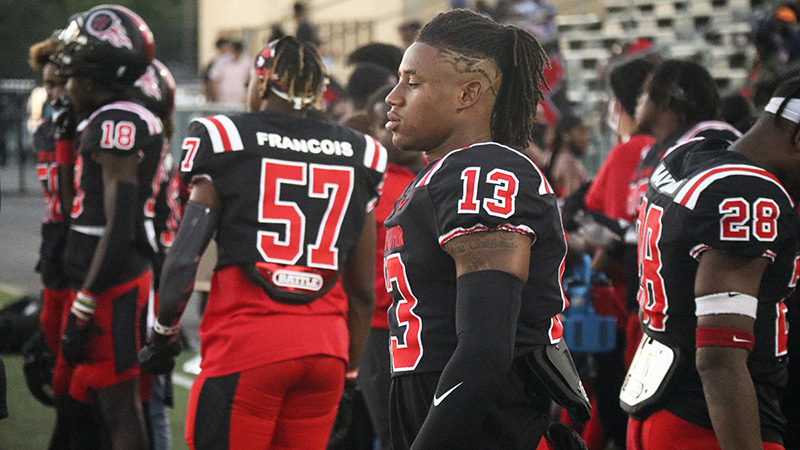 Memorial’s defense posted its second straight shutout, and Jah’mar Sanders did what he does in leading the offense as the Titans cruised to a 33-0 win over Goose Creek Memorial Friday night in District 9-5A Division I action at Stallworth Stadium.

Memorial (4-1, 2-0) held the Patriots to just 94 yards of total offense, 79 rushing and 15 passing. The Titans also posted two interceptions, including a highlight reel, one-handed grab by Jayce Robertson in the third quarter.

“Our kids played really hard and were physical in all three phases,” Memorial coach Brian Morgan said. “We didn’t play great, at least not by our standards, but it was a good win. We just have to keep improving.”

“It makes it a lot easier for the offense,” said Morgan when the defense blanks the opponent. “The guys are playing really hard. They’re practicing hard, playing hard and getting great results. We’re playing good, team football, scoring points and stopping people.”

Sanders turned in another complete game for the Titans. He completed 9-of-19 passes for 183 yards and a touchdown. He rushed 13 times for 99 yards and three touchdowns.

“I can’t say enough about his character and how he is in the classroom,” Morgan said. “That side of things other than just his football talent. He’s a legit track guy that plays football with track speed. When he wants to and needs that burst, he has it.”

Leading 20-0 at halftime, Memorial’s defense stopped the Patriots’ opening drive of the third quarter. The Titans didn’t waste any time in increasing their lead on their opening possession of the second half. Consecutive runs of 19 and 10 yards by Ja’qualilon Chaney got the drive off to a good start.

Sanders hit Ilijah Williams for a 27-yard completion to the Patriots 9. Sanders scored three plays later on a 5-yard run to push the lead to 27-0 with 8:01 remaining in the third quarter.

After forcing another three-and-out by GCM, Memorial struck again on a quick five-play drive. This time it was Adrian Hayward on a 10-yard touchdown run to make the score 33-0.

“We had to make some adjustments from the game plan. They (GC Memorial) came out a little bit different then they had been showing on film,” Morgan said on what unlocked the running game. “Our guys up front played really physical and all of the backs ran really well.”

After getting stymied on downs on its first possession, Memorial scored the game’s first points on its next drive. Sanders hit Ilijah Williams for a 17-yard completion on third-and-16 to keep the drive alive.

Sanders followed with a 17-yard run.

Sanders hit Adrian Hayward for a 29-yard completion to the GCM 15. Sanders called his own number for a 15-yard touchdown run to give the Titans a quick 7-0 lead with 4:39 remaining in the first quarter.

After forcing a quick three-and-out by the Patriots, Memorial put together another lengthy scoring drive. Hayward ran for 19 yards on third-and-18 to give the Titans a new set of downs.

He followed with a 22-yard run to the GCM 22. On fourth-and-six, Sanders hit Williams for an 18-yard scoring strike. The extra point was blocked to give Memorial a 13-0 lead with :39 left in the opening quarter.

GCM’s (1-4, 0-2) Isaiah Thomas had a nice kickoff return to give the Patriots good field position at its 42. Thomas followed with a 45-yard run to the Memorial 13. The drive stalled and the Patriots 33-yard field goal attempt was no good.

The Titans needed only three plays to score again on their ensuing possession. Following a 5-yard run by Hayward, Sanders connected with Kelby Blanchette on a 63-yard completion to the GCM 12.

Sanders scored on a quarterback draw for a 12-yard touchdown to extend Memorials lead to 20-0 with 9:29 left in the second quarter.

Jah’mar Sanders completed 9 of 19 passes for 183 yards and one TD and rushed for 99 yards on 13 carries and three TDs.

Memorial rushed for 333 yards and passed for 183 for 416 yards of total offense.

Marcus Hayes rushed 9 times for 90 yards. Adrian Hayward had six carries for 64 yards and one TD and caught three passes for 48 yards.

GCM was led by Isaiah Thomas who had 79 yards rushing on 14 carries. Mason Duke was 2 of 10 for 15 yards and two interceptions.

The Play Of The Game…

There were plenty of plays to choose from on offense, Sanders’ 18-yard TD toss to Ilijah Williams on fourth-and-six or Sanders’ 15-yard TD run for the game’s first score, but the play of the game was running down Patriots running back Isaiah Thomas at the 13 yard line.

The defense then sacked quarterback Mason Duke to force a 33-yard field goal that was missed in the second quarter, which preserved Memorial’s second straight shutout.

GM Memorial is the visiting team next Friday against cross town rival Baytown Lee at 7 p.m.