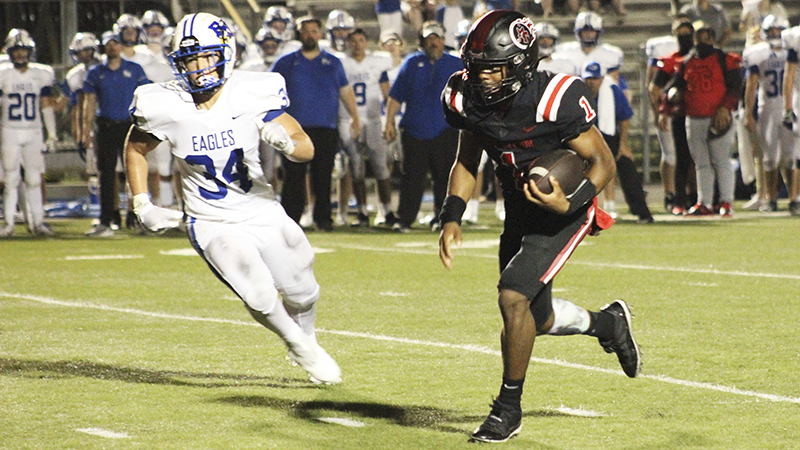 Memorial quarterback Jah'mar Sanders runs the ball during the second half of the Titans' 56-28 win over Barbers Hill. (Jackie Batson/Special to The News)

Jah’mar Sanders was too much for Barbers Hill as the senior accounted for big plays with his arm and legs in leading Memorial to a 56-28 win over the Eagles in non-district football action Friday night at Memorial Stadium.

Kelby Blanchette and Ilijah Williams both had over 100 yards receiving.

The Titans were able to hurt the Barbers Hill defense with big plays. They had touchdown passes of 95, 64 and 54 yards, and a touchdown run of 83 yards.

“They (Barbers Hill) are a good football team, and it took us playing well all four quarters tonight to get the win,” said Memorial coach Brian Morgan. “I was really proud of how the kids kept battling. The offense, defense and special teams were all feeding off each other and that’s what it takes.

“He’s a special player,” said Morgan when asked about the play of his quarterback. “He told me he wanted the ball in his hands at the end of the game and you saw what happened. What most people don’t realize is that he has a very high football IQ to go along with his special athletic ability.”

With the game tied late in the fourth quarter, Sanders connected with Ilijah Williams on a 95-yard completion that put the Titans up for good at 35-28. Williams caught the pass around midfield, made a tackler miss and raced to the end zone for the score.

That possession was set up by a fumble recovery by Jhalan Augustin. Barbers Hill was driving to take the lead when Doug Garry coughed up the ball at the Memorial 9. A holding penalty put the ball back at the 5, which set up Sanders’ completion to Williams with 5:20 left in the game.

Devuan Davenport intercepted Brent Holdren on the Eagles’ ensuing possession. Two plays later, Sanders raced down the left sideline for an 83-yard TD run to push the lead to 42-35.

The Titans defense iced the game away. Darrell Thornton intercepted a tipped Holdren pass and returned in 30 yards for a touchdown and Christian Thomas closed out the scoring with a 60-yard fumble return for a touchdown to provide the final margin of 56-28.

Memorial received the kickoff to start the second half. The Eagles defense forced a quick three and out. BH went right to work on an eight-play scoring drive to tie the game. Holdren ripped off a 41-yard run to put the ball in Titans territory.

Holdren hit Garret Hagler for a 12-yard completion to the 5. Hagler scored on the next play to tie the game at 28-28 with 8:05 left in the third quarter.

The Titans started the scoring mid-way through the first quarter on their second possession. Facing a third and 10, Sanders hit Blanchette on a 54-yard scoring strike to put Memorial up 7-0 with 6:34 left in the first quarter.

BH finally got on the board late in the quarter. On fourth-and-one, Doug Garry busted up the middle for a 35-yard scoring run. The Eagles completed a pass for the two-point conversion to make the score 8-7 with :16 left in the opening stanza.

The Eagles fumbled the ensuing kickoff, which was recovered by the Titans at the BH 28. Two plays later, Sanders hit Adrian Hayward on a screen pass that went for 22 yards and a touchdown. That extended Memorial’s lead to 21-8 with 6:46 remaining in the quarter.

BH responded on its next possession with a six-play scoring drive, which was aided by a pass interference penalty on the Titans. Hayden Pfitzner took the hand off on an end around and weaved his way through some traffic en route to a 12-yard TD run. The 2-point conversion run failed to make the score Memorial 21, BH 14 at 4:49.

BH looked content to run out the clock and head to halftime. But consecutive runs of 7 and 3 yards by Garret Hagler changed the plans. Holdren hit Cole Thompson for what looked to be a 64-yard touchdown. However, Thompson was called for taunting at the 3, which negated the score.

With the game tied in the fourth quarter, Jah’mar Sanders connected with Ilijah Williams on a 95-yard touchdown to give the Titans the lead at 35-28 with 5:20 remaining in the game.

Memorial’s Kelby Blanchette had four receptions for 195 yards and two TDs and Ilijah Williams had 156 yards receiving on three catches. BH quarterback Brent Holdren was 9 of 23 for 140 yards passing and rushed the ball nine times for 74 yards. Garret Holdren led all rushers with 178 yards on 27 carries. Memorial amassed 663 yards of total offense.