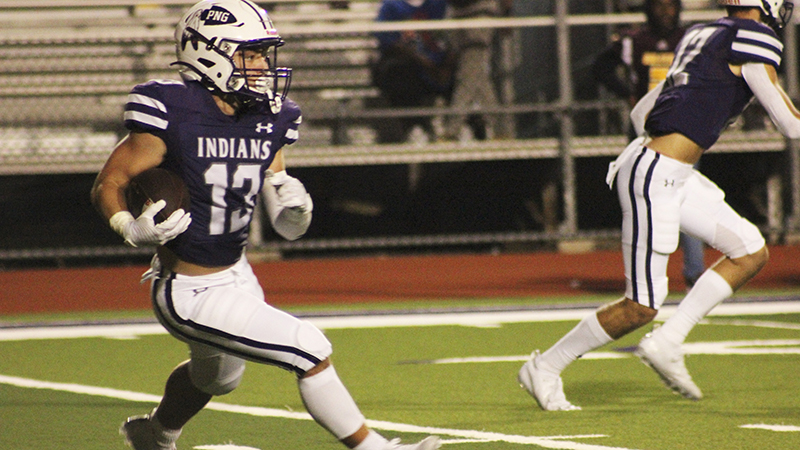 PORT NECHES — Daylon Bergeron’s spectacular one-handed touchdown catch in the fourth quarter proved to be the game winner as the Port Neches-Groves Indians held on for a 21-17 victory over the visiting Beaumont United Timberwolves at The Reservation on Friday night.

Bergeron juggled the pass from quarterback Cole Crippen before finally grabbing possession as he tumbled into the end zone for a 24-yard score to put the Indians up 21-10 with 10:27 remaining in the fourth quarter.

The Indians had their hands full with the Timberwolves throughout the night and didn’t really seal the win until forcing a Beaumont United turnover in PNG territory with less than three minutes on the clock.

Koby Trahan led the PNG offense with 192 rushing yards and two touchdowns on 33 carries. Trahan had eclipsed the 200-yard plateau before losing 15 yards on his last carry when the Indians were attempting to run out the clock.

Crippen was 10-of-19 through the air for 96 yards with one touchdown and one interception.

Beaumont United’s Sir Zollocofer, who took over at quarterback after the Timberwolves’ first possession, threw for 121 yards and one TD. He also had five carries for 36 yards.

After a scoreless first quarter, the visiting Timberwolves opened the scoring midway though the second quarter when quarterback Sir Zollocofer raced in from 12 yards out with 6:48 remaining in the period. Edy Martinez added the PAT to put Beaumont United up 7-0.

PNG quickly responded, tying the game on the ensuing possession. Koby Trahan capped the drive with a 29-yard run. Tate Sandell’s PAT tied the game at 7 with 3:40 left on the clock.

Bergeron’s grab gave the Indians what seemed to be a comfortable 21-10 lead, but Beaumont United made things interesting when Zollocofer hit a wide-open Jaylon Moore for a 16-yard TD to make it 21-17 with 8:28 remaining. That’s when the Indians’ defense rose to the occasion to push PNG to 2-0 on the season.

Koby Trahan for his 192 yards rushing with two TDs.

Daylon Bergeron’s highlight-reel TD reception that proved to be the winning score.

PNG plays its first road game of the season as it heads to Tomball to meet the Cougars at 7:30 p.m. Friday. Beaumont United remains on the road to take on the Montgomery Bears at 7:30 p.m. Thursday.