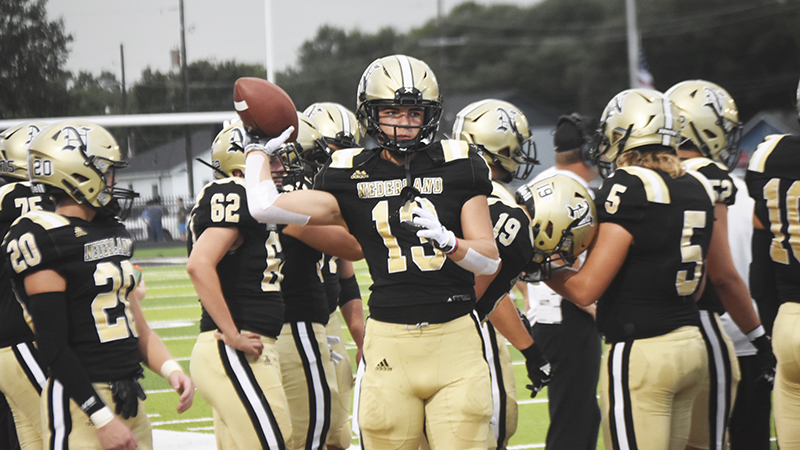 Noah Kendrick warms up prior to the Bulldogs win over WOS. Kendrick threw a touchdown pass on a trick play. Monique Batson/The News

NEDERLAND – Senior Kyndon Fuselier put on a show in the opening game of the season as Nederland was leading West Orange-Stark 14-6 with 1:27 left in the third quarter when the game was called due to lightning in non-district action Friday night at Bulldog Stadium.

Fuselier was noticeable on both sides of the ball for the Bulldogs. He caught fives passes for 137 yards and two touchdowns. He also added an interception on defense.

Nederland’s defense was able to keep the Mustangs offense in check for much of the game. West Orange-Stark’s only points came on a 96-yard kickoff return to open the game. Otherwise, the Mustangs were held to 12 yards passing and 118 yards rushing for a total of 130 yards of offense.

“I told the kids in the locker room after the game that they showed us what we can’t see in practice, and that’s how much heart and determination they have,” said Nederland coach Monte Barrow. “They could have gotten down on themselves after giving up that touchdown on the kickoff to start the game, but instead they stepped up and showed what they are made of.”

Nederland took the second half kickoff and drove down the field for its first score of the game. Luke Broussard hit Kyndon Fuselier for 22 yards to the Mustangs 40. A completion to Noah Kendrick for 7-yards and a 5-yard run by Mason Beresford put the ball at the WO-S 28.

Fuselier took a quick out pass, made one would-be tackler miss and raced to the end zone for a 28-yard touchdown. Carter Peletier’s extra point put the Bulldogs up 7-6 with 8:43 left in the third quarter.

WO-S had the makings of a good drive on its ensuing possession. Facing a third-and-nine from the Nederland 48, Fuselier stepped in front of a Mustangs receiver for an interception for the Bulldogs.

Despite this being the first game of the season, Nederland dipped deep into the playbook on the next play from scrimmage. Broussard threw a pass to Noah Kendrick behind the line of scrimmage. Kendrick then heaved a pass down field to Fuselier who out-sprinted the Mustangs defenders for a 55-yard touchdown to extend Nederland’s lead to 14-6 with 5:45 left in the third quarter.

After forcing another Mustangs punt, Nederland’s offense went back to work and had another drive going when the first lightning strike lit up the sky. Soon after rain was coming down in sheets as the bleachers scattered and the teams returned to the locker rooms. After waiting more than 30 minutes, lightning continued to flash in the sky and the game was called.

The season started off with a great play for West Orange-Stark. The Mustangs won the toss and elected to receive. That proved to be a pretty good decision. Dakarion Judge proceeded to return the opening kickoff 96 yards for a touchdown.

He broke a tackle at about the 20-yard line and went virtually untouched the rest of the way. WO-S decided to go for a two-point conversion, but the rush attempt failed to make the score 6-0 with 11:47 left in the first quarter.

The two defenses took over for the rest of the first half as neither offense was able to advance the ball inside the other team’s 30-yard line.

Broussard’s first carry of the game for the Bulldogs went for 18 yards. But that drive ended with Broussard was sacked for an 11-yard loss, forcing a punt.

Fuselier returned a punt 44 yards to the Bulldogs 49 to start Nederland’s next possession. However, a rush for zero yards and two incompletions from Broussard forced another punt.

Nederland’s third drive of the game advanced to the Mustangs 36. Broussard hit Fuselier for 21 yards to put the ball in WO-S territory. The drive stalled at the 36 and Carter Peletier’s 53-yard field goal attempt wide right and a little short.

Nederland senior Kyndon Fuselier, who caught five passes for 137 yards and two TDs. He also had an interception.

The play of the game was two-pronged. Kyndon Fuselier intercepted a Landon Heath pass to give the Bulldogs the ball at their own 45. On the ensuing play, Fuselier caught a 55-yard TD pass from Noah Kendrick, who received a pass from Luke Broussard behind the line of scrimmage to start the play.

Luke Broussard completed 6 of 12 passes for 89 yards and he rushed the ball seven times for eight yards. Mason Beresford carried the ball nine times for 40 yards. Elijah Gales led the Mustangs with 55 yards on six carries. Jamaal Shaw added 50 yards on six totes. Landon Heath completed 4 of 10 passes for 12 yards with one interception.

Nederland hits the road for a non-district game at Houston Austin. The game will be played at Barnett Stadium with a 7 p.m. kickoff.  West-Orange Stark returns home to host Little Cypress-Mauriceville Friday at 7:30 p.m.