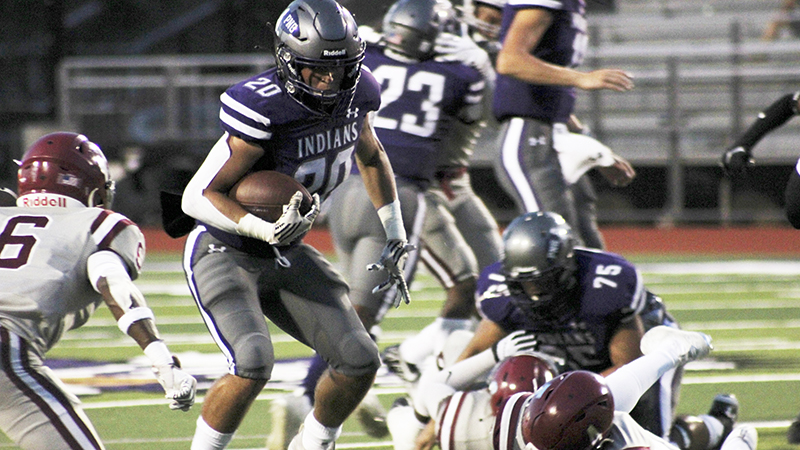 Koby Trahan runs the ball during PNG's win over Jasper. Jackie Batson/Special to The News

Mother Nature claimed victory on the opening night of the 2021 football season at Port Neches-Groves on Friday, as the contest between the Jasper Bulldogs and host Indians was called with 7:31 remaining in the third quarter because of lightning.

The Indians were leading the Bulldogs 14-7 when the officials halted the proceedings as several bolts of lightning pierced the darkened sky above the stadium.

The contest was a non-district game; therefore, the game will not be rescheduled, and the result will stand.

Port Neches-Groves dominated the first half, building a 14-0 lead at intermission. Jasper scored on its first possession of the second half to cut the lead to 14-7 before the game ended prematurely. 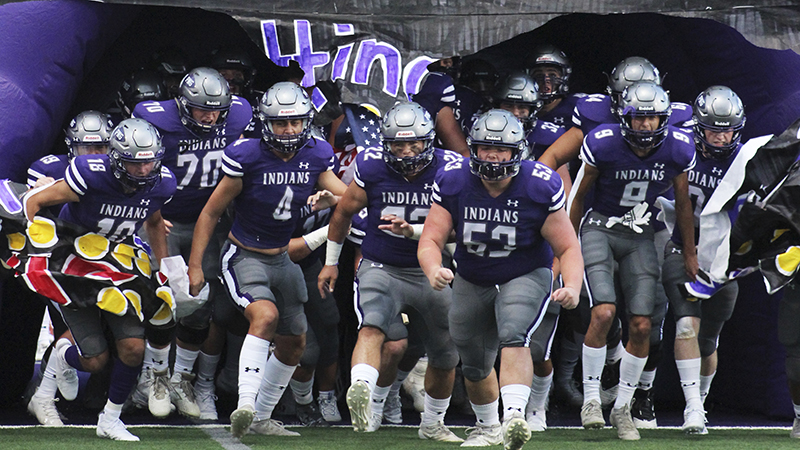 PNG players run onto the field prior to their win over Jasper at home Friday. (Jackie Batson/The News)

The Indians took an early 7-0 lead as Koby Trahan capped PNG’s first possession of the contest with a 7-yard run with 5:53 left in the opening quarter. Tate Sandell added the PAT.

“This was a hard-fought game,” PNG coach Brandon Faircloth said. “We still have some things to work on, and we’ll do just that. But I saw a lot of good things today. The team worked hard. It’s a good way to start the season.”

PNG made it 14-0 on the first half’s final play as Jasper decided to run one last play on third and long with time winding down. Jasper quarterback Zikeice Simmons fumbled when he was hit, allowing PNG’s Isaac Sinette to scoop the ball off the turf and scamper 41 yards to the end zone with no time left on the clock.

PNG received to start the third quarter, but the Indians also saw their gamble fail as PNG was stopped on fourth and short on its own 49 on a fake punt. Jasper needed just one play to get on the scoreboard as Tyree Adams scored on a 49-yard run to cut the Indians’ lead to 14-7 with 10:32 remaining in the third quarter.

That would be it for the scoring before the game was called after a lengthy delay.

Trahan rushed for 59 yards on 13 carries. Quarterback Cole Crippen, making his first career start for PNG, was 7-of-18 for 84 yards through the air. Landon Guarnere caught three passes for 55 yards.

Adams led Jasper with 131 rushing yards on 19 carries. PNG held the senior running back in check for the most part until his 49-yard scoring dash.

“Our defense did a tremendous job,” Faircloth said. “We tackled well and came up with the big plays when we needed to. A lot of credit goes to Coach (Matthew) Woodard, our defensive coordinator.”

Isaac Sinette, whose 41-yard TD on a fumble return put the exclamation point on a stellar effort by the PNG defense.

Play of the Game…

Sinette’s 41-yard fumble return for a TD as the first half ended to give PNG a 14-0 lead at intermission. Instead of just running out the clock, Jasper gambled and lost big time.

PNG forced Jasper to turn the ball over four times, once on a fumble and three times on downs in eight possessions. For the game, Jasper led in time of possession, holding the ball for 16:04 to PNG’s 11:55. PNG’s opening scoring drive lasted 3:45. That was the only PNG possession that exceeded three minutes.

PNG remains home to host the Beaumont United Timberwolves at 7:30 p.m. Friday at The Reservation. Meanwhile, Jasper plays its second straight road game when it travels to Silsbee for a 7:30 p.m. kickoff Friday.