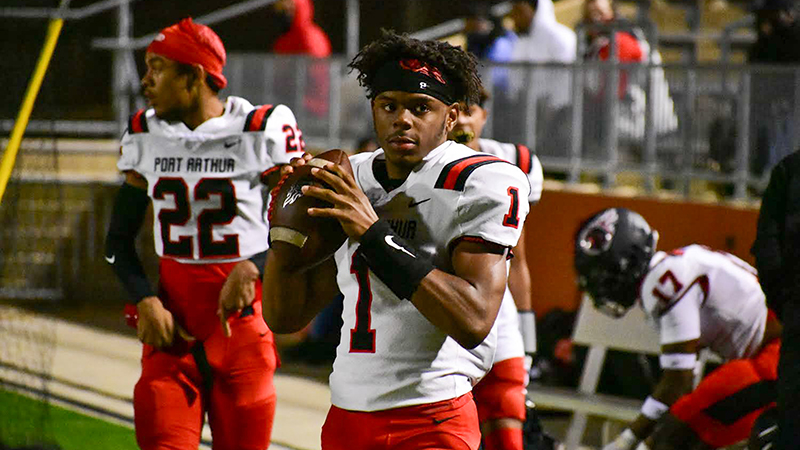 Memorial quarterback Jah'mar Sanders took the district by storm in 2020, earning the district MVP award. Can he do it again this season. (I.C. Murrell/The News file photo)

The Memorial Titans put together an impressive performance as they routed the Lancaster Tigers 27-7 at Prairie View A&M on Friday.

Both teams were ranked in the top 20 of 5A schools heading into the contest.

The Titans wasted little time getting on the board as quarterback Jah’mar Sanders connected with Illijah Williams on a 39-yard touchdown pass on the third play of the game to give Memorial a 7-0 lead.

After both teams exchanged punts, Lancaster moved the ball deep inside Titans territory before Titans safety Devuan Davenport came up with an interception on the 5-yard line.

Five plays later, Sanders found a seem and outran the defense 75 yards to the end zone to give the Titans a 14-0 lead in the first quarter.

The Titans defense was almost impenetrable in the first half, forcing three turnovers and only allowing two first downs.

Defensive tackle Tyrese Wallace sniffed out a screen play and came away with the team’s second interception of the half.

“We practice against them every day,” Memorial Head Coach Brain Morgan said of his defense. “I try to tell people how good they are. It is rough on us in practice. Coach (Korey) Mangum and his staff do a great job. Those guys play unbelievably hard. They run around and strike… Those guys are fun to be around and enjoy playing football.”

The Tigers got on the board in the second half after Lancaster blocked a punt to start their drive on Memorial’s 30. Lancaster running back Isaiah Broadway punched the score in from 1 yard out to bring the score to 14-7 late in the third quarter.

However, Lancaster’s hope of a comeback was short lived after a fumble put the Titans on the Tigers’ 32. Sanders took advantage of the field position and increased the Memorial’s lead to 21-7 off a 25-yard scamper.

After a turnover on downs by the Tigers on the ensuing possession, Sanders made the defense pay one last time on a 30-yard run for the final score with just under six minutes left to play.

Pre-snap penalties plagued the Titans, but Morgan attributed multiple delay-of-game calls on the play clocks in the stadium not functioning.

Jah’mar Sanders torched the Tigers on the ground to the tune of 17 carries for 171 yards and three touchdowns. Sanders was 9-of-15 for 135 yards and one touchdown through the air.

“He is always the best player on the field,” Morgan said. “That was not any different tonight.”

On the Titans’ second score of the game, Sanders proved to be just a bit faster than everyone else on the field. The quarterback weaved through the opposing defense untouched to give the Titans a 14-0 lead.

Memorial will host Barbers Hill Friday at 7 p.m., while Lancaster will travel to Skyline.