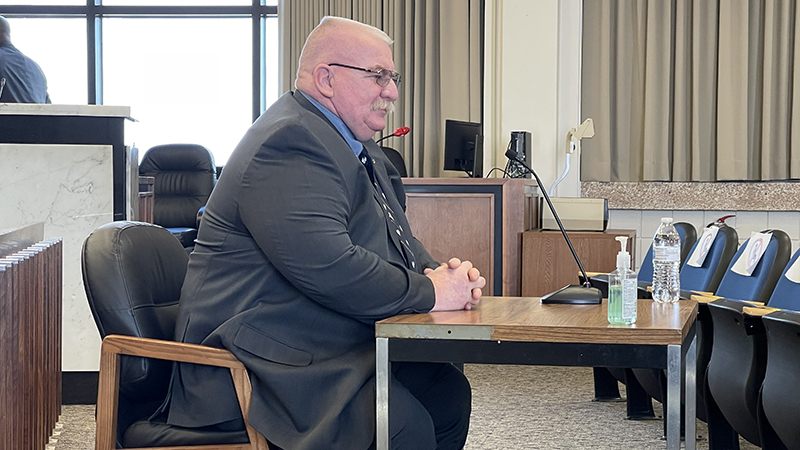 Terry Johnson was the first of three finalists to interview Wednesday morning for the position of Port Arthur Fire Chief following the retirement of longtime chief Larry Richard.

The city announced interviews of four candidates, but John Grasso Jr. withdrew his application prior to today.

Johnson, who spent 10 years in the U.S. Army, currently serves as the Fire Chief, EMS Director and Code Administrator in Junction City, Kansas.

“My first station was Fort Polk, so I’m very familiar with Port Arthur,” he told a panel made of community members.

Johnson was honorably discharged in 1992 and went on to become a volunteer firefighter in North Carolina. He earned an associates degree in Fire Protection Technologies from Wilson Technical Community College; and later a bachelor’s degree in Fire Administration/Fire Science Management from the University of North Carolina.

He served as the first paid fire chief in Charolton County, Georgia, where he was charged with combining five volunteer departments into one.

“I’m looking to slow down a little bit,” he said with a laugh, “but also come to the great city of Port Arthur and help the city move forward.”

Johnson spoke in majority about the importance of the fire department having a good working relationship with the community.

“We have to reach communities and get them to understand we’re there to help them,” he said “We’re there to save lives and property. That’s the core of what we do. If we’ve forgotten that, we’ve got to get back to that. And this is our community.”

The fire chief-hopeful said he lived in Florida for years and is familiar with hurricanes, and also deals with tornadoes at his current job.

When asked why he is willing to leave his current position, Johnson said he’s hitting his stress point by working in multiple management positions.

“I want to concentrate on being a fire chief,” he said. “That’s what I am. I spent my whole life to be a fire chief.”

The other three candidates to interview are Greg Benton, a former fire chief in California; and Robert Havens, interim fire chief in Port Arthur.