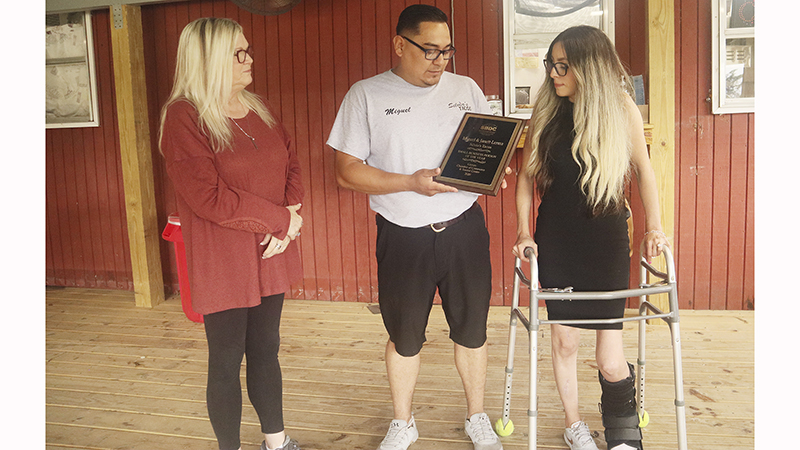 GROVES — After what was arguably the most difficult year for small businesses in the last century, the Groves Chamber of Commerce named Silvia’s Tacos as the 2020 Small Business of the Year Wednesday.

Members of the chamber were on hand at the eatery to present the award.

“It is an honor,” Silvia’s Tacos owner Miguel Lerma said. “I really appreciate that people see the hard work that we put into it and trying to serve good food. It really means a lot.”

“When my wife and I first started it, we didn’t think that we were going to be this popular,” he said. “But you set your goal to be successful in this business. The reaction we got from the community has been more than we expected.

“Last year, we had people parking all around the building. Maybe it was a little bit of a nuisance but all of the neighbors were very understanding. Without the community, we wouldn’t have been able to do this.”

Last year was not easy by any means for the Lerma family. In December of 2019, Miguel, along with his wife Janett and their then-12-year-old daughter Mia, were driving back from a family vacation when they were hit head-on by a drunk driver.

The driver of the other vehicle died at the scene. Janett suffered a broken spine, broken legs, multiple broken bones in both feet and broken ribs. Their daughter Mia broke her femur, wrist and dislocated her hip.

Miguel was able to walk away with minor injuries. In January of last year, the family returned home after numerous surgeries.

The time needed to recover from the crash forced the family to close the eatery for a few months before reopening in March of 2020, just weeks before the worldwide shutdown caused by the pandemic.

Read more about Miguel Lerma’s road back to business in this community spotlight.

Janett is still physically recovering from the crash. She has a cast on her lower left leg and uses a walker to help get around.

“We hated that we couldn’t have a banquet where we could present this award to them,” Groves Chamber Administrative Assistant Debbie Snell said. “We have been trying to plan it all this year. Until recently, we haven’t been able to. It means so much to be able to give this to them. These people are precious. They have been through so much. It is past time for them to receive it and be recognized.”

Miguel said he is happy to be able to serve food the way he grew up eating it.

“I grew up on homemade food,” he said. “Even though it is a little harder to make, because it is a longer process, we can make it fast and still make it good.”