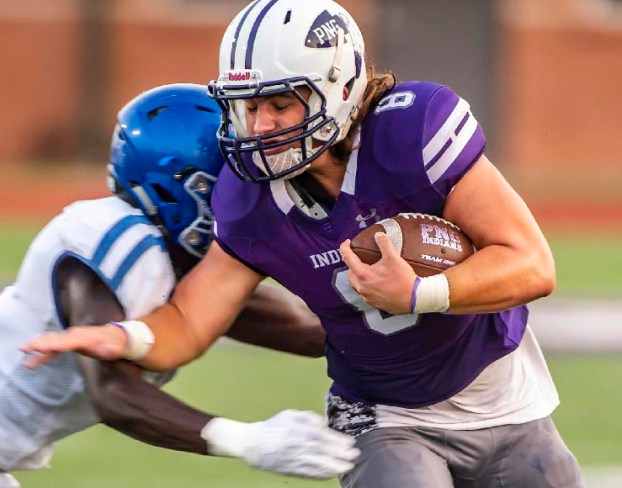 Cooper Hammond of PNG tries to spin away from a West Brook tackler last Thursday. (Brian Vincent/Special to The News) 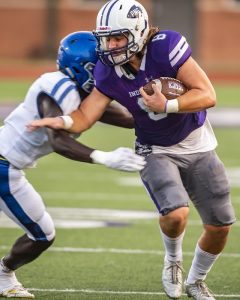 Cooper Hammond of PNG tries to spin away from a West Brook tackler last Thursday. (Brian Vincent/Special to The News)

PORT NECHES — During practice Thursday, coaches could be heard telling the players a familiar sports phrase.

“Game face — get your game face on,” a coach was telling the players as they began warmups.

After weeks of two-a-days and scrimmages, the Port Neches-Groves Indians will finally put pads on against an opponent with stakes attached as they take on the Silsbee Tigers in a non-district matchup Friday.

“We’re very excited,” PNG head coach Brandon Faircloth said. “We had really good two-a-days and two really tough scrimmages. We have a really tough opponent in Silsbee. They’re a really well coached, physical football team. Non-district games are about getting better. Silsbee is going to show us our weaknesses. We definitely have our hands full.”

Faircloth said Silsbee’s offense is explosive and can present a problem.

“They’re really good on offense,” he said. “They scored a lot of points last year. On defense, they are sound. They have a lot of team speed. They have some good athletes over there. They’re fast and physical. They are everything you want a team to be.”

One matchup to keep an eye on might be the PNG secondary against the speed of Silsbee’s skill positions. During a scrimmage with West Brook, the Indians gave up 203 passing yards in two quarters, with 160 of those yards coming on three plays.

Starting senior free safety Tyler Jackson will be available after missing that scrimmage with an injury.

Faircloth said his team is ready to play a game with consequences in front of the PNG faithful.

“I think they are ready to play a game out here at The Reservation,” he said. “They want to be in front of the fans, the band and the drill team. We have such a great atmosphere on Friday nights.”

Getting the players back in a routine has helped them stay focused, Faircloth said.

“During two-a-days and scrimmages, it’s kind of tough to stay on schedule. Now we’ve started school and started a routine, and I think all of the guys are excited.

Kick off is set for 7:30 at The Reservation.

Brian Morgan has signed up for one big birthday party of sorts on Friday, and Port Arthur has been invited.... read more