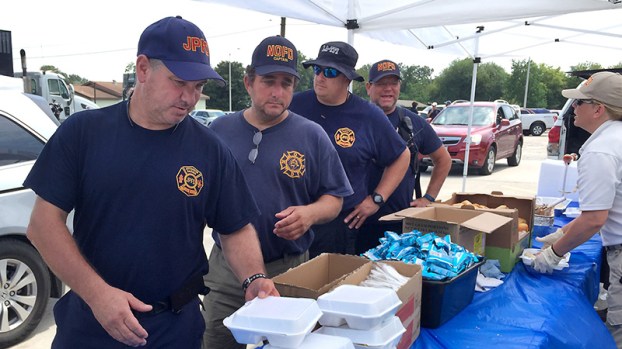 Firefighters from New Orleans and Jefferson Parish, La., take a break from helping residents in West Port Arthur. They lined up at New Hope Baptist Church on West Gulfway Drive at noon Monday for some red beans and rice.

“Friends from New Orleans came to help us,” is how the Rev. Donald Frank described the scene at New Hope Baptist Church on Monday.

Those friends included celebrity chef John Besh, TV personality, restaurateur, philanthropist and author, who plans to be in town for the next several days serving hot meals. Monday’s menu included red beans and rice with plenty of sausage. 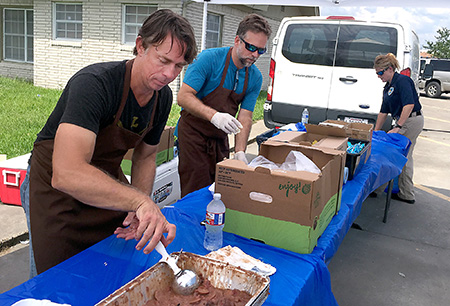 Chef John Besh, left, an award-winning chef, restaurateur and television personality from Port Arthur, was joined by some of his Louisiana friends Monday at New Hope Baptist Church. They were dishing up red beans and rice with plenty of sausage for local residents and emergency responders.

“A bunch of my friends and I got together, threw a bunch of red beans and rice and jambalaya and gumbo — all that good country food from Louisiana — and we brought it over here to share with our brothers and sisters in Texas,” Besh said. “We’ve been there. We’ve had our homes flooded, losing everything ourselves. We understand how important just a little gesture like that can be.”

He and his team packed up what he called a couple of truckloads of food and have been to Houston and Orange. They will be in Port Arthur and Beaumont for the next several days. He said that so far 8,000 people have been fed. 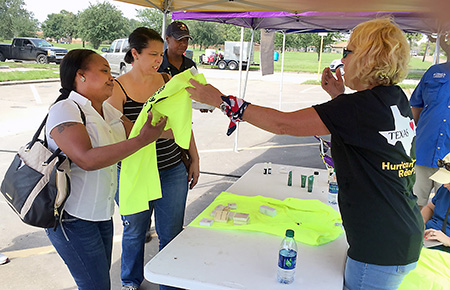 Roshanda, left, a resident of the West Side of Port Arthur, accepts a T-shirt from Lou Broussard of Zea Restaurant in Lafayette, La. Roshanda, who did not want to give her last name, was at New Hope Baptist Church for a hot meal and supplies on Monday. She said her house on 11th Street was flooded by Hurricane Harvey.

Wanda, a local woman who did not want to give her last name, said she lost everything in the Tropical Storm Harvey flood.

“We just appreciate everything they’re trying to do. They’re doing a great job,” she said. “Meals mean a lot.”

The busy parking lot at New Hope could have been mistaken for the site of a festival without the telltale signs of cases of bottled water and cleaning supplies being distributed to anyone in need. While Besh’s trailer was set up on one side, another trailer sponsored by the Louisiana Hospitality Foundation was on the other side. Greg Reggio of the restaurant Tastebuds in New Orleans was the ramrod at that trailer. 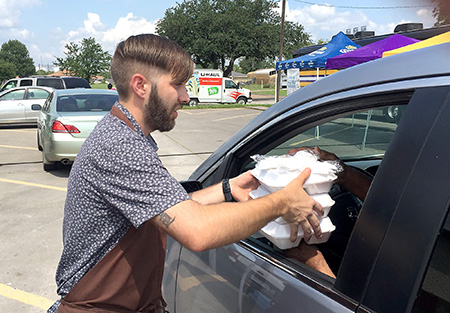 Brody LeBlanc of New Orleans hands hot lunches to a Port Arthur resident in the drive through line at New Hope Baptist Church on Monday. LeBlanc was part of a group traveling with chef John Besh to share meals in areas of Texas ravaged by Hurricane Harvey.

“We’re here to try to help them out because more than likely they helped us out in Katrina. And there’s going to be a time when we need help again,” Reggio said. “There’s a little bit of paying it back and a lot of paying it forward.”

The menu there was chicken and sausage jambalaya.

“That’s being done by my good friend Paul Preau, who owns a company called Jambalaya Girl. It’s the best jambalaya mix around, it really is delicious,” Reggio said. “And from Zea Restaurant, we have Shrimp Breaux Bridge Pasta.”

The Rev. Frank, pastor of New Hope, said the church was high and dry during the flooding. He said there has been an outpouring of help for the community with things like food and cleaning supplies.

Della Dugas, who lives one block over from the church, was at New Hope for food and supplies. She said she got plenty of water in her house.

“It’s just a blessing. We’re so blessed to have people coming from Louisiana serving hot meals,” she said.

‘We are going to get through this,’ says flooded church pastor

Despite a week of changes and the unexpected, one constant for many residents is Sunday morning church. That was no... read more