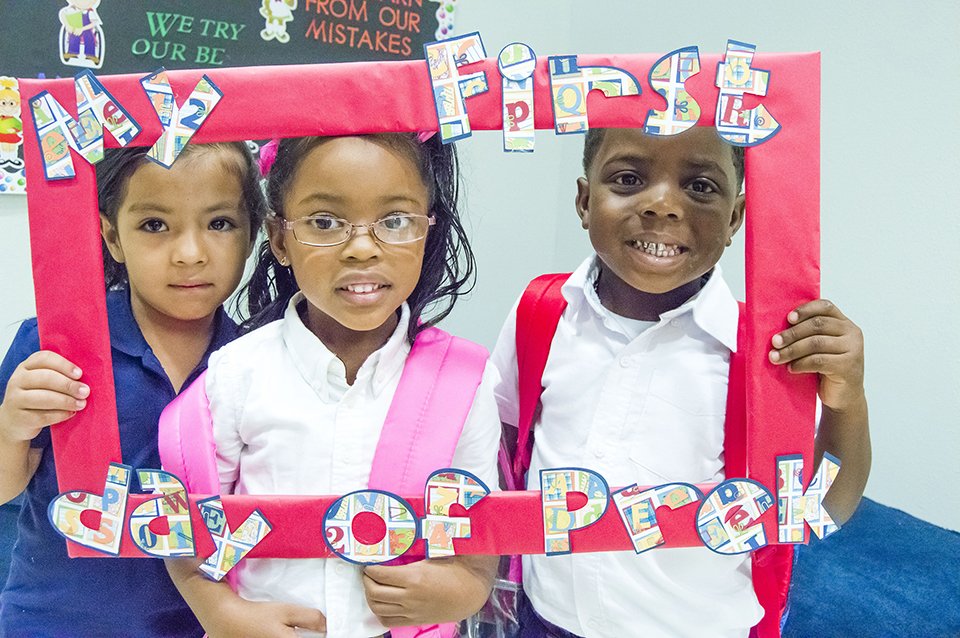 A pre-kindergarten student clung to the wall inside the Wheatley School of Early Childhood Monday afternoon, protesting his mother’s attempt to take him home for the day.

She promised he could return to school Tuesday morning and he relinquished his hold on the wall, adjusting the straps on his backpack before taking his mom’s hand.

Fredia Washington-Simmons, Wheatley School of Early Childhood principal, said the young man was not the only “excited learner” on the first day of school.

“Of course, we’re excited to be back at school, but it’s wonderful to see how eager these students are,” Simmons said. “A lot of our students have never been to school before. We’re one day in and, already, a lot of them don’t want to leave. Our teachers are doing a great job.”

Simmons learned the ins-and-outs of what it’s like for students just starting in Team Wheatley as she roamed the halls, welcoming the “tiniest Titans” to the new school year, complimenting back pack choices and admiring single-file lines as they made their way to the cafeteria for snack time.

“I’m the line leader,” one student said, going in for a high-five with his pre-kindergarten teacher, Natasha Jones. 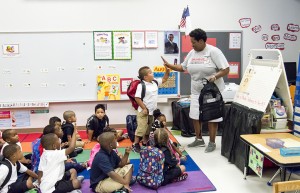 Mark Porterie, Port Arthur Independent School District superintendent, said he and the PAISD board of trustees toured all 14 campuses Monday, checking in with students and teachers to make sure things were running smoothly for the first day of the 2015-16 school year.

“Everything went very well for back to school today,” Porterie said. “Our students looked crisp in their uniforms and happy to be back in school. I got so much positivity from our teachers. They were all ready for the big day and ready to get the year going in the right direction. We’re just elated.”

Porterie said he won’t have the full enrollment numbers until later in the week, but he already plans to hire more teachers.

“I may not have exact numbers, but I know our elementary school numbers are high,” he said. “Some of those classes had 30 kids in them today — we’ll be hiring new teachers.

Stuart Kieschnick, Nederland Independent School District assistant superintendent for curriculum and instruction, said everything “went real well” in Nederland Monday, although he is expecting a big jump in enrollment before Labor Day.

“We’re at 5,077 students now and still enrolling. That number could swell up by another 100 students, easily — and I expect it to,” Kieschnick said. “Region-wide, we’re looking at growing enrollment figures. But we went to all of the campuses today and everybody got off to a good start. Even if we can another huge jump in enrollment, we’re positioned to have a great school year.” 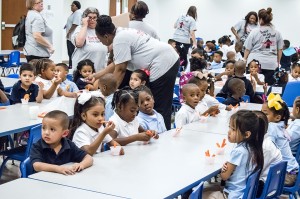 “We had a really great first day with a lot of smiling kids — and I mean a lot,” Cavness said. “We had 5,026 students today. That number went up pretty significantly from previous years.

“Overcrowding is a good problem to have, though. Somehow, some way, we’ll find somewhere to put all these kids,” he added, with a laugh.”

Cavness said he spent most of Monday at PN-G High School and will spend the rest of the week at the elementary and middle school campuses.

“I make sure to visit each one during the first week of school just to check in to see how everyone’s doing,” he said. “The students and the teachers were excited today. The students had their new clothes and school supplies and were ready to get going. Our principals run good schools, so it’s good to be able to walk around and see everyone taking pride in what they’re doing. We’re ready for the rest of the year.”