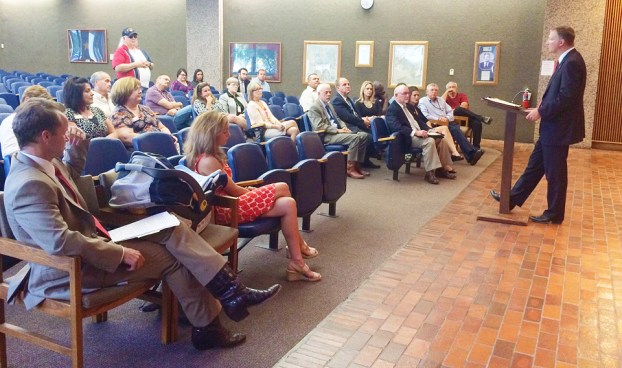 BEAUMONT — The Jefferson County Republican Party rallied behind State Rep. Dade Phelan in the County Courthouse Tuesday as the party tried to sort out what, if anything, could be done about two late Supreme Court of the United States rulings in June.

About 30 party supporters filed into the Jury Impaneling Room to meet with Phelan before getting an official take on Texas’ response to the Affordable Care Act — referred to only as “Obamacare” in the Tuesday night town hall meeting — and to same-sex marriage, two measures upheld in all 50 states by the U.S. Supreme Court this summer.

“It’s not all rosy for conservatives right now, but we are where we are,” Phelan said.

Phelan said he’d received questions about both rulings that could only be answered by a lawyer or a former constitutional law professor. So he brought in Texas Supreme Court Justice Jeff Brown to lead the event.

“What can Texas do about these rulings? Short of what some states did in 1861, there’s not much that can be done,” Brown said Tuesday. “A constitutional amendment would solve this, sure, but I believe that’s an up-hill battle. I’m not optimistic for this to turn around any time soon.”

Brown said the SCOTUS ruling that upheld the Affordable Care Act subsidies does not actually have any effect on Texas as a whole, but the same-sex marriage ruling “went the full mile.”

Brown said the “good news” in the same-sex marriage ruling is “the Court’s decision stops short of saying discrimination against homosexuals is subject to” strict scrutiny — a standard of judicial review for a challenged policy in which the court presumes the policy to be invalid unless the government can demonstrate a “compelling interest to justify it.”

“If strict scrutiny is not available or is not applied, the government only has to offer a rational reason. In those cases where the standard is not strict scrutiny, the policy is upheld over 90 percent of the time,” Brown said. “The other good news is I don’t think we’re headed for a time when pastors are forced to perform same-sex marriages.

“And you’ve heard from your judges here in Jefferson County,” Brown added, referring to the majority of Jefferson County justices of the peace who stopped performing marriages altogether after same-sex couples were given the right to marry in Texas. “We don’t legislate from the bench, and that’s exactly what the Supreme Court did here.

VIDEO: PNG back to work

Port Neches-Groves was back at practice Tuesday. Here is a short video. read more