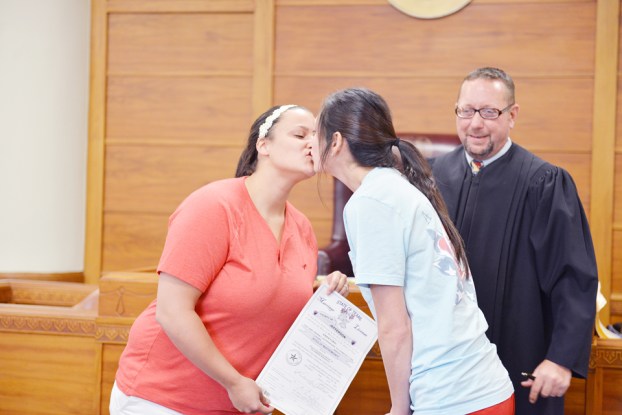 Brides Holly Pryor, 23, of Nederland, left, and Tia Marshall, 25, of Nederland seal their nuptials with a kiss in the Jefferson County Sub-Courthouse in Port Arthur Monday afternoon after Judge Marc DeRouen, Justice of the Peace for Precinct 2, married the "partners in life and presented them to the courtroom as "the Marshalls." The Marshalls, who live in Port Neches and have been together four years, are the first same-sex couple to be married in Jefferson County. They were the first to fill out their marriage license application at the Jefferson County Courthouse in Beaumont Monday morning, arriving to sign their paperwork an hour and a half after the county began issuing same-sex marriage license applications.

The Nederland natives had little time to soak in their situation, or even share a few quiet moments, as waves of media professionals entered the room. Tia joked if she had known they would be under such a stringent spotlight, she probably would have “done something” with her hair. As it stood, the pair looked comfortable in shorts and T-shirts with their hair pulled back into ponytails — a lingering habit from their days as Nederland High School athletes.

Holly and Tia, 23 and 25 respectively, were the first couple to walk into the Jefferson County Courthouse in Beaumont Monday morning and apply for a same-sex marriage license. Holly said even though the county began issuing the licenses at 10 a.m., she and Tia had decided to wait until 11:30 a.m. in hopes of missing the immediate rush of other lesbian, gay and bisexual couples signing up to get married.

But when they arrived at the Courthouse, the pair found the entryway clear of hopeful couples but full of TV and newspaper crews. Tia mouthed, “Oh my God,” as they walked in front of the cameras and into the County Clerk’s Office.

“We actually just got back from the Dominican Republic. We got married there on June 14 — not legally, but we had our ceremony,” Tia said at the Courthouse Monday morning. “As soon as we heard about the Supreme Court ruling, we figured we’d come to the Courthouse and make it official.”

The couple filled out a marriage license — revised to reflect the addition of same-sex marriages after the U.S. Supreme Court ruling Friday legalizing gay marriage nationwide and wiped out a 2005 amendment to the Texas Constitution banning it — and went upstairs where they received a waiver for the standard 72-hour waiting period between signing for a license and actually getting married.

Able to marry immediately, Tia and Holly started calling around to see if there was an available Justice of the Peace. By 1:30 p.m., they were sitting in the courtroom for Marc DeRouen, Jefferson County Justice of the Peace for Precinct 2, in the County Sub-Courthouse in Port Arthur.

“I feel blessed that it’s happening today,” Holly said while she and Tia waited for DeRouen. Tia added the legal marriage won’t actually change their life together — “seeing as we’re already married” — but she thinks the Supreme Court ruling is a huge step forward for the nation and the gay community.

“It was overwhelming hearing the ruling Friday,” Holly added. “I’m excited our community has been embracing it, and the Jefferson County Clerk’s Office has been great to work with — so supportive.” 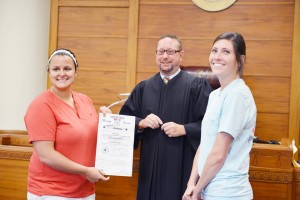 Brides Holly Pryor, 23, of Nederland, left, and Tia Marshall, 25, of Nederland celebrate their nuptials in the Jefferson County Sub-Courthouse in Port Arthur Monday afternoon after Judge Marc DeRouen, Justice of the Peace for Precinct 2, married the “partners in life and presented them to the courtroom as “the Marshalls.” The Marshalls, who live in Port Neches and have been together four years, are the first same-sex couple to be married in Jefferson County. They were the first to fill out their marriage license application at the Jefferson County Courthouse in Beaumont Monday morning, arriving to sign their paperwork an hour and a half after the county began issuing same-sex marriage license applications.

Judge DeRouen said he was “honored and pleased” to perform the ceremony for Holly and Tia Monday afternoon. He said he knows the historical significance of their legal binding and is looking forward to serving more same-sex couples as they fill out their marriage licenses.

DeRouen said he’s in new territory as far as wording the ceremony is concerned, so he took suggestions from Tia and Holly before starting their nuptials — during which DeRouen pronounced the couple “partners in life” before presenting them as “the Marshalls.”

“We talked in my chambers before the ceremony and Holly and Tia decided instead of saying, ‘wife and wife’ or something similar, they wanted to be married as ‘partners in life,’” DeRouen said. “But this is the first one we’ve done, so I’ll have to come up with a ceremony for future couples.”

The Jefferson County Clerk’s Office began issuing same-sex marriage licenses Monday despite a weekend opinion from Texas Attorney General Ken Paxton, who wrote that “county clerks and their employees retain religious freedoms,” including objections to issuing same-sex marriage licenses. He suggested that officials who defy the Supreme Court order could face fines or lawsuits — but said private attorneys were ready to defend them, and even do so for free.

Beaumont residents Don Brown and Daniel Spencer, the second same-sex couple to fill out a marriage license in the County Courthouse Monday, said Paxton’s advice is “disheartening” but symbolic of the historic struggle members of the gay and lesbian community have faced — and must still fight, even after the monumental Supreme Court ruling Friday.

“It represents the struggle we still have ahead of us,” Don said in the Courthouse Monday afternoon. “You have a right to express your religion however you want, but if you are an employee of the government, you are sworn to uphold the Constitution. The Supreme Court of the United States has said it is constitutional, so the people standing in the way of that should be removed.

“But I believe the American people are going to push this forward. I believe America is on the right path. The beautiful thing about America is we may not always get it right, but we’re always working to get it right.”

Don said signing a marriage license with the man he’s been with for “11 years, one month and one day” hadn’t fully set in yet. But “to quote Beyoncé,” he said, “I definitely need to ‘put a ring on it.’”

Don and Daniel said they plan to marry on the Fourth of July, the day their 72-hour waiting period is over.

“This represents us becoming full citizens of the United States, and it is the most beautiful thing,” he said. “Because of the struggle of so many before us we are fulling our rights, finally, as full citizens. I did not think this would ever happen.”

The American Civil Liberties Union of Texas has set up a statewide marriage hotline for gay, lesbian and bisexual couples. For more information, call the hotline at (888) 503-6838.