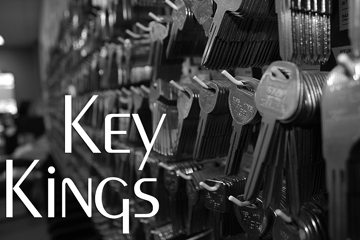 Noack Locksmith and Supply, Inc. on Nederland Avenue boasts an impressive wall of uncut keys. The company is celebrating its 75th anniversary as a family-owned and operated business.

NEDERLAND — Vance Lachausse was shorter than the front counter when his grandfather first brought him into the family business as a future apprentice.

The Port Arthur native said he spent his early years in Port Arthur at Noack Locksmith and Supply, Inc. pushing a broom around until he “learned how to really keep the shop clean” at 6 years old. His grandfather, Walter Noack, quickly taught Vance how to fit keys and took him out on service calls by the time Vance was 10 — giving the child skills he could use in the family business, should he choose to take it over one day.

Vance, now 54, and his wife of 27 years Denise Lachausse, 49, of Nederland became the sole owners in 2006 and opened a second Noack Locksmith and Supply, Inc. location on Nederland Avenue that same year. The Nederland store became the only location in 2009, when Vance decided to close the Bluebonnet shop, and is now the site for Noack Locksmith’s historic 75th anniversary.

Vance and Denise Lachausse, right, took over Noack Locksmith and Supply, Inc., after Vance’s grandfather died in 2006. The couple run the shop on Nederland Ave. with their son Bryan Whitson, left, who works as the shop locksmith. Noack Locksmith and Supply, Inc. is celebrating its 75th anniversary as a family-owned and operated business this year.

“I got to figuring it out one day and it was like, ‘Man, it’s our 75th year.’ That’s a big deal for any business, but especially for one like ours,” Vance said. “Nowadays, you just don’t hear about family businesses making it this long, and in the state of Texas, we are one of the oldest standing locksmith shops that’s family owned. There aren’t very many of us — you can count ’em on just one hand.”

Vance said most locksmith shops start as family businesses run by husbands and wives or fathers and sons. But if there aren’t any new generations to pass it down to or the younger generations don’t want to take it over, he said, the business either leaves the family or shuts down completely.

“We’re three generations, going on four,” Vance said — pointing at his son Bryan Whitson, 32, of Nederland — inside the shop. “If my grandson comes in, that would be the fifth generation.”

Denise started working at Noack in 2008, followed by Bryan in 2012. Dense said they pride themselves on keeping the business as close to Walter’s as possible. The only thing they’ve really changed about the services provided, she said, is the price list.

Noack Locksmith and Supply, Inc. on Nederland Avenue is home to an array of skeleton keys. The company is celebrating its 75th anniversary as a family-owned and operated business.

“As it’s become more expensive to run the business and buy supplies, we’ve had to increase our prices. But every old business has had to follow that line. If we still charged what my grandfather charged on opening day, we’d never make it.”

Walter was in his late 30s when he opened Noack Locksmith and Supply, Inc. on the corner of Bluebonnet Avenue and DeQueen Boulevard in Port Arthur in 1940. He ran the business until he died in 2006.

Vance said he remembers working in the Port Arthur shop every summer until he finished school and moved away. He said he was working in Dallas when the family called him, asking if he could come back to help run things when Walter first “fell ill.” He’s been the face of Noack Locksmith and Supply, Inc. ever since.

Noack Locksmith and Supply, Inc., now located on Nederland Avenue, boasts an impressive wall of uncut keys and a collection of functioning key cutters, used inside the shop since first opened on Bluebonnet Avenue in Port Arthur in 1940. The company is celebrating its 75th anniversary as a family-owned and operated business.

“My grandfather taught me everything,” Vance — who still refers to the company as “my grandfather’s shop” or, simply, “Noack’s” — said. “There wasn’t ever a question about me coming back if he needed me here. We’ve had it on our own a couple years now, but I still work as if I’m riding along in my grandfather’s service truck.

“On every job, I don’t leave until everything is working like it should. Sometimes I have to put people on a waiting list — and it can get pretty backed up — but we give everyone our full attention once we make it out there. The best we can do is work everyone in as soon as we can, and do right by ’em when we get there.”

Vance said Noack Locksmith has been “blessed with some major accounts” and loyal customers throughout its company history, and he and Denise have been “blessed to keep them.”

“Sometimes when I’m telling someone there’s a waiting list and if it’s not an emergency, it’s going to take us one to two weeks to get out there,” Bryan said. “I can’t tell you how many people have said, ‘I’ll wait for Noack’s’ or ‘I’ve always used Noack, and I’m sticking with Noack.’”

“Or people will have a bad experience with another locksmith company and ask around for a recommendation, and people send them to Noack’s,” Vance added. “That’s what my grandfather built and what he taught me. Treat everyone the same. Give them all your full attention once you make it out there.”

Vance Lachausse keeps an original business card, which belonged to his uncle and shows the historical number for the shop’s old Port Arthur location, for Noack Locksmith and Supply, Inc. in the glass display counter at Noack’s new location on Nederland Avenue. Vance and his wife Denise are celebrating the company’s 75th anniversary as a family-owned and operated business this year.

Vance said the Noack team shares the business responsibilities, but the biggest job in any family business is one everyone must share.

“We all have our areas of things we do, but our job is all the same — just help each other out,” he said.

“We’re here to support each other and do what needs to be done,” Denise added. “Any kind of family squabbles have to be left outside that door. If not working as a team, we’re not in business.”

BEAUMONT — Thirty-two of the county’s brightest students will have a little help with their future courtesy of Jefferson County... read more