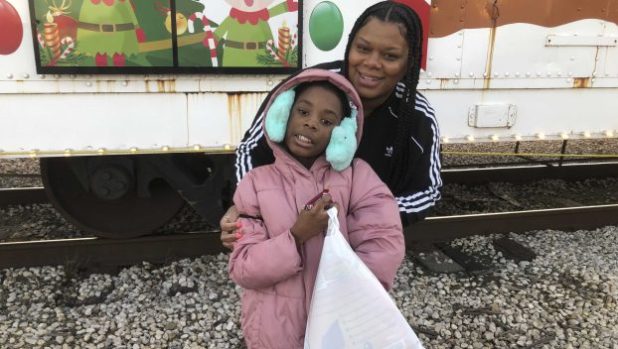 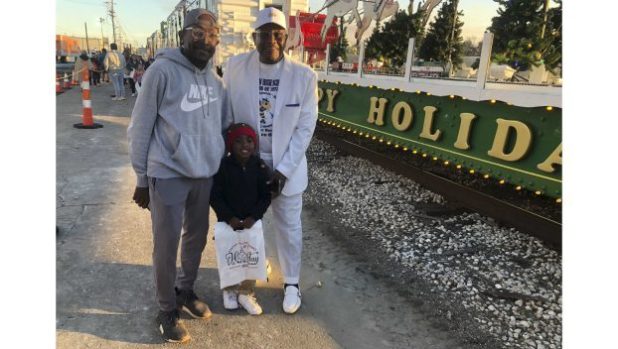 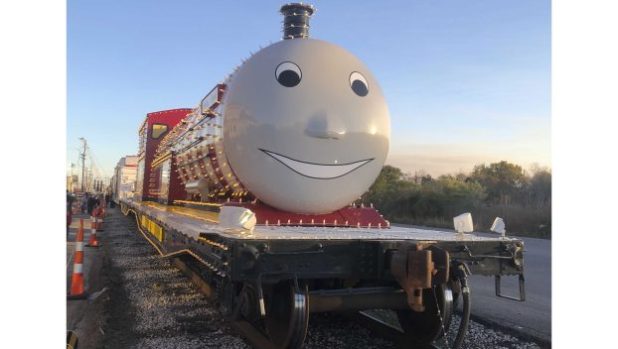 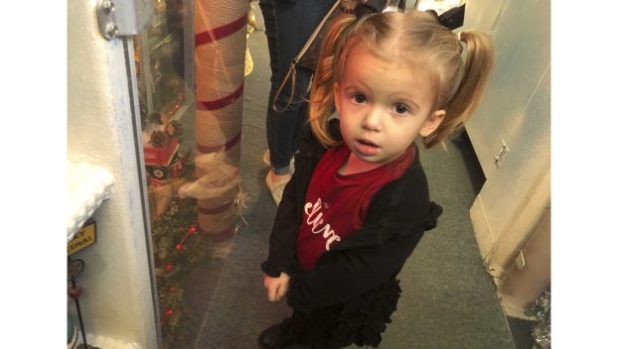 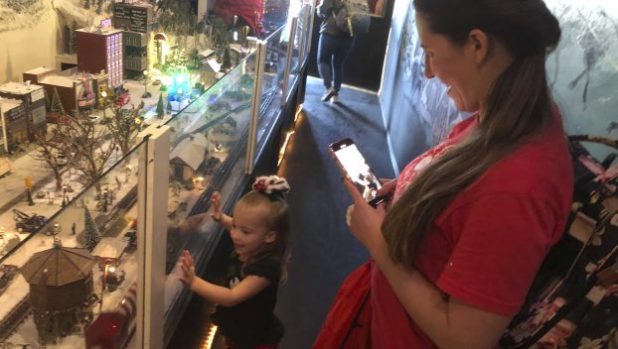 Stacie Cooper takes a photo of her daughter Paris Cooper, 2, as she looks at a display inside the train. (Monique Batson/The News) 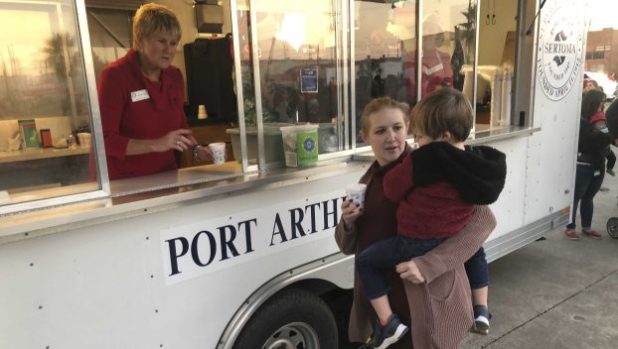 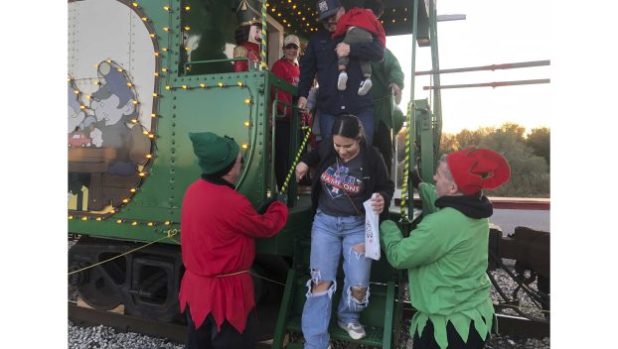 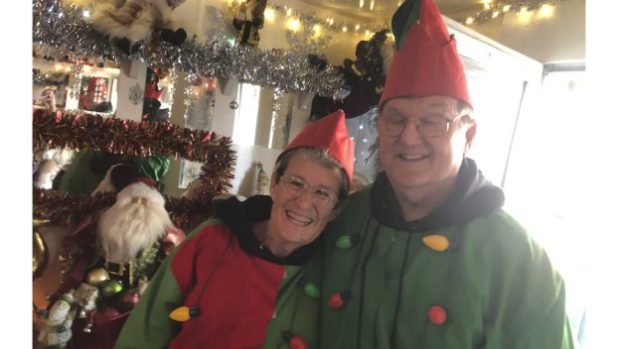 Elf Barbara and Elf Marty are on board the KCS Holiday Express Train. (Monique Batson/The News) 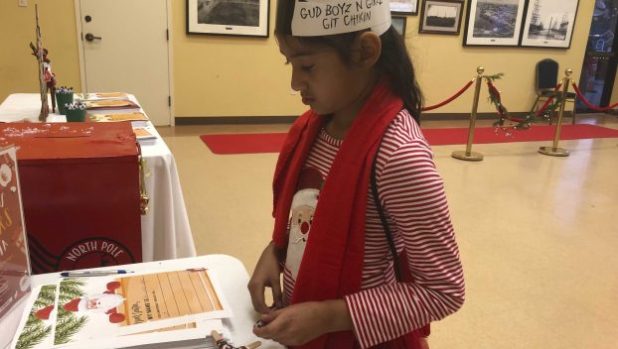 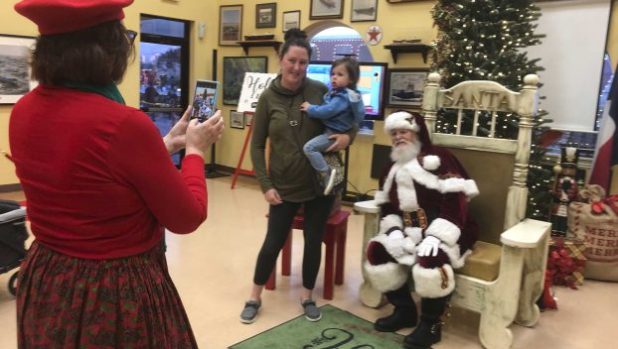 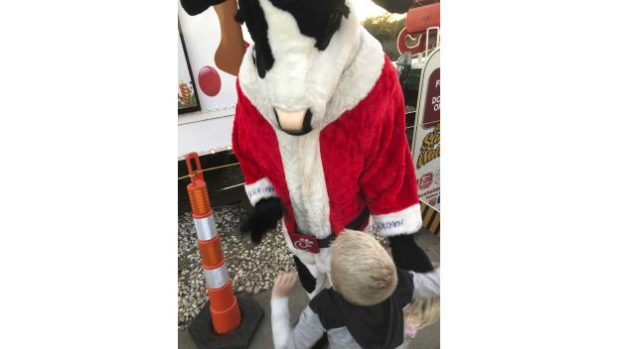 Beau Burnett, 7, hugs the Chick-fil-A cow. In front of him is his sister, 5-year-old Bryley Burnett. (Monique Batson/The News)

The holiday spirit quite literally rolled into Port Arthur Thursday with the arrival of the Kansas City Southern Holiday Express Train.

Hundreds of people from Southeast Texas waited in line at the Port Arthur International Seafarer’s Center to begin an experience that included caroling, writing letters to Santa, taking pictures with Santa and touring the train that hit the tracks this year for the first time since the beginning of the pandemic.

“KCS is thrilled that we can once again run the Holiday Express train and stop in communities along our rail network,” said KCS president and CEO Patrick J. Ottensmeyer in a written statement.

“We are grateful to the many donors who continued to support the virtual Holiday Express program over the last two years, and look forward to another successful fundraising campaign to help The Salvation Army help people who need it most during the holiday season.”

The train, which has been touring for 21 years, has raised nearly $3 million for those in need. But admission to the experience was free, as was the 125 gallons of hot chocolate given to guests by the Port Arthur Sertoma Club.

Members, who made the popular drink in large boiling pots, said they were asked to provide 2,000 cups, as that’s how many patrons were expected to visit.

“I am right now in Port Arthur at the Seafarer’s facility, which actually was known as the old Kansas City Southern train depot at the end of Procter Street and Houston Avenue in the great city of Port Arthur Texas,” Mayor Thurman Bartie said in a video message.

“We are glad for the great citizens of the great city of Port Arthur to begin the holiday season with the arrival of this holiday train from KCS.”

But residents from well outside Port Arthur were in attendance, such as Savannah Cantafio, 2, who eagerly toured the train in awe as her mother followed behind. Cantafio is from Port Neches.

Also from Port Neches was Beau Burnett, 7, and his sister Bryley Burnett, 5.

Beau said he had a great time, and that “the trains that run under us” was his favorite part.

Briceidy Lopez, 8, thought hard as she wrote a letter to Santa inside the Seafarer’s Center. The Port Arthur child put “a cat” as the single item under her wish list.

The train leaves Port Arthur Thursday to head for Leesville, Louisiana, where it will open at 4 p.m. Friday at 901 South Third Street.