Holiday Express 2022 making special stop in Port Arthur, bringing with it the history of the city 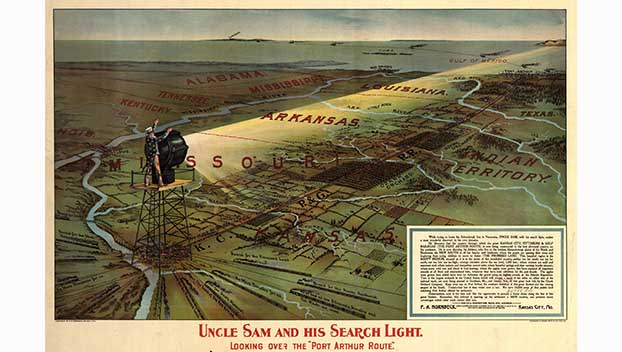 A promotional portrait for Arthur Stillwell’s railroad. (Photo courtesy of the Museum of the Gulf Coast)

With the train comes the story of the city.

In 1887, Arthur Stillwell created what was then called the Kansas City Suburban Belt — a railroad that would stretch from Port Arthur to Kansas City. 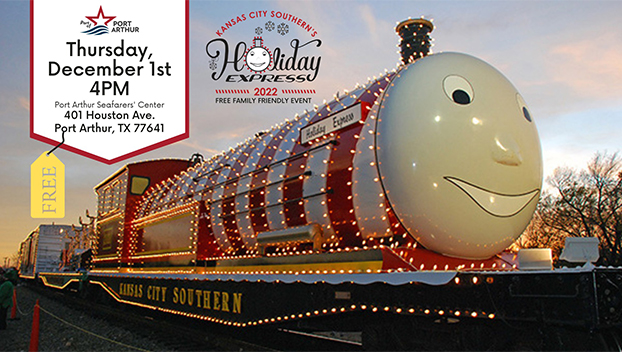 The Port of Port Arthur is excited to announce the KCS Holiday express has returned to the rails and plans to make a stop in Port Arthur.

“He built it here and named two cities — Port Arthur and Nederland,” said Sam Monroe, president of the Port Arthur Historical Society. “Nederland was started to honor those who gave him the money to start the railroad.”

But the man Monroe described as a prolific writer that kept records of his thoughts had a dream.

“The dream told him to name (Port Arthur) for himself,” Monroe said. “Here he built facilities, laid out the city and hired planning engineers to design the city’s residential and commercial districts.”

The purpose for the railway was to give farmers and agricultural communities access to the coastline for export, as well as to open an opportunity for imports. And along the course of the tracks, Monroe said, Stillwell created 40 cities — although only one bears his name.

Originally he planned to extend the railway past Port Arthur.

“He was intending to build the railroad to Galveston,” Monroe said. “Again, in a dream, he was told Galveston would be destroyed by a hurricane.”

Four years later, what is still considered to be one of the worst natural disasters in history killed as many as 12,000 people on the island.

According to information from the Museum of the Gulf Coast, John Gates, who founded Republic Steel, invested in Stillwell’s railroad but ultimately took control.

“After being forced out of various investments, Stilwell began to write and publish books,” one of which attacked Gates and others as “cannibals” for taking control of the railroad, the Museum says in its Hall of Fame. “These ‘cannibals’ may have been less predatory than Stilwell made them out to be, as Stilwell himself was notably unstable. He claimed that all of his business ventures were dictated to him by voices from the spiritual world.”

Still, Monroe said, Kansas City Southern credits Stillwell as its founder and not long ago gave copies of one of his books to their executives as Christmas gifts.

While the Kansas City Southern Holiday Express frequents Port Arthur, it does not come annually.

“It’s good that they’ve kept us on the list because other cities up and down the line have grown, but they remember their roots,” Monroe said. “Its historical significance reminds us all of our roots.”

The Holiday Express is a free event and will be at the Port Arthur Seafarers’ Center, 401 Houston Ave. on Dec. 1.

While the train has made holiday rounds for more than 20 years, this will be the first time since 2020 for it to return.

According to information from Kansas City Southern, the fundraiser for the Salvation Army has raised more than $2.6 million.