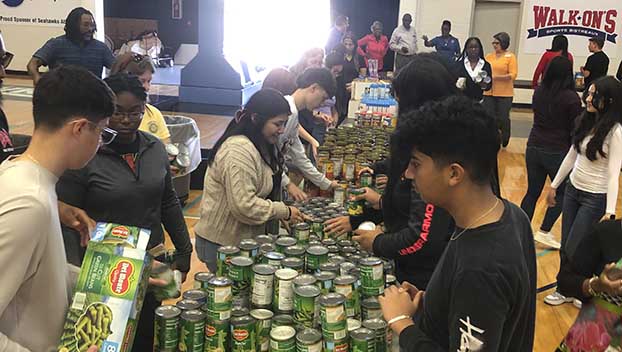 There was more than $3,000 in the envelope Port Arthur LNG handed to the Port Arthur Rotary Foundation Wednesday night.

There was also relief.

And there was so much hope.

What the amazing people at Port Arthur LNG didn’t know as they awarded $56,000 to 18 non-profits during the second annual Season of Giving was that, two days after applying for the grant, those of us in the Rotary Club of Port Arthur learned the funding for our annual Thanksgiving food project had been cut so substantially we would only be able to provide 50 of our usual 125 Thanksgiving dinners to economically disadvantaged families in the region.

We submitted the grant application in hopes of increasing that number, and then had to fight just to match what we had done in the past.

And with the help of that grant combined with generous donations from the community, as well as our own members, we are feeding 150 families this year.

Every envelope was filled with so much more than a check.

It was apparent in the way Debbie Perkins, executive director of the United Board of Missions, immediately hugged Sempra Infrastructure External Affairs Director Kelly Oden-Prasser and Port Arthur News Publisher Stephen Hemelt when she was called to the stage to receive $3,000.

It was felt by everyone as Councilwoman Charlotte Moses wiped the corners of her eyes after Charlotte’s Cupboard was presented with a $5,000 grant for their food pantry.

Because the people who are working behind the scenes aren’t just trying to better the community, they are part of it.

Constable Christopher Bates was in attendance for the awards reception, where officials announced his annual Christmas with the Constable Toy Drive on Dec. 1.

The communities of Port Arthur and Mid County aren’t just close in proximity, but also a tight-knit group of people constantly working to serve those in need.

Last year during the inaugural Season of Giving grants, I was in attendance as a representative of The Port Arthur News. And to watch the individual non-profits be presented with funds was a wonderful sight.

But this year, as a representative of a receiving organization, I gained a whole new perspective on what it means to be part of a community that truly cares for those in it. As someone who sees the monthly financial statements of a service organization working to provide holiday food, Christmas toys, car seats for parents in need, and a multitude of other projects; that envelope reinforced my faith in people.

Oden-Prasser said it best at the beginning of the program when she said, “We know that in order to have a safe community you have to have a healthy community, and to do that that means I can’t be hungry. I can’t be without a place to stay. I can’t not be able to pay my bills. I’ve got to be able to get my basic needs met and that’s what all of these organizations here tonight represent.”

And on behalf of the Rotary Club of Port Arthur and 150 families that will get a complete Thanksgiving meal this year, thank you Port Arthur LNG.