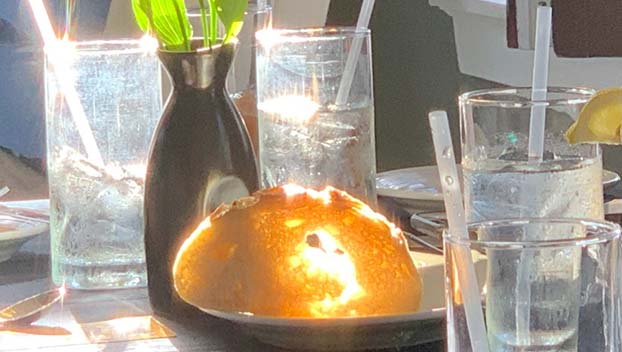 Break bread with friends and family as often as you can. (Darragh Doiron/Special to The News)

Just a few decades ago you weren’t having a “meal” unless you there was bread.

Now it’s sort of a luxury for those keeping carbs at a distance.

I had the pleasure of making new acquaintances recently. When the setting sun shined through some “holy” bread, I found symbolism in the breaking of the bread, bread and water and good conversation.

Good thing cameras are so handy.

Bread and water are the basics. Here are some other liquids that enhance our tables:

Livvy – Pineapple Hibiscus is one of the Livvy wine-based hard seltzers with dandelion, licorice and ginger roots.

In Texas, we may prefer Prickly Pear Lemonade, but there are plenty of reasons to drinklivvy.com. They’re focusing on real fruit juice and other good stuff. I’m finding it’s all good stuff out of these slender, calmly-colored cans.

Zoup – Two guys and some oregano is behind a casual soup franchise. I’ve shared Zoup! Broth with you before and now you can get jars of something new: Seafood broth that’s good enough to drink.

Southeast Texas has fresh seafood, and Zoup! can add depth to all of it. Lobster, shrimp and crab goes in there. Confession: I may already have confidence in my cooking, but I may be lazy. Zoup! said it was good on it’s own and that is exactly how I served it. Go to zoupbroth.com to get something that lives up to label claim that it’s Good, Really Good.

No Need to Pretend – Don’t think powdered oat milk or ice cream mixes are “pretenders.” They’re real things on their own and I’m enjoying Upright Instant Oatmilk for an easy breakfast mix.

Look for the Upright giraffe on the package. I tried it in HIJINKS, a powder inviting you to create your own signature ice creams in your blender, and befriend snapping turtles.

If you can’t think of your own, try their tips for add-ins to create Blueberry Goat Cheese, Matcha Mascarpone and Bourbon Brown Butter. I didn’t happen to have all that when I got the craving, so I’ll tell you, blueberries, vanilla and walnuts became my signature on Sunday.

Stop the Stink with Purggo. A hemp case holding bamboo charcoal will absorb odors a whole year with a main ingredient you could eat (see video at purggo.com) but I’m good with slicing open the sleek hemp casing to use those sustainable charcoal bits in my garden.

That’s also in the video. It looks like a fancy pillow but you attach it to the back of your headrest. It’s fancy and it has been a working conversation piece in my car.

Darragh Doiron is a Port Arthur area foodie who loves how flavors shape our memories. Share yours with her at darraghcastillo@icloud.com.