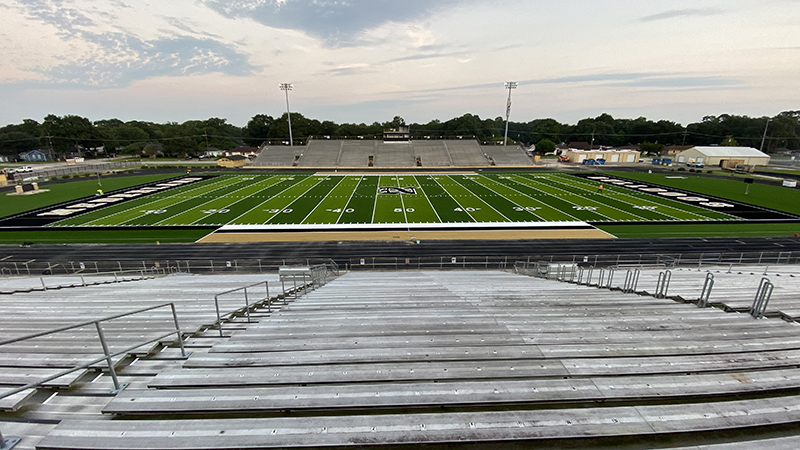 This shot of the installed turf shows the alternating shades of green used for the field, which was a stylistic choice on the part of NISD. (Courtesy of H.B. Neild)

NEDERLAND — Bulldog Stadium has sat in the heart of Nederland for nearly 70 years.

The stadium opened in 1954 and has seen an abundance of success on the field. Two years after the stadium was built, the Bulldogs, led by Bum Phillips, went to the 3A title game, where they fell 3-0 to Garland. The following year, the Bulldogs went 14-0 under first-year head coach Emmett McKenzie, beating Sweetwater 20-7 for the 3A championship at Bulldog Stadium, which also hosted the 1956 final.

The stadium has its fair share of moments that are part of Nederland legend.

Head Coach Monte Barrow has been part of the stadium’s history as a player and coach.

“My junior year, I was playing quarterback and we beat Port Neches for the first time in 20 years,” he said. “At the time, they had a fence around the field. All our fans were jumping the fence and running onto the field. My senior year, we were playing (Thomas Jefferson) and we were down 19-0 at the half. We came back and won 21-19. Those were special times.”

MORE COVERAGE: Memorial Stadium’s history of excellence appreciated by many.

Barrow also has had the rare opportunity to coach both of his sons, which he lists as his favorite moments at Bulldog Stadium.

“That is special no matter the opponent,” he said. “I have those memories and will cherish them the rest of my life.”

Barrow was also part of what is likely some of the most iconic plays in the stadium’s history.

“It is all of the little clips that go off in my head and the little moments they had,” he said. “One that comes to mind is the Troy Sumrall 99-yard run, dragging a guy the last 15 yards to the end zone.”

Now the Nederland Independent School District board president, Micah Mosley also remembers seeing that play as a young fan. He mentioned the long run and recalled Sumrall dragging a defender 10 yards. When asked about the difference in distance between his story and Barrow’s retelling, Mosley laughed and said “It might be 20 if you start calling people.”

Mosley, who is one of the most accomplished running backs in the school’s history, said he also enjoyed plenty of memorable moments at Bulldog Stadium. But some of his most fond moments surrounding the stadium came before his high school years.

“Starting out as a little kid in elementary school, you begin to think of the Nederland Bulldogs as a professional football team. There is a lot of admiration,” he said. “You get to middle school or junior league, where you are allowed to play on the big field, and that is like playing in the Super Bowl.”

Mosley, who played college ball at North Texas, played against the Sooners at Oklahoma University, but said it is not the same as playing in front of home fans at Bulldog Stadium.

“Against PNG, the lights are a little brighter. The fans are a little lighter and the stands are packed,” he said. “…It is hard to match.”

Mosley and the school board has overseen the renovations to the stadium as part of the 2019 bond election.

The upgrades were part of a $4.5 million proposal and included replacing the grass field with turf, a new press box, ADA compliance requirements and upgrades to the restrooms and concession stands.

“I think it was something that was needed to keep up with the times,” Mosley said. “A lot of programs are transitioning to turf. Turf is not just a football thing. Our band, Westernaires get to perform and it not be in a mud hole. There are an unlimited amount of JV games, where we don’t have to worry about it tearing up the field for Friday.”

The turf was put in prior to last season and renovations are still underway as the football season approaches. Nederland’s first home game will be against Silsbee Sept. 9.