Memorial Stadium’s history of excellence appreciated by many 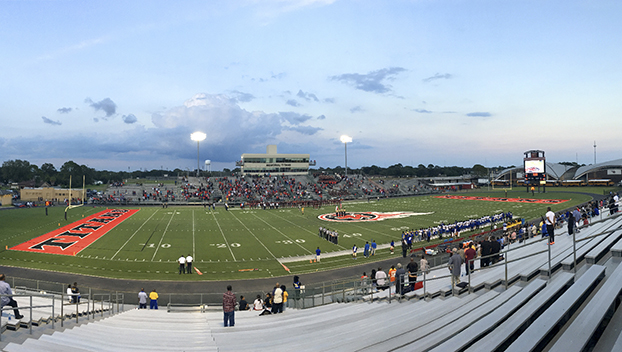 Memorial Stadium has been the home to four high schools over the past 86 years. (Morgan Jones/Special to The News)

There is a lot of history packed into Memorial Stadium in Port Arthur.

The home turf for the Memorial Titans used to be home to Lincoln, Jefferson and Austin High Schools.

The Stadium was built in 1936 and underwent little change until the Port Arthur high schools were consolidated to make Memorial High School in 2002. The stadium’s name predates the newest high school.

The stadium seats up to 12,200 people. In 2009, the Port Arthur Independent School District passed a bond to replace the grass field with turf and a new press box.

The Stadium is currently undergoing a turf and scoreboard upgrade that is scheduled to finish before the football season begins next month.

Memorial Head Coach Brian Morgan last played on the field in 2000, when he was a senior at Thomas Jefferson High School.

“There are a lot of memories there for me,” Morgan said. “The locker rooms haven’t changed since I was in school. A lot has changed with everything being turf and a whole different kind of feel to the field.”

The stadium’s footprint is also fairly unique, with the “odd-shaped gym and auditorium” sitting just off to the side.

“That is usually a point of conversation between me and the opposing coaches during the pregame warm ups,” Morgan said. “They always want to know what that is, and it gives me a chance to give them the history about how we were three schools.”

Morgan’s favorite game on the field involves a familiar foe.

“My favorite game might be when we beat Port Neches my senior season,” he said. “That was a good game and that game really brings back some memories.”

Morgan said his favorite memory on the field does not involve a play but rather what happened after a game.

“We played the last game of my senior season (at Memorial Stadium),” he said. “We won the game and were waiting on the outcome of the Nederland and Port Neches game to see if we made the playoffs or not. We were sitting on the field listening to the radio. Our game was over, and we were just sitting in the middle of the field. I don’t even remember who won. One of them missed a field goal. I think Nederland beat Port Neches, who missed the field goal. That was how we got in the playoffs.”

Morgan said the team and fans broke out in a celebration because TJ had not made the playoffs while he was in high school up to that point.

Since the University Interscholastic League changed the rules to let higher seeded playoff teams host the first round at their home stadiums, the Titans played two home playoff games. Both ended in a loss for Memorial, but the games were decided by a combined 10 points.

The Titans had their first undefeated regular season in 2020, becoming the 15th team in Port Arthur to do so. One state championship team has called Memorial Stadium home, with the TJ Yellow Jackets winning in 1944. Their previous championship was in 1929, which was prior to Memorial Stadium.

The Titans host Nederland for their first home game of the season Sept. 2.