The Port Neches-Groves football team is midway through the summer program and the student-athletes already have high expectations heading into the fall.

PNG, which returns most of its starters on both sides of the ball from 2021, went three rounds deep in the playoffs.

Defensive lineman Isaac Baker is returning to his role on the defensive side of the ball for his senior season. Baker played defensive line last year for the purple and white. 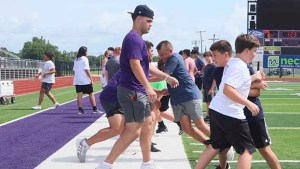 The defensive end is spending a lot of time around the facility during the summer.

On top of attending the summer workout program, Baker was present for the school’s youth camp, where he helped coach younger defensive linemen.