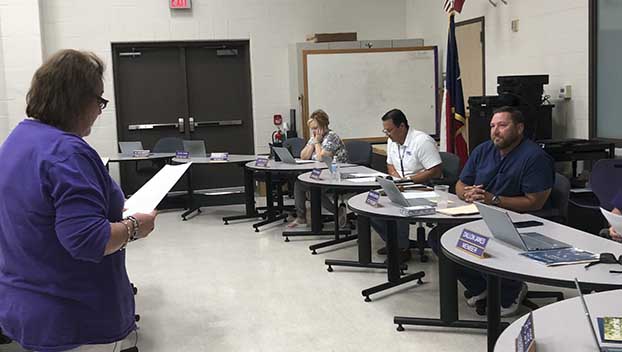 Noah Jackson was present Monday at the monthly meeting for the Port Neches-Groves Independent School District Board of Trustees.

But about eight months ago, the high school student had been declared dead after going helmet-to-shoulder during a junior varsity football game.

“What we experienced on that night is something I do not wish on my worst enemy,” said Kim Jackson, Noah’s mother. “I do not want any other parent to have to go through what we went through.”

Kim spoke to board members about Oct. 14, 2021, when Noah suffered a brain injury so severe, he was in Texas Children’s Hospital for 40 days. Part of his skull was removed to allow for swelling.

“These boys are playing full force and giving all they have on that field,” Kim said. “These accidents can happen; I understand that.”

Kim was pleading with the district to staff ambulances at all games.

“I understand it is not a (University Scholastic League) requirement to have an ambulance at games that are not varsity level,” she said. “I’ve been told that’s because they feel they do not hit hard enough to have one at the non-varsity games. I’m here to tell you, our kids deserve to have them there.”

The UIL does not require ambulances at any sports game, but does require each district to have a vehicle readily available for emergencies.

“There is no requirement for schools to provide ambulance service, or other emergency service at high school football games,” said Julia A Zachary, UIL communications coordinator. “The lack of available services in some areas would cause schools to cancel games if ambulance service was required.”

“He told us he’s only seen that extensive of a brain injury in head-on motor vehicle collisions going 90 miles an hour,” Kim said. “My son was non responsive on the sideline. I’m sure any of you who were there saw that my family and I started praying over him. That was all we could do at that point. As a mother it felt like hours before the ambulance arrived.”

Once the ambulance was on scene, the paramedic called for Lifeflight to meet them at the airport, Kim said.

“My son was dead on arrival when we got to the airport,” she said. “The Lifeflight crew worked on him for 30 minutes to resuscitate him, intubate him and place him on life support before they could even take off for Houston. Minutes do count. Our kids deserve to have medical attention readily available.”

Kim’s statements were made during the patron presentation of the meeting, which means board members are not required to respond. Still, Vice President Brandon Cropper did.

“Ms. Jackson thank you for the courage it takes to stand up and present that,” he said. “And Noah, thank you for being present. You are a walking miracle.”

Kim thanked the district and community for their support during Noah’s recovery.