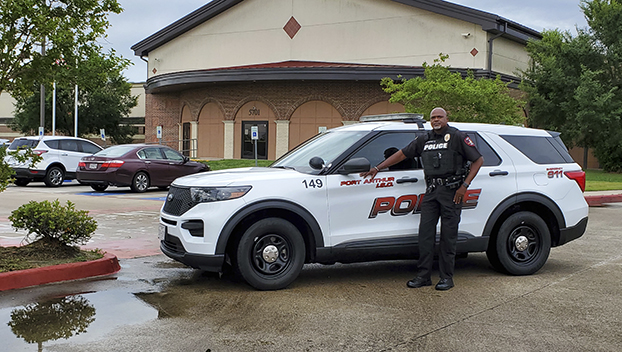 Port Arthur Independent School District Officer John Fontenette stands next to his police vehicle outside Adams Elementary School on Wednesday. The district’s police regularly patrol the elementary schools and have a presence at all secondary schools. (Mary Meaux/The News)

A more visible police presence was seen across the area Wednesday in reaction to Tuesday’s mass shooting at a Uvalde elementary school.

But safety precautions have been in place locally for some time now, officials said.

Some districts such as Port Arthur have their own police department, which has a presence at all secondary schools and patrols the elementary schools.

Adrienne Lot, media and communication specialist with Port Arthur Independent School District, said Wednesday the doors to campuses were locked and there are intercoms at entrances, as well as security cameras.

And as the school year comes to an end, some PAISD campuses are not rotating classes during the day while others have prohibited students from bringing backpacks. 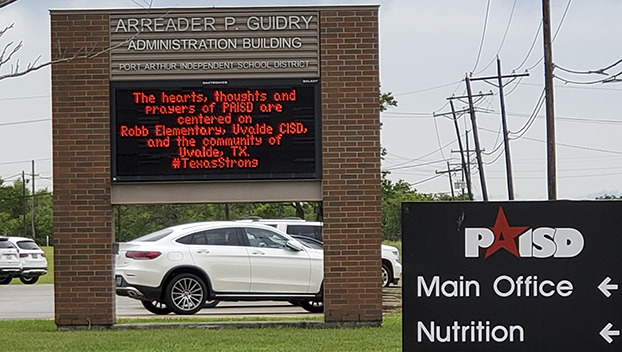 There are also metal detectors at all of the secondary campuses and the football stadium.

“What happened in Uvalde serves as a reminder that we must be on alert at all times when we are at school and to make sure all entry doors to schools are locked,” said PAISD Police Chief Alton Baise. “We must not allow ourselves to become complacent.

“PAISD officers and staff try to remain vigilant in our security efforts to not allow visitors access into our school instructional areas. My condolences to the families of the students and adults who lost their lives in this senseless, random act of violence at the Uvalde elementary school.”

The longtime educator said the district has safety standards and protocols in place. She declined to speak on specifics, but said there are people on campuses who are trained.

In addition, there are regular patrols of schools by police, and officers are present at the high school.

She said the employees of the district are proud to protect and educate the district’s children but that support goes further.

“It’s not just employees. It’s the communities, the cities of Port Neches and Groves who support us in every way,” Gauthier said. “It’s the police and fire. We are only as strong as our community, and that makes our district strong.”

Gauthier said the mass shooting Tuesday at Robb Elementary School in Uvalde is devastating to her, as an educator, but leads her to further conversation. She said one can sit and talk safety measures all day, but how society raises children must also be addressed.

She said there are tendencies seen in the younger grades that, when brought to the parents’ attention, are not addressed. But when school and parents work in unison, success can happen.

Gauthier said it was absolutely heart breaking to learn of the news of the shooting as it unfolded.

“It’s everything you never want to happen,” she said. “We’ve done the training. We’ve done the drills, and all the things difficult for us to do then we see something like that unfold. I have no words to describe it.”

The safety protocol directs that doors to all campuses are locked on the outside and there is semi-regular in-service training for safety and security for employees.

“In addition, every school has an Emergency Operations Plan, which is revised every fall. There is safety and security money built into the bond to add security cameras and such at campuses,” Kieschnick said.

NISD is currently working on projects related to a 2019 bond passed by voters.

“It’s the absolute worse thing that can happen when you think about school safety,” he said. “Before you can teach any child, the child has to be safe and feel safe. It is our job to make sure that happens. Our hearts, condolences and prayers go out to the people and community of Uvalde.”

Dr. Bobby Lopez, CEO and superintendent of Bob Hope Schools, declined to speak on the specifics of their safety protocol as he wanted to be sensitive to the tragedy in Uvalde. But he said the protection they offer their children is very safe.

Lopez grew up in Uvalde and went to Robb Elementary as a child, he said.