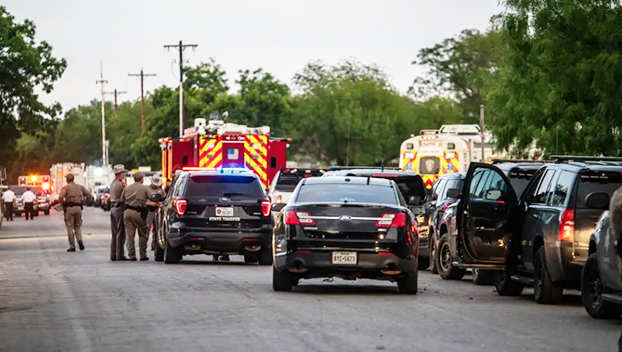 Police block off the road leading to the scene of a school shooting at Robb Elementary School in Uvalde. (Sergio Flores/The Texas Tribune)

Two weeks ago Dr. Bobby Lopez was in the town of Uvalde for his 45th year class reunion.

He compared the size of the community as slightly smaller than Nederland, and called it an inviting place to live with friendly people who, for the most part, know each other.

Lopez, CEO and superintendent of Bob Hope Charter School, grew up in Uvalde. 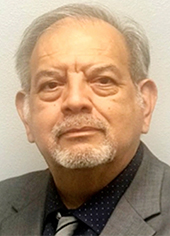 Dr. Bobby Lopez is CEO of the Bob Hope School.

He was once a student at Robb Elementary School, where Tuesday a gunman fatally shot 19 children and two teachers.

“I’m still in shock,” Lopez said when asked his thoughts oof the shooting. “This is very senseless on all levels. I’m still trying to sort my feelings out. We’re stunned and outraged.”

Lopez said he made a call to offer condolences and prayers to Dr. Hal Harrell, the superintendent of Uvalde Consolidated Independent School District.

Tuesday’s carnage at the school has been called the deadliest in Texas.

Lopez said he contacted a few friends though Facebook who were there who had grandchildren at the school and learned one of them had a relative who had been shot and passed away. He called the loss of a child so young a senseless killing.

Family, he said, comes before anything else. And, as leader of the school district, the first thing he thought of was the students.

As a father, he was also thinking of the parents.

“She saw the helicopters and didn’t know what was going on until she was in the house,” he said. “Then she heard of the shooting and locked herself in the house.”

Lopez wants people to keep the community of Uvalde in their thoughts.

“It will be a very difficult time for them,” he said. “We need to offer all of our prayers.”