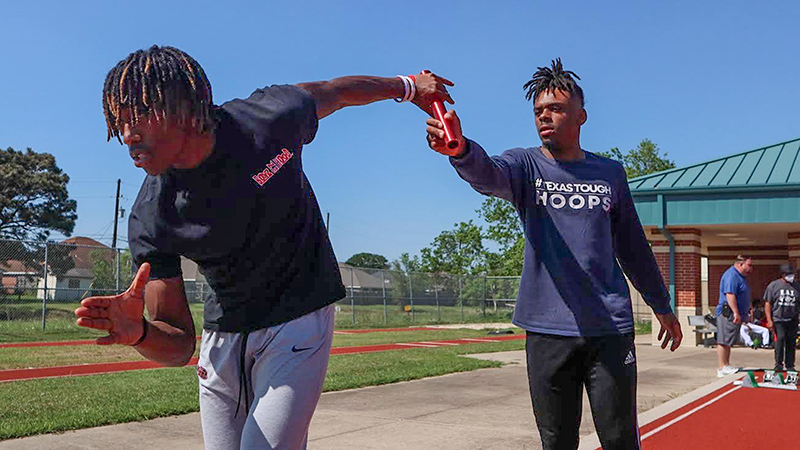 For many high school track and field student athletes, the best competition they face is from opposing runners at post-season meets. For Memorial sprinters, their best competition could be wearing the same logo.

Memorial’s Jah’mar Sanders and Jelani Chevalier are teammates in the relay events and both will compete in the open 100m dash, which is an individual event. They will join several other local track and field participants at the Region III meet in Humble this weekend.

Both have won the event throughout the season, but Sanders has come in first in the district and area meets with Chevalier close behind in second.

Despite the recent losses to Sanders, Chevalier’s confidence is not shaken as he claims to still hold the crown of fastest member of the Memorial track team. 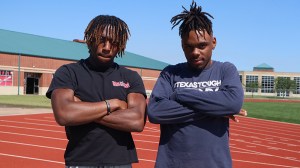 Both said having the other is a huge benefit when it comes to pushing each other to be their best.

“We go at it at practice all of the time,” Chevalier said. “We are both competitors. Having Jah’mar there definitely helps.”

The relay team has seen some changes throughout the course of the season, but both Chevalier and Sanders said they feel good about where the team is.

“Some things are out of our hands but we have good chemistry,” he said. “We lost two good runners, but I feel like we can pull through… I am definitely going against the fastest people in the country. I am going to go out there and compete. I am trying to run a 10.5 or a 10.4 and go to state. We really want to go to state for relays. The girls and boys are right there. The girls definitely have a shot at going to state.”

Sanders pushed back a bit on Chevaliers claims of the fastest runner on the team.

“We are competitive at anything we do,” Sanders said. “We could just be going to get water and we will see who can get their first. That translates on the track. We are in the same heat usually. I want to see him win and he wants to see me win… I’m still the fastest, though. He beat me one time. I will give him that. He beat me at our meet over here. I had a bad start out of the blocks.”

At the beginning of the season, Sanders said his goal was to run the 100m dash in 10.6 seconds. He said he has his time down to 10.5 and has set new goals.

Granger said Chevalier and Sanders have progressed well and provided leadership on the track.

“Sanders has been a leader the four years he has been here,” Granger said. “Whenever you have a leader like him on the football field and the track, it goes a long way. You need leaders on the track. Jelani is taking it in watching Sanders. It is going to be a big deal to have him coming back next year and being a leader. That is how you keep the program going in the right direction.”