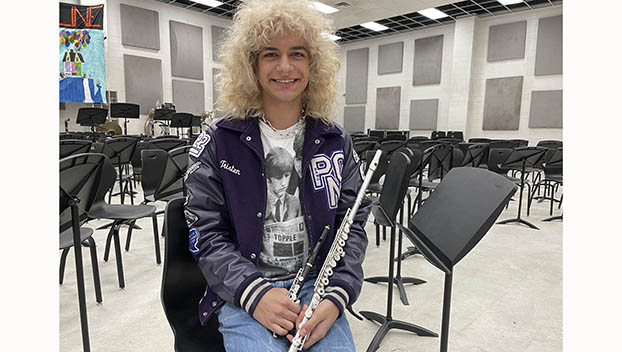 Tristen Balsano wears his heart on his sleeve — or, rather, both sleeves and his back. The Port Neches-Groves High School flutist’s letterman jacket is covered in patches from all-region, area and state bands.

While instruments have no gender affiliation, rarely does one see a male flutist. So what led Balsano down that path?

“Honestly, it was the only instrument I could make a sound out of,” he said.

His love for music began in elementary school, becoming part of the fifth grade recorder band. The following year, he immediately excelled in beginner band.

“I was one of the first people that was able to make a sound out of my instrument when it was fully put together. I was just a very fast learner,” he said. “I had already gone through our beginner book in a few months.”

That same year he would be one of only two sixth grade students chosen to compete in Solo and Ensemble. He would be first chair in eighth, 10th and 12th grade, and qualify for all-state as many times.

“I got a one, which is the highest you can make,” he said of his first Solo and Ensemble competition. 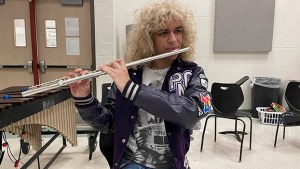 Tristen Balsano plans to study music at the University of Houston or Lamar University after graduating at the end of the school year. (Monique Batson/The News)

But it wasn’t just luck.

“In my 21 years as a music educator, I have had the pleasure of teaching many talented musicians who have made the all-state band and have gone on to be successful in their chosen field,” said PNGHS Band Director Alex Wells. “Tristen is by far the most talented musician I have had the pleasure of teaching. He couples his talent with dedication and hard work, which is what makes him so special. Additionally, he is kind and helpful to his fellow students — just an all around great person. I expect wonderful things from this young man.”

Balsano recently proved the words of his band director when he won the 2022 Concerto Competition by The Symphony of Southeast Texas. He earned $750 and in early April played his audition piece, Borne’s “Carmen Fantasie,” alongside the Symphony.

It wasn’t his first time to audition.

“I had competed in it four times before and I placed twice, but you have can only perform with them if you make first place,” he said.

“It was such an amazing experience. It really was,” he said. “Being able to just perform in front of a full theater of people listening to you and you only — it’s just such a different experience.”

During the performance at The Jefferson Theatre in Beaumont, Balsano had a solo with accompaniment by the members of the symphony.

“Practicing with them was a lot different than what I was expecting,” he said. “They followed along really easily, so I was able to do all the nuances I would normally take when performing it on my own. That was something I just wasn’t expecting considering this was a full symphony.”

In his spare time, Balsano also practices with the Houston Youth Symphony every weekend with a performance in late April or early May. He also enjoys art.

His four years of high school have been spent predominantly in Advanced Placement classes, and in the fall he plans to attend the University of Houston or Lamar University to study music.

“From there I’ll just hone in on my music skills and probably offer lessons to younger flutes,” he said. “And I want to try to earn a few more instruments, too. Right now I know clarinet, bass clarinet and trumpet. So from there I’d try to get a job with a symphony, because it’s a dream of mine to perform.”

He does have a Plan B.

“I think math is probably my favorite subject. I’m really good at it. I always tell myself if music doesn’t work out for me, I’ll end up being a math major,” he said.

Although, it seems music is working quite well.