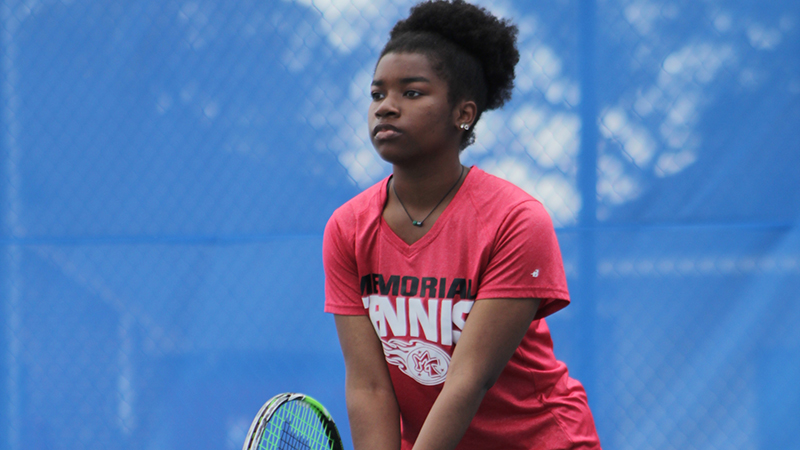 This year was Murry’s first season with the Memorial tennis team.

“As a senior, there was a lot for her to learn and not a lot of time for her to learn it,” Memorial Tennis Coach Robyn Summers said. “Even though she came knowing she would have to play varsity against players with much more court experience, she worked hard. She has always been a very level-headed, intelligent and determined player.” 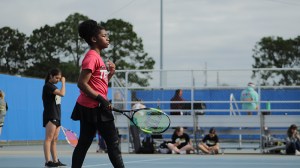 This was Hannah Murry’s first year to play tennis for Memorial. (Daisy Diaz/MHS)

Murry was one of a few players who came over from Wilson Early College to play on the team, Summers said.

“It is great to see how well those students balance school and sports,” she said. “You have a teenager taking college classes who still comes to practice every day and puts in the work to learn a new sport. She has done everything I’ve asked as a player. I have more-than-enjoyed having her on the team this year.”

Murry and her doubles partner won the consolation bracket of a few tournaments this year, Summers said.

Memorial Athletic Director Brian Morgan is happy to see student-athletes do well in the classroom.

“Every year, the tennis program has had some big strides,” Morgan said. “I think the JV boys won district. It seems like there is a ton of kids on the court each day. It might not be as well known, but there are a lot of kids participating, joining and getting their friends in it.”

Morgan knows that most people don’t usually make a living from playing sports, so he stresses that student athletes do well in the classroom.

“It is always good to get something paid for,” he said. “It could take a burden off a parent or even themselves. That is always a good thing.”

Murry told the Port Arthur Independent School District she was proud of her accomplishment.

“I felt like I was letting senioritis get to me,” she said. “I needed something or a sign to tell me I’ll be fine when I graduate. I felt like with the scholarship, I now have a more stable and secure future.”