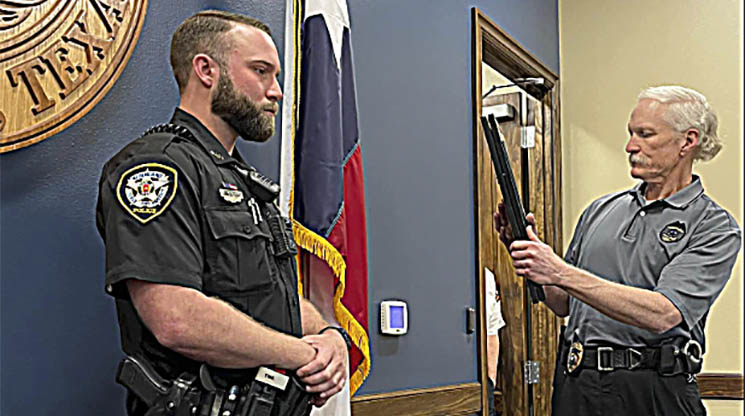 Nederland Police Officer Jacob King receives one of two commendations this week from Police Chief Gary Porter. (Courtesy of the City of Nederland)

NEDERLAND — Nederland Police Officer Jacob King recently received two life-saving commendations in front of city leaders. He attributed his actions and impacts to the high standard set by his peers.

“We’ll continue to do a good job as a department,” he said. “I am just one officer. There are 30 of us. We all do heroic things. We’ve made a lot of arrests for felony group 1 offenses. So every time I feel like we make an arrest for that, we’re saving a life in itself. I’m just one officer. All of us are doing a good job.”

King shared those sentiments this week in front of city administrators, the mayor and city council following presentations from Police Chief Gary Porter, who described the event as one of the best parts of his job.

“Officer King found someone who was overdosing on opioids and took quick and decisive action. He saved the people by performing CPR so first responders could get there and perform life-saving measures,” Porter said. “Today, two people are around who have Officer King to thank.”

According to Porter, Nederland Police were dispatched to CVS Pharmacy June 10 regarding an unresponsive man in the parking lot.

King arrived and found a woman yelling for him to help. He noticed the victim not breathing and without a pulse. He administered CPR for approximately a minute, which led to the return of the man’s breathing and pulse.

Police suspected the victim suffered from a drug overdose

On Aug. 20, Nederland Police were dispatched to Valero Tri-Mart because of an unconscious man.

King responded and met a woman, who said her son was in a vehicle leaned back in the front seat.

King found a man in severe respiratory distress and foaming at the mouth. His pulse was weak. King carefully removed the man from vehicle, placed him on his side and cleared his airway.

The pulse was now gone, so King performed CPR until it regained and EMS officials could respond.

A drug overdose was suspected in this case, as well.