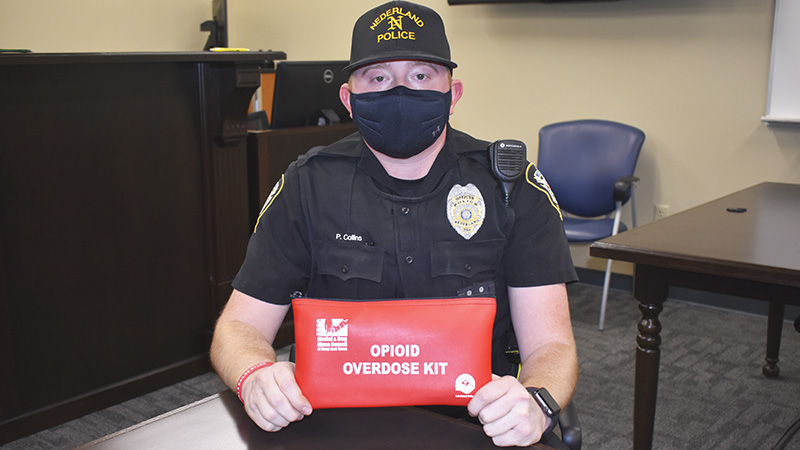 NEDERLAND — When Nederland Police Officer Peyton Collins recently arrived at the scene of a possible overdose, the victim was, by all appearances, dead.

The man had no pulse, wasn’t breathing, his eyes were rolled to the back of his head and his body was rigid.

But due to the quick thinking of Collins and a 4-mg life saving nasal spray of Narcan, the man is alive.

Nederland Police Chief Gary Porter said his officers recently started carrying Narcan and are trained in its use. The drug can also be used to help officers if they are exposed to fentanyl or other drugs that can be absorbed into the skin, he said.

Narcan is the brand name of naloxene, a prescription medication that temporarily stops the effect of opioids, according to stopoverdose.org.

“This helps a person start to breathe again and wake up from an opioid overdose,” according to the site.

The medicine is only effective against opioids. 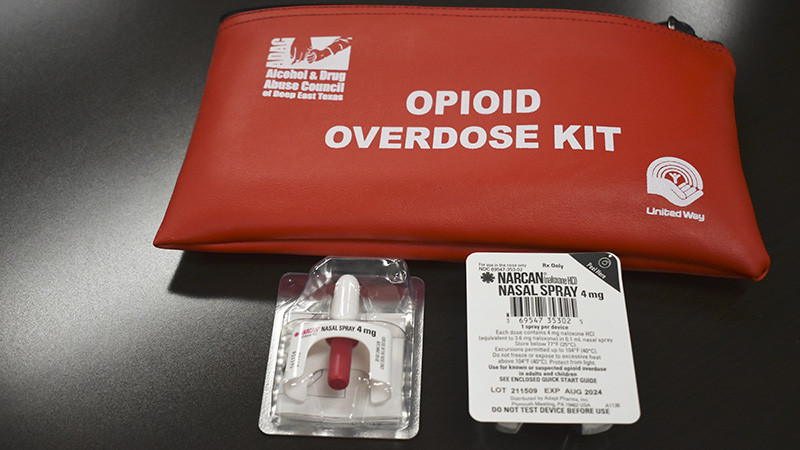 Narcan is the brand name of Naloxene, a prescription medicine that temporarily stops the effect of opioids, according to stopoverdose.org. (Mary Meaux/The News)

The overdose call came in Jan. 18 to Mid County Dispatch, which handles called for Nederland, Port Neches and Groves, requesting an officer at a residence in the 3000 block of Nashville Avenue.

Collins was in the neighborhood and responded immediately. Knowing it was a possible overdose, he brought in the opioid overdose kit that he places in his patrol car at the beginning of each shift.

“There have been quite a few overdoses and we are finding drugs laced with fentanyl around town, so we wanted to step up our game, where we can respond to an overdose,” Porter said, adding that sometimes police arrive on scene before the ambulance does. “We thought it might save a few lives with Narcan and it paid off in one month.”

Collins knew through communication with dispatch that the caller was performing CPR on the victim and had to stop to answer the door. The officer quickly began to assess the situation: What happened? How long had the man been like this? Did he take anything?

The latter question being the most important to avoid administering Narcan to someone suffering from a medical condition rather than an overdose.

Collins already had his gloves on and the Narcan ready when he called out to the victim to see if he was alert.

“He didn’t respond. I checked his pulse and didn’t feel a pulse at all. His eyes were slightly open and I was trying to look for his pupils,” Collins said. “Both of his eyes were rolled in the back of his head. Obviously that’s not a good sign either.”

The officer believes the man, who is in the early 20s, took street level oxycodone, “not pharmaceutical grade,” to deal with pain management. The street drug was likely cut with fentanyl.

“He was dead. As he was laying right there, he was dead for sure,” Collins said. “Basically when you see a person with no pulse and not breathing, you assume they’re dead.”

Collins tilted the man’s head back and administered the Narcan in his left nostril. The medicine is a one-dose spray, he said.

By that time Sgt. Chase Romero arrived and they put the man on his side, which allows the medicine to move further in the body. Romero began to perform a sternum rub, which woke the man.

“He was asking what happened. He was very confused. He didn’t know that he overdosed. Didn’t know that he pretty much died or was dead,” Collins said. “I’ve seen numerous, numerous overdoses. They are a huge problem nowadays with everything on the street being cut with fentanyl.”

Collins said there’s at least one overdose per week in Mid County, and sometimes he’s heard of there to four in one night. When that frequency happens, police know there’s a bad batch of drugs on the streets.

This marked the first time Nederland Police used Narcan. And while the use of the life-saving medicine might not seem like something a police officer would do, Collins feels it’s part of the job.

“We have a duty to protect life,” he said.

The victim in this case is not a typical drug user, he said.

But this guy, I think this was an accidental overdose and it almost cost him his life.”

Whether the overdose victim was a frequent user or not, Nederland police now have the tools to save lives when seconds count.

And, if the overdose had occurred two months ago, the outcome could have been deadly, especially if the ambulance were in another town.

Collins gave credit to the dispatchers who kept up with the call and kept tabs on the timing of the medication administration. If the medicine doesn’t work within a specified amount of minutes, a second dose can be given.

He also gave thanks to Sgt. Romero, Officer Alex Bell, Officer Grayson Fanette and to the Alcohol and Drug Abuse Council of Deep East Texas, which provided the opioid overdose kits to NPD.