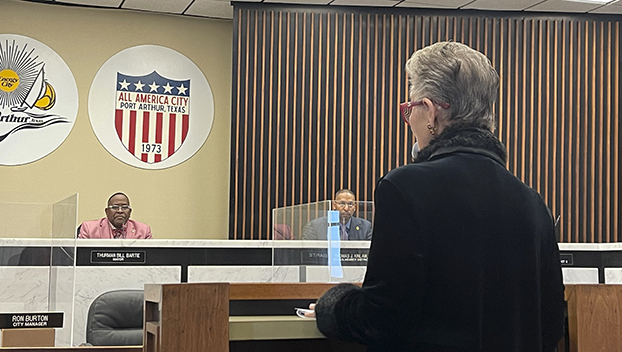 Deborah Freeman’s pain was palpable Tuesday morning as the grieving mother stood before Port Arthur councilmembers to talk about security measures following the shooting death of her son.

“I’m speaking to you today because on…” she said, pausing as she began to cry, “January 21 of this year my son was murdered at an apartment complex.”

Marcus Freeman’s body was found on a Friday afternoon inside a vehicle at Normandy Apartments. It was the second of four homicides this year, and one that shocked the community at large. 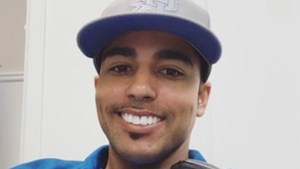 “I knew Marcus — a good guy, a real sweet guy,” said Councilman Thomas Kinlaw. “I was shocked when I found out about that situation.”

Kinlaw wasn’t the only person at the front of the room to know Marcus Freeman, whose brother Derrick Freeman had served on council from 2011 to 2019, the last three years as mayor.

And it was in a familiar room to familiar faces that Deborah Freeman brought concerns about a lack of security measures at area apartment complexes.

“Residents and guests of apartment complexes have a right to feel safe and secure while on the premises,” she said. “Security cameras are relevant to analyzing whether a shooting or robbery may be prevented. The Normandy Apartments have no form of security in the entire complex — not one security camera nor lighting that’s sufficient.”

Marcus Freeman’s body was found on his 34th birthday. Police have not released details regarding the crime, such as a potential motive or whether or not a person of interest has been identified.

However the victim’s mother shared some of the painful details as she made her plea.

“Eight shots,” she said. “They shot him in the head and the chest. It’s just unbelievable. They didn’t have to kill him like that. I don’t know that they didn’t just go in there with the mentality to kill Marcus, because you don’t put eight bullets in someone thinking you’re just going to hurt them. You’re wanting to kill them.”

The gunshots, she said, had been picked up on a neighboring doorbell camera. And the person who found his body was someone she personally knew.

“The woman that found my son, I had just sold her house in July,” the realtor said. “So when she called me and told me she was so very sorry, I knew God had her call me. He did because I’d been tormented the night before about what my son looked like. She described the scene so much better than I had pictured…and I told her thank you for it.”

Deborah Freeman addressed council less than 48 hours after Port Arthur police discovered a residence at Encore at 9th Avenue apartments had been hit twice by gunfire. Officers were called to the scene in the 3607 block of Jimmy Johnson Boulevard at 10:23 p.m. Sunday.

Additional details were not available by press time Tuesday. However, Police Chief Tim Duriso said it’s possible the shooting had taken place prior to its discovery.

“I’m asking that the Port Arthur City Council help our police department by requiring apartment complexes to provide adequate security for residents and visitors,” Deborah Freeman said. “There needs to be an ordinance in place, if that’s possible, that requires these complexes to provide security, lights and cameras.”

In July, Avery Trace Apartments on FM 365 put up signs advertising the addition of security cameras. 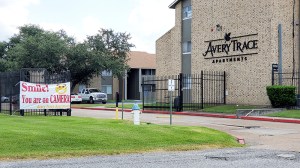 A banner near an entrance to Avery Trace Apartments at 4020 FM 365 alerts of the use of security cameras. (Mary Meaux/The News)

The location had been relatively known for its violence.

Councilwoman Charlotte Moses said the council took action to have security cameras installed there due to the amount of shootings, particularly fatal ones.

And since July, Duriso said, there has been a significant reduction in violent crime at the complex.

“It was a helpful suggestion,” he said. “We still make calls out there but we haven’t had the more serious calls since the suggestion was made.”

In addition, he said, the department has added an increased patrol in the area.

Moses, on Tuesday, suggested the council meet with the owners of other local apartment complexes to discuss security measures.

“We understand they have to have the budget; they have to have the money to do that,” she said. “But we could be able to impose some strings on the owners of the apartment complexes where they can put in their budgetary dollars that they have cameras and security measures in place. The mayor always says, ‘Come to Jesus meeting.’ I think this is one we need to have a meeting about, trying to see what we can do and where we can start.”

Port Arthur City Attorney Valecia Tizeno said currently the city operates by the International Building Code, which addresses exterior lighting but not cameras on private property. However, she said, there have been meetings with the district attorney’s office in the past regarding actions that can be taken in areas that see a high amount of violence.

Following the meeting, Duriso spoke with the regional boss for Normandy Apartments, and said she’s open to the idea of adding cameras to the property.