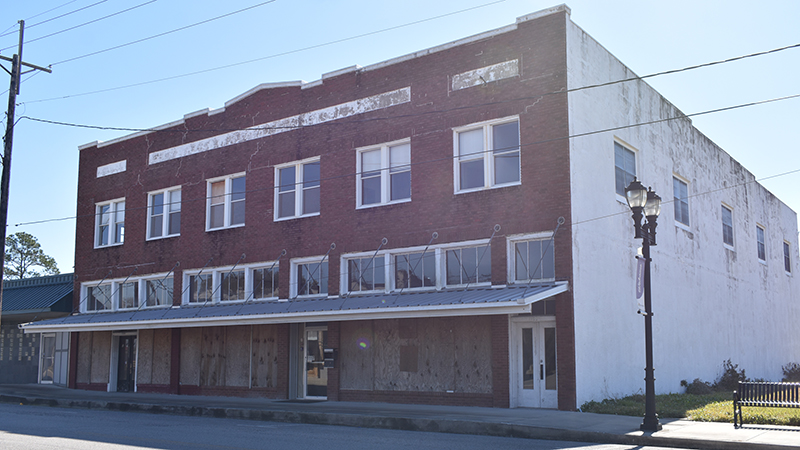 When I was younger, the subject of history just wasn’t that interesting to me.

It was all boring dates on things that happened way before my time.

Now that I’m older, I get almost giddy when learning some historical fact, especially if it pertains to the area.

So I became interested when the folks at Neches Brewing Company asked on social media for historical information about the building they hope to move into next year.

Located at 1117 Port Neches Ave., the building is in the heart of historical downtown Port Neches.

One of the owners, Tyler Blount, said people have come out of the woodwork with information and he even did some of his own investigating by speaking with previous owners and tenants.

“I didn’t realize the post would gain so much traction,” Blount said with a chuckle.

The business owner has learned some interesting things about the large, two-story brick building. It was built in 1923 and served as Goolsbee and Clark mercantile/department store.

People have sent him maps labeling landmarks and businesses and passed on news articles and stories. There’s the story of a little boy who got into trouble at school so his parents placed him in a smoke house as punishment. While there was no meat smoking in there, there were peaches being fermented. The boy ate a bunch then passed out on the floor, likely drunk.

The old safe from days gone by is still there, he said. He found out it was the city’s first safe and townsfolk would store their money there though the bank was across the street.

The first elevator in Jefferson County was located in the Port Neches Avenue building. Blount believes it was still working as late as the 2000s. And while it was taken down and no longer in use, all of the parts are still there.

I spent a little time on a digital archive and found out that on Aug. 27, 1932, someone broke into Goolsbee and Clark and stole “loot valued at $100 including nine suits of clothes, 20 shirts, six handbags and suitcases, hose, shoes and other articles.”

Then, in October 1934, the building served as a meeting place for the equalization board for residents whose valuations were raised. The city tax assessor J. W. Singletary told them their valuations would be approximately the same as the past two years.

Blount said there have been offices for dentists, doctors and lawyers in the building. Leo Weeks Photography was also housed there once, as well as other businesses.

Blount said he will incorporate the history into what will be the new home for Neches Brewery.

“I’m reaching out to people to try and get hold of photos of the building and any type of photos of historic downtown. I want to hang them in black and white,” he said, calling himself a history nerd.

The photos will show the history and the great things that happened in the community while respecting the history of the building.

The brewery owners hope to open in the “new” building next year, which just so happens to be the 100th anniversary of the structure.