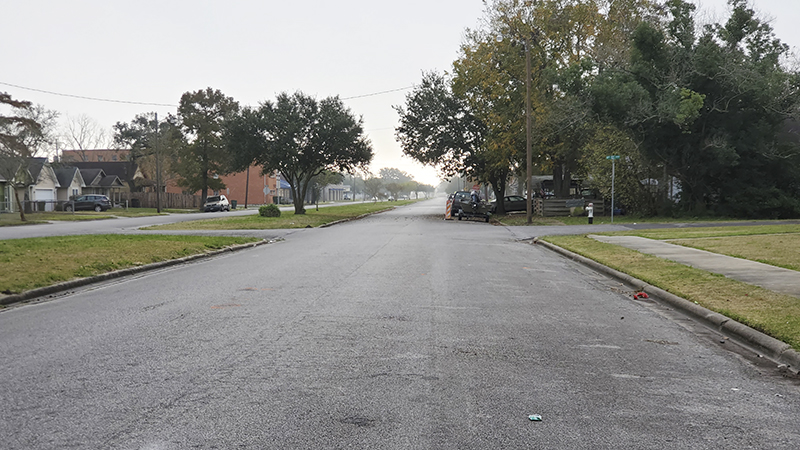 The area in which a man was fatally struck by a vehicle Wednesday night on DeQueen Boulevard in Port Arthur. (Mary Meaux/The News)

Michael Hayes was with his longtime friend Tony Oville on Wednesday night when the man crossed the street in front of his house and was fatally struck by a vehicle.

Hayes stayed with his neighbor in the 1100 block of DeQueen Boulevard until he died.

Hayes said Oville had been drinking when he started to cross the road and fell, knocking himself unconscious.

His friend, who Hayes said was 58 years old, was wearing dark colored clothing when he fell.

That’s when a vehicle driving down DeQueen ran over Oville’s body as it lay in the street, Hayes said.

Justice of the Peace Precinct 2 Marc DeRouen, who made the death pronouncement, said police received the 911 call at 8:43 p.m. Wednesday and responded immediately. According to DeRouen, there is an active Port Arthur Police investigation.

Port Arthur Police said no arrests have been made as of Thursday morning, and the driver of the vehicle who struck Oville is cooperating with authorities.

A family member on the scene Thursday confirmed the victim was Tony Oville.

The men and others were gathered at Oville’s drinking when the vehicle crash happened. From outside his home, Hayes pointed to Oville’s house, saying the man’s shoes were still there on his driveway.

But there are other things Hayes believes factored into the death.

A street light at 11th Street and DeQueen is gone. The pole remains but there is no light fixture there. He said at night it is very dark.

“And people fly down here like a race track,” Hayes said noting there once was a traffic light at 10th Street down the road but it is no longer there. Vehicles, he said, disregard the stop signs along the boulevard.

The driver of the vehicle in the fatality did stop at the scene.

“If he’d been looking, if he’d been watching, he never would have ran over that man. He was not doing what he was supported to do,” Hayes said.

Hayes said he grew up with Oville and went to the same elementary school. They once boxed in the same gym together.

“I was right there when he died,” Hayes said.

Orange symbols on the roadway in front of Oville’s house indicate where the auto-pedestrian crash occurred.

Hayes said his friend was once a professional boxer, served in the military and had been a prison guard.

“That man was a good man,” Hayes said.

While Hayes spoke with Port Arthur Newsmedia, several vehicles either honked at him or stopped by. One unidentified man stopped, parked and spoke with Hayes, who gave him the news that Oville had been “run over last night.”