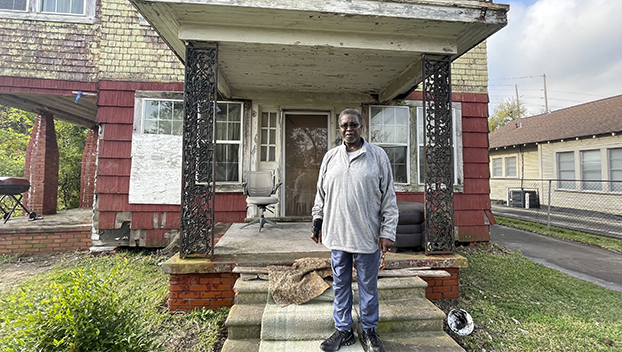 Reginald Trainer moved slowly Thursday morning, his head down as he walked from his truck to his cousin’s house.

It had only been approximately 12 hours since his relative had been fatally struck in the road in front of his Port Arthur home.

“His mother and my dad were sister and brother,” Trainer said. “I’m trying to straighten out everything. It’s so tragic. I’ve got to let the family know; keep the family informed on what’s going on.”

While he remained melancholy, Trainer’s voice filled with pride when he spoke of Tony Oville’s military past.

Not long after graduating high school, the man who was 58 at the time of his death joined the U.S. Army in 1983.

He served as a cannon crewman, was considered a marksman and hand grenade expert, and received an Army Service Ribbon prior to being honorably discharged in 1984 and remaining as a reserve through 1989. 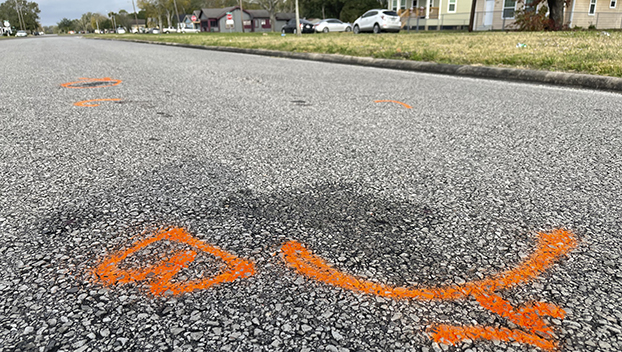 Marks made by police remained on DeQueen Boulevard Thursday morning, 12 hours after a man was fatally struck in front of his residence. (Monique Batson/The News)

It was one of the reasons Trainer was at the home in the 1000 block of DeQueen.

He wanted to ensure his cousin had a proper military burial.

“He was a vet, so I had to come get his paperwork,” Trainer said. “Thank God I was able to find it.”

Oville had been with his longtime friend Michael Hayes and a few others at approximately 8:40 p.m. Wednesday when — dressed in dark clothing — he went to walk across the street, fell and struck his head, rendering him unconscious. He had, Hayes said, been drinking.

Not long after, a vehicle driving down the road ran over the man as his body lay on the pavement.

Port Arthur police on Thursday said no arrests had been made, and that the driver of the vehicle stopped at the scene and was cooperating with authorities.

Hayes said he stayed with his friend in the road until he died, pronounced at the scene by Justice of the Peace Precinct 2 Marc DeRouen.

And on Thursday morning, the victim’s shoes were still at the edge of his driveway, not far from the orange spray paint marks left in the roadway by officials.

“I was right there when he died,” Hayes said.

The man’s friend told Port Arthur Newsmedia he believes there were other contributing factors that could have prevented Oville’s death.

A street light at 11th Street and DeQueen is gone. The pole remains but there is no light fixture there, leaving the intersection dark at night.

“And people fly down here like a race track,” Hayes said, noting there once was a traffic light at 10th Street down the road but it is no longer there. Vehicles, he said, disregard the stop signs along the boulevard.

Still, he shared fond memories of the man he had known most of his life.

Hayes said he grew up with Oville and the two went to the same elementary school. They once boxed in the same gym together.

“That man was a good man,” Hayes said.