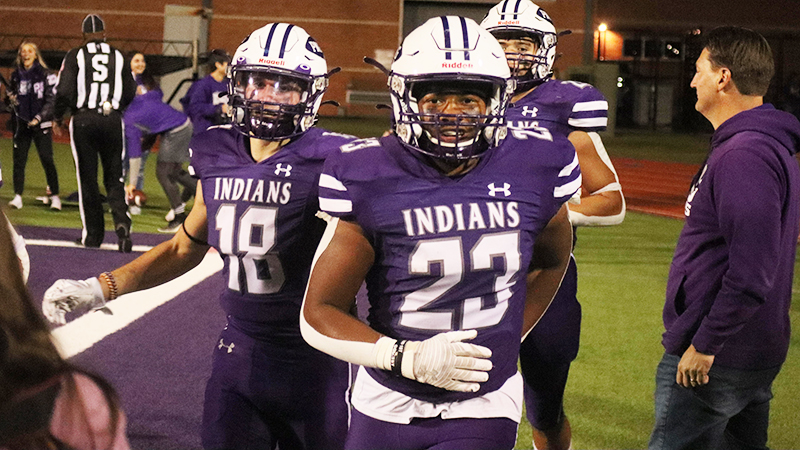 The Port Neches-Groves Indians cruised to an easy win in their final game of the season Friday, beating Santa Fe 56-0 to earn the No. 3 seed in the upcoming playoffs.

Running back Koby Trahan got the scoring started as he punched in a touchdown from 5 yards out to give the Indians a 7-0 lead with just under nine minutes left in the first quarter.

After a fumble recovery, quarterback Cole Crippen ran in the Indians’ second score from inside the 5-yard line to give PNG a 14-0 lead.

Crippen connected with Carson Wallace for the third score of the quarter giving the Indians a 21-0 lead at the close of the first period.

In the second quarter, backup quarterback Austin Glaze ran the ball into the end zone from two yards out to give PNG a 28-0 lead with 11:55 left in the quarter.

Crippen and Wallace connected again with just under 10 minutes left in the game to bring the score to 35-0.

The story was much of the same in the second half as quarterback Shae Adams got on the board twice. The first was a 2-yard touchdown run and the second was a pass to Gavin Bodin, which brought the score to 56-0 in the third period.

PNG earned a playoff spot for the eighth consecutive year.

PNG will travel to Galena Park to take on the Yellowjackets in the Bi-district round of the 5A-II playoffs. Kickoff is set for 7:30 p.m. Friday.