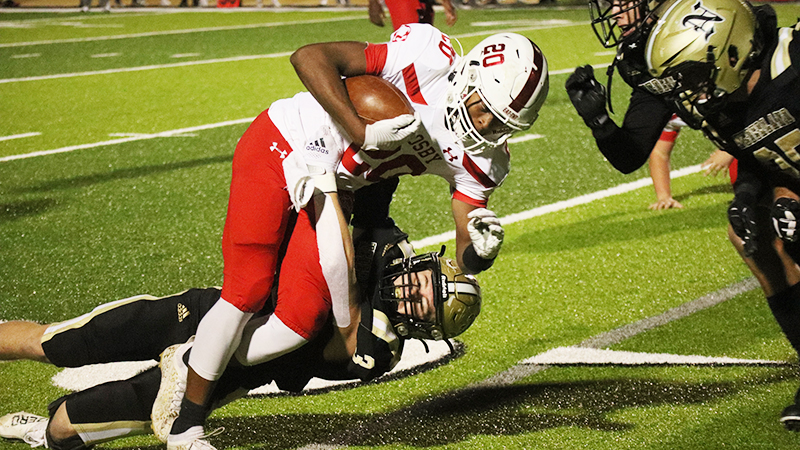 A trio of Nederland defenders swarm to the Crosby running back. (Chris Moore/The News)

NEDERLAND – The good news was Nederland’s defense is the first district team to hold Crosby under 50 points this season.

The bad news is the Cougars still pulled out a 31-17 win over the Bulldogs in District 12-5A action Friday night at Bulldog Stadium.

The loss dropped Nederland to 6-4 overall and 3-4 in district play. Crosby captured the district championship with a perfect 7-0 record and is 8-2 overall. 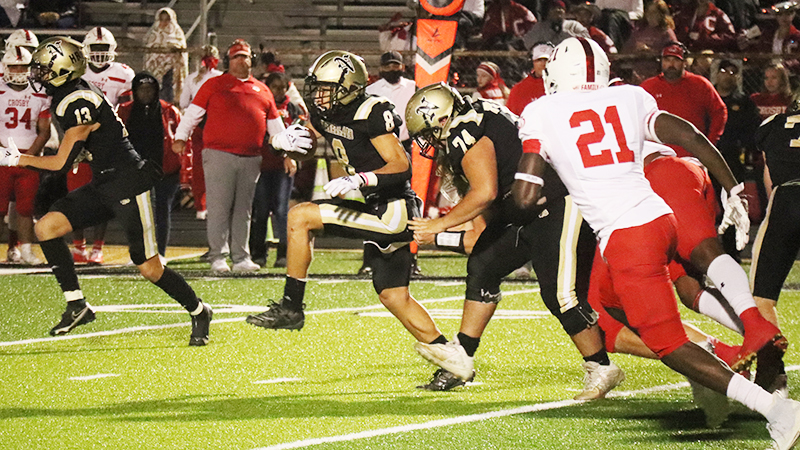 “We challenged our kids on the field right after the game last Thursday at Kingwood Park and I couldn’t be prouder of what they did, how they played tonight and the effort they gave,” said Nederland coach Monte Barrow.

“We talked all week about making sure it was a game at halftime and then see how it goes after that.

“Crosby, they will go and make another run at it. I don’t know that they’re not better than they were last year. They have speed all over the field.”

With the game tied at 10-10, Crosby received the second half kickoff and marched straight down the field to take the lead for good. Cyrin Myles hit Kameren Kirkwood for a 20-yard completion. Quincy Jones ran five straight times. Myles capped the drive with a 2-yard run to put the Cougars up 17-10.

Nederland tried a fake punt on their first possession of the second half, which was unsuccessful. The Cougars took advantage of the good field position and put together another scoring drive. 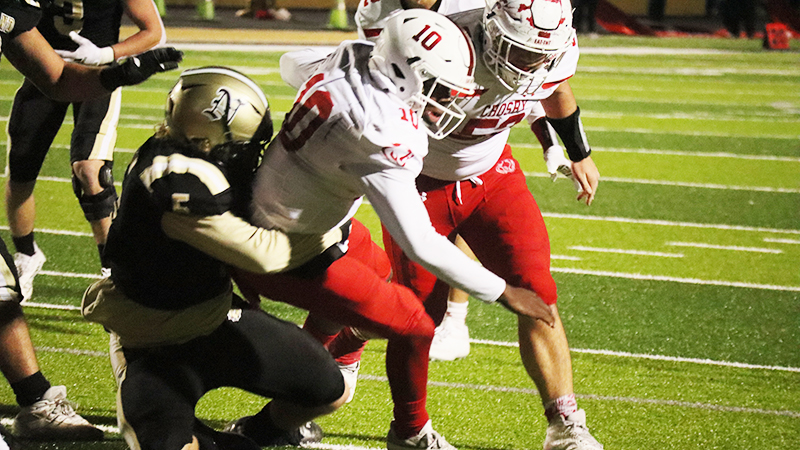 Myles hit Branden Womack for 18 yards to the Nederland 8. Myles called his own number again, this time on fourth-and-goal at the 1 to extend Crosby’s lead to 24-10 with 4:14 left in the third quarter.

The Bulldogs turned the ball over own downs on an incomplete pass on fourth-and 14 from the Crosby 40. The Cougars made it three straight scoring drives.

Myles hit Kirkwood on a 10-yard scoring strike to make the score 31-10 with 6:59 left in the fourth quarter.

Nederland then put together a scoring drive. Luke Broussard scored on a 1-yard quarterback sneak with 4:49 reaming to make the score 31-17.

Nederland received the opening kickoff and rolled the dice on fourth-and-two from its own 39.

The Bulldogs had a receiver open behind the secondary, but the pass was a bit overthrown to turn the ball over on downs. 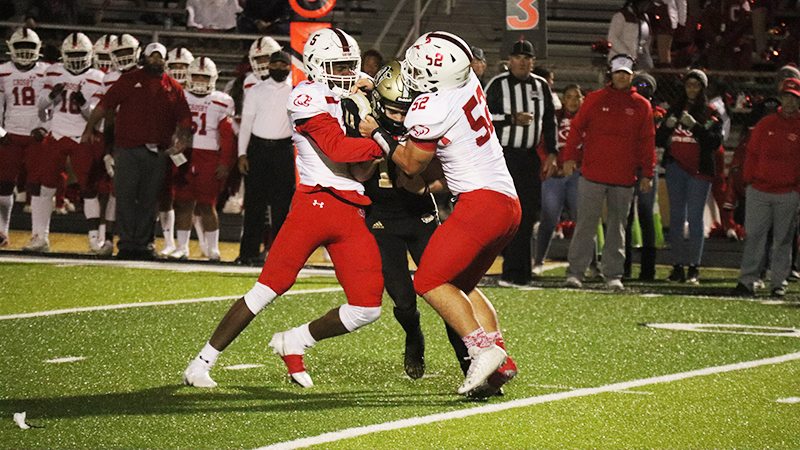 Nederland quarterback Luke Broussard gets brought down by a pair of Crosby defenders. (Chris Moore/The News)

Crosby’s first possession looked promising. A 14-yard run by Myles was followed by a 15-yard run by Jones that gave the Cougars first-and-goal at the 8. Following a 1-yard run by Jones, Myles threw an incomplete pass and then Myles scrambled for six yards to the 1.

The Cougars also decided to go for it and a bobbled snap led to a 1-yard loss as they also turned the ball over on downs.

Taking over at its own 2, Nederland was able to advance the ball up to the 25 before the drive stalled and they had to punt the ball back to the Cougars.

Crosby put together the game’s first scoring drive on its second possession of the game. Myles hit Kristian Roberson for 15 yards. Myles connected with Kirkwood for a 16-yard scoring strike to give the Cougars a 7-0 lead with 31 seconds left in the first quarter.

Nederland’s offense was once again forced to punt. Again, Crosby was able to put together a scoring drive. Roberson ran for 12 yards on an end around.

Myles hit Womack for 14 yards. The drive stalled at the 11, so Trevor Helburg kicked a 28-yard field goal to give the Cougars a 10-0 lead 7:46 remaining in the second quarter. 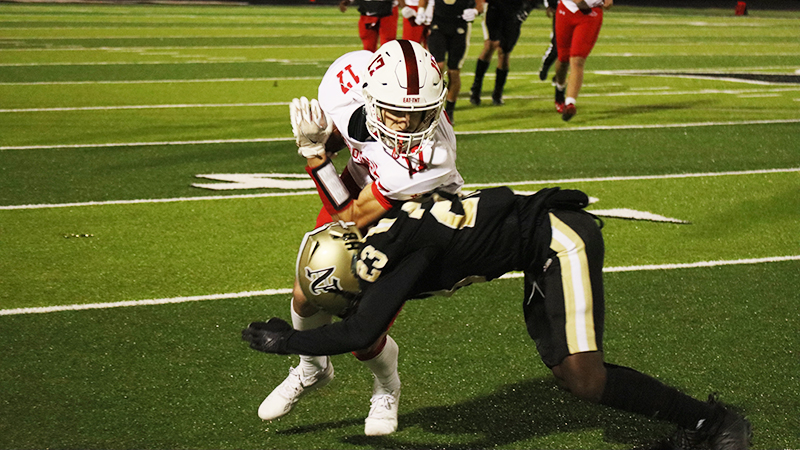 Broussard capped the drive with a 32-yard scoring strike to Kendrick on a slant route to make the score 10-7 Cougars with 5:19 left in the second quarter.

Nederland’s defense forced a three-and-out and the Bulldogs offense went back to work with a drive to close out the first half. Taking over at their own 7, the Bulldogs’ 12-play scoring drive. A Broussard 9-yard completion to Dominic Stimson on third-and-four kept the drive going.

After driving all the way to the Crosby 15, the Bulldogs had to setting for a Carter Piletere 42-yard field goal to tie the game at 10-10 as time expired to end the first half.

The Play Of The Game Was…Crosby’s Cyrin Myles 2-yard touchdown run to break a 10-10 tie early in the third quarter to give the Cougars the lead for good.

Up Next…This was the final game of the season as Nederland will narrowly miss a playoff berth. Crosby is the District 12-5A champions and will host a first-round playoff game next week.