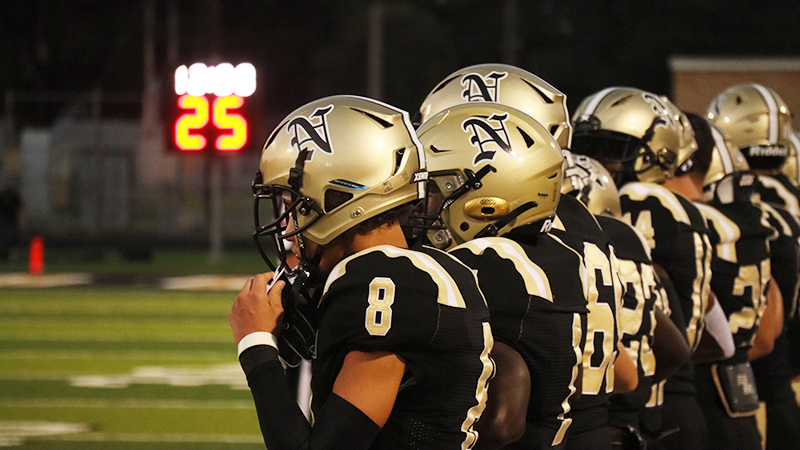 The Nederland Bulldogs line up prior to a game. Chris Moore/The News

NEDERLAND — There are a couple of ways in which the Nederland Bulldogs can make the playoffs. No matter the scenario, the Bulldogs are dependent on another team to help them out.

Kickoff is set for 7:30 p.m. Friday and will be senior night for Nederland.

The Bulldogs are in fourth place in the district with Barbers Hill (4-2) in third, Texas City (5-1) in second and Crosby in first.

The first scenario requires Nederland to upset the Cougars and for Barbers Hill to beat Texas or a Port Neches-Groves loss to Santa Fe, who has not won a game all season.

Nederland is coming off an upset loss to Kingwood Park last week. Head Coach Monte Barrow said his players understands what they are going up against.

“We’ve told the players all year that you have to control what you can control,” Barrow said. “There are things you can control in every part of your life and what we can control this week is our game. You never want to be in a position where we want to rely on somebody else. We’re hoping for a certain outcome in other games, but it doesn’t matter if we don’t take care of business.”

Beating Crosby will not be an easy task but also not an insurmountable one. Several starters for Nederland played large roles in upsetting the Cougars last season to claim a share of the district title. Crosby went on to play in the State Championship game.

“It can go both ways,” Barrow said. “They have guys that played in that game and aren’t happy about that outcome. Two years ago, it was an overtime game. These games are about matchups.”

Nederland’s offense, which struggled to find success at times this season, must manufacture yards against a Crosby defense that is second to last in the district in passing yards allowed. Teams often are trying to play catch up as the Cougars have scored at least 50 points in each of their district games.

Nederland’s defense, which ranks second in the district, will have to put together its best performance of the year.

Linebacker Jaice Beck said he and his teammates are ready.

Friday will be the final game in Bulldog Stadium for the seniors. Beck thinks there will be a big home-field advantage.

“The atmosphere is always great at Bulldog Stadium,” he said.

Those who are not able to make it out to the stadium can catch the live stream on the Sheffield Productions YouTube channel.